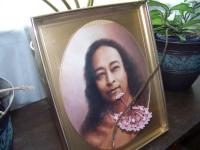 I want to tell you about my friend, Sanandi Reardon, and her miracle plant.

Sanandi and I have known each other for many years. She is a deeply devoted disciple and Kriyaban who lives in Carson City, Nevada. She is unable to visit Ananda that often, though she tries to come at least once a year. She’s always a bit strapped for income, but she always gives what she can to the Ananda Annual Appeal.

Sanandi recently was laid off (again) from her job at a health food store which is having to close its doors because of the economic downturn. She has raised children of her own and also three step-sons, and now has grandchildren. All in all, she is a truly great soul and a good friend.

Through all her life challenges and for as long as I have known her, Sanandi has continued to send me dozens of letters, cards, notes, photos, and gifts every year–always upbeat, always brimming with God and Guru’s love. Recently, in one of her letters she related a truly remarkable story about a house plant she owns, including a photo to prove it.

Sanandi has always maintained a beautiful meditation room where she practices Energization, yoga, and meditation daily. She decorates it beautifully and loves to spend time there.

Part of the décor of her room are many beautiful house plants. A few months ago she noticed that her hoya plant had produced a unusually long flower stem. The stem proceeded to grow out of its pot, turn a sharp corner and nestle itself right up against her framed color photo of Yogananda, just below his chin. If she turned the plant in any other direction, the flower on it’s long stem would return to it’s position touching the photograph.

A hoya flower is really a lot of smaller flowers all clustered together, hanging off a single bare stem–looking a bit like a lot of little pink trumpets grouped together.

So if this event was not miraculous enough, one day, one of the individual pink trumpet flowerets turned itself in the opposite direction from the way all the rest of the flowerets were facing, so that it could reach up and actually “kiss” Yogananda, right on the chin.

Here are the contents of the note she wrote me to accompany the photo:

“July 24, 2009, Dear Savitri, I thought it was special when the Hoya plant produced a flower for Master (Paramhansa Yogananda), but when the little flowerets separated from the whole to offer itself to Master, I was stunned. I couldn’t wait to share this picture with you. I call it ‘Master’s Latest Devotee.’ Love and Blessings, Sanandi”

I was stunned too and asked her if it would be OK to share this story as a blog on our website. She was happy to say yes. So thank you to my dear friend, Sanandi and to her special devotee plant, also.

This story reminded me very much of the story told in The New Path, Swami Kriyananda’s autobiography: “[Paramhansa Yogananda’s] sensitivity to all living things inspired sensitivity from them in return. Not only people and animals, but even plants seemed to respond to his feeling for them. His gardens flourished. Tropical mangoes and bananas grew at Mt. Washington, where the climate is not conducive to their survival.

Shraddha Mata (Miss Sahly) told of watching one day what she called a ‘rose devotee,’ which kept turning in its vase to face Master as he moved about the room. When he was sitting in his chair, she noted that the rose was facing him. Twice, however, when he was called to the door, she noted the rose facing in that direction. Several repetitions of change of directions finally caused this event to surface in her mind.

‘Sir,’ she said finally, ‘you have a new devotee.’ She indicated the rose which, now that he was seated again, had turned back toward him.

He looked at it for a moment, then smiled.”

‘Plants,’ Master explained, ‘have a degree of consciousness.’ Above all, like every sentient being, they respond to love.