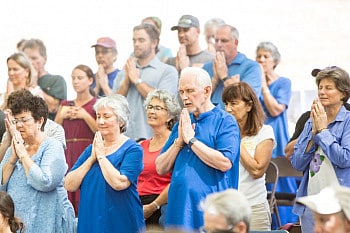 Sangha is used in many traditions such as yoga and Buddhism to denote the community of people devoted to the spiritual search. It traditionally refers to a community of ordained monks or nuns. In recent, however, the term has expanded to include a broader population of lay practitioners. (1)

Thich Nhat Hanh, Vietnamese Buddhist monk and peace activist, has described sangha as a “beloved community.” (2) Whether the sangha is a family or larger community, it includes people who are engaged in serving and bringing joy to one another, and who inspire each other to contribute. Hanh stresses the contribution of every individual to the community, and of the community to the greater world. (2)

Yogananda spoke similarly about the importance of a worldwide fellowship; every person contributes to civilization in a spirit of brotherhood. (3) Many people choose to follow the way of Ananda Sangha. In doing so, they take vows not only to the universal spirit and the practice of self-realization, but also to the service of fellow beings. For example, Ananda Sanghis “seek fellowship with other willing to join hands in this loving labor for universal upliftment” and commit to practicing at least one serviceful act per day. (4) 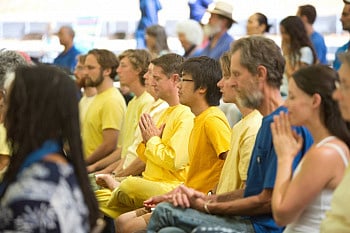 The Ananda Sangha also provides people with two options for formal renunciation as Brahmacharis or Sannyasi. Brahmacharis renounce family ties in an inward path of realization. Sannyasi, after starting as Brahmacharis, choose to view all beings as brothers, sisters, fathers, mothers, and friends. The sangha and renunciate orders began with the founding of Ananda Village near Nevada City, California, by Swami Kriyananda. (4)

Although the yogic path has primarily been a tradition of solitary spiritual pursuit, the term yoga sangha now refers to a growing community of yoga practitioners especially in the Western world. Individuals are encouraged to be inclusive and practice within a greater community context. (1)