That there is no historical reference to Babaji need not surprise us. The great guru has never openly appeared in any century; the misinterpreting glare of publicity has no place in his millennial plans. Like the Creator, the sole but silent Power, Babaji works in a humble obscurity.

—Paramhansa Yogananda, Autobiography of a Yogi 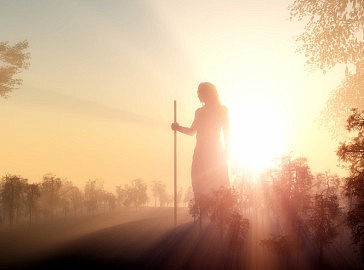 Babaji simply means “revered father.” Though the great master’s birth name and date are unknown, his subtle spiritual influence is felt throughout the world. It was he who re-introduced the ancient science of Kriya Yoga, which had been lost through the dark ages due to “priestly secrecy and man’s indifference,” as Yogananda put it.

Babaji is well aware of the trend of modern times, especially of the influence and complexities of Western civilization, and realizes the necessity of spreading the self-liberations of yoga equally in the West and in the East.

Babaji’s mission in India has been to assist prophets in carrying out their special dispensations. He thus qualifies for the scriptural classification of Mahavatar (Great Avatar). He has stated that he gave yoga initiation to Shankara, ancient founder of the Swami Order, and to Kabir, famous medieval saint. His chief nineteenth-century disciple was, as we know, Lahiri Mahasaya, revivalist of the lost Kriya art.

—Paramhansa Yogananda, Autobiography of a Yogi

A Vision of Babaji

Question from Priya: I am a spiritual seeker and i do not follow any particular guru. Couple of days ago early in the morning i saw vision of Mahavatar Babaji. He looked radiant…

How Can I Meet Babaji?

Question from niti: I had put up a pic of babaji and started talking to him. One day in dhyaan I experienced tremendous energy and khechari mudra spontaneously. Since then whenever I think…

Discovering the Essence of All Religions

Question from KJ: Master talked about great saints from all religion. But I never found anywhere Master taking about Mahavira or any other Jain Saints. Was there any special reason for this? In…