About the Author
Nayaswami Seva 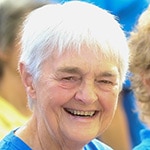 Seva was a founding member of Ananda, and lived at Ananda Village and other Ananda colonies from 1968 to 2021, the year of her passing. Her many years of service included taking charge of the fledgling community’s finances and helping to start new Ananda centers on the West Coast of the U.S., in Europe, and in India. Seva was a true pioneer.

Her constant service (which is what “seva” means), good cheer, wise counsel, and humility inspired countless souls. She did not see herself as a teacher, but she did offer spiritual counsel to many, many people.

Unfailingly cheerful and loving under all circumstances, Seva had a deep understanding of the spiritual path, born of a lifetime dedicated to God.