I first encountered Ram Dass when I bought his newly published book Be Here Now in January 1971. A man was selling copies of it out of the back of a van parked alongside the San Jose State College campus. I had very little idea about who Ram Dass was at that time, but the book looked interesting, and I was still seeking spiritually.

In fact, I had been seeking spiritually for the previous 3 years without finding what I was looking for. I still wasn’t clear about what the important aspects of the spiritual path would be for me. And then I read Be Here Now…..

Somehow, through reading that very unusual book, the message, and vibration of what a seeker needs in order to find God came through for me very clearly at that time. I have been eternally grateful that I happened upon this book.

I finally understood that the spiritual path at its core is about devotion and the guru-disciple relationship.

And what was the message and vibration that I found in this book? It was that I finally understood that the spiritual path at its core is about devotion and the guru-disciple relationship.

I didn’t really know who Ram Dass was or anything about his guru, Neem Karoli Baba, but the vibration of devotion to the guru in this book was so sweet and so dynamically presented that it captured my heart. At last I knew what I was looking for.

Interestingly enough, the book didn’t inspire me to go off to India to seek a guru. There was, in fact, so much happening spiritually in the early 1970s in the United States, that I just assumed I could find what I was looking for here.

Several months later, I found the Autobiography of a Yogi, and when I read that book, I knew I had found my spiritual path, and possibly even my guru.

I never kept up with Ram Dass after this initial encounter, and I wasn’t even interested in knowing more about him or his guru. It was nothing negative. I was simply completely absorbed in my own spiritual path. In the summer of 1971, I met Swami Kriyananda and moved to Ananda the following year, where I dove into the spiritual life there and the building of Yogananda’s work through Ananda.

During all my years with Ananda, I never read the Miracle of Love book written by Ram Dass, which is filled with stories about Neem Karoli Baba. Again, there just didn’t seem to be a connection for me spiritually with that path.

And then, several years ago, Nayaswami Jyotish (Ananda’s spiritual director) read a story to us from the Miracle of Love book that I found very inspiring. It made me think, “ I should read that book!” When I did, I found it to be delightful. I especially appreciated what Ram Dass said about the stories in the book. “We can tell you all these miraculous stories about Maharaji, but what we can’t convey to you is the ‘ocean of love’ that we felt in his presence.” To me this statement conveyed a deep spiritual understanding that I found very attractive.

My life unexpectedly connected again with Ram Dass just a few months ago in September of 2019. My husband and I had been visiting Ananda Los Angeles in July and mentioned casually to a number of people that we were going on vacation to Maui in September. Someone there told us that they had a friend who was helping to care for Ram Dass, and asked if we would like to see him while we were there. This was with the thought that we might be able to attend one of the small informal satsangs that occasionally happened with him. She gave us her friend’s phone number, and we connected with him when we arrived on Maui. When we didn’t hear back from him, we just thought, well, perhaps this isn’t something that is trying to happen.

Then, just several days before we were scheduled to leave the island, we finally received a text message. That night there would be a satsang and would we be able to come? We said yes, and the directions to the location were sent to us. The satsang was held at the home of a long-time devotee where Ram Dass was living. We had brought with us a few small gifts for him and were hoping to give these to him in person. When we arrived at the home there were a number of people cleaning up after dinner. Someone offered us chai and then showed us into the adjoining large living room that also served as the satsang area. The altar there had a large picture of Maharaji, reclined with his blanket on and smiling. Off to one side on the wall was also a large batik of Hanuman, with small lights framing it.

There were around 20 people attending the satsang, some of them long-time devotees and others who were very new. One of them told us that Ram Dass hadn’t been feeling well that day, but then shortly after that he was brought into the room in a wheelchair and placed so that he was facing the altar. Obviously this was not going to be a talking satsang but simply one of chanting as a way to spend time with him. Since no one had said anything to us about his condition, we had to assume that he probably wasn’t speaking much at that point, if at all. Pranaba, my husband, went up and greeted him and told him that he was from Ananda. After that, I thought I should do the same, and when I did he took my hand and kissed it. I don’t know if he was able to speak, but he sat upright during the next hour and a half of chanting of the Hanuman Chalise. There was no meditation during that time, which may well have been due to his condition.

Our reason for attending the satsang was not to draw from Ram Dass but to give him energy and support at this time in his life. We gave this on behalf of our gurus and Swami Kriyananda, and we also offered him gratitude for his service to his guru and for all the many thousands of people who had come to him seeking spiritual guidance and blessings. By the time we saw Ram Dass, it was known that he might not live much longer. We both felt that it had been a blessing to be able to connect with him, even though it was entirely on a vibrational level. 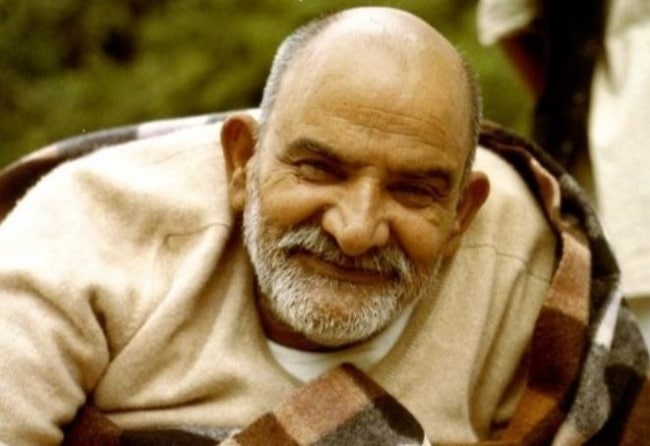 For me, in thinking back about the life of Ram Dass, what has been most inspiring has been his continuing discipleship and service to Neem Karoli Baba over all these years. His example has also been a powerful and sweet message to Americans about the importance of the guru-disciple relationship.

It seems that Maharaji didn’t need to come to America himself because he was able to send his blessings here through Ram Dass. How else to explain the very powerful effect that simple little book Be Here Now had on so many people? And the additional book, Miracle of Love, brought Maharaji’s vibrations even more powerfully to people everywhere. Ram Dass was a true disciple of his guru and spent his entire life serving him very dynamically. What a rare thing this is to find, and how blessed we are to have had the example of his life with us for so many years.

In an interview with Ram Dass that appeared in the New York Times in early September 2019, several weeks before we saw him, he was asked the question, Do you need to finish all your karma before you can be spiritually free? I loved his simple and very truthful answer, “Yup.” Ram Dass did what his guru asked him to do when he sent him back to America, love everyone and speak the truth.

The Guru: How God Guides the Devotee

About the Author
Nayaswami Parvati 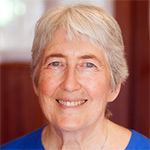 Nayaswami Parvati is one of Ananda’s most widely traveled and experienced ministers. With her husband, Nayaswami Pranaba, she helped to create and direct Ananda centers in Palo Alto, Portland, Seattle, Dallas, and Assisi, Italy. Parvati currently lives at Ananda Village and administers the Janaka Foundation.
Read more