The story and teachings of the great yoga master Paramhansa Yogananda come to life in The Answer, chronicling the true story of an American, James Donald Walters (later Swami Kriyananda).

The film portrays the search for truth that took him from his birthplace in Romania in 1926 to Hollywood, California where he met and was accepted as a disciple of Paramhansa Yogananda, the famous author of Autobiography of a Yogi.

The Answer on DVD

The Answer offers an excellent chance to learn from Yogananda`s teachings.Times of India 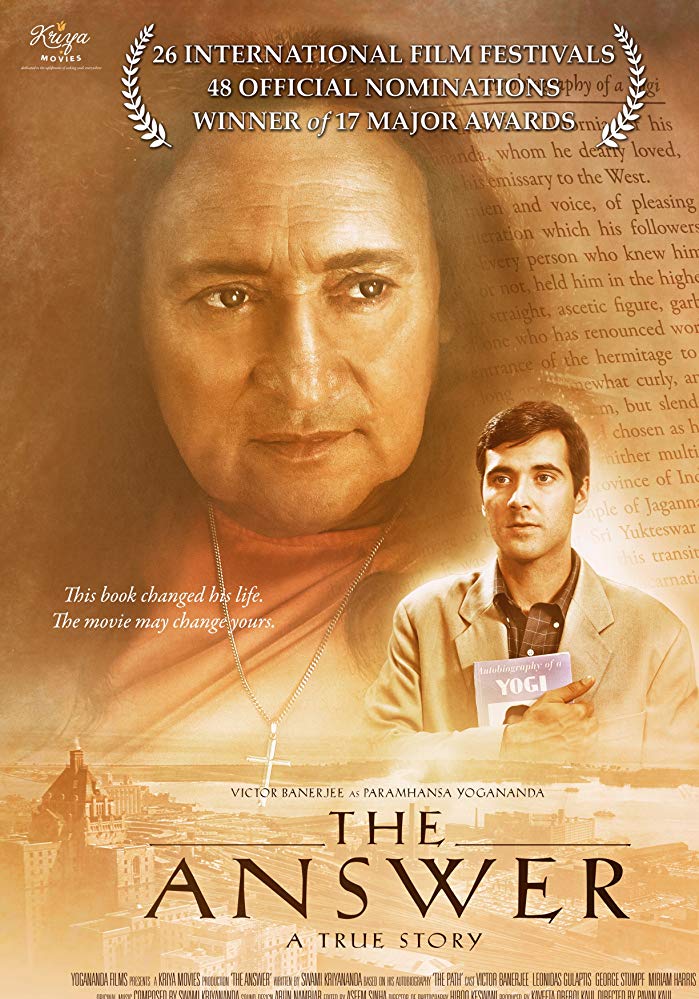 More About the Film

The Answer tells the powerful true story of an American James Donald Walters, his youthful quest for truth which took him from his birthplace in Romania, to Switzerland and England, and finally to the United States, where in 1948 in Hollywood, California he has the extraordinary meeting with Paramhansa Yogananda, the great Indian master and author of Autobiography of a Yogi. Young Donald—later Swami Kriyananda—is immediately accepted as disciple and so his amazing spiritual journey begins.

This film is the saga of his anguished search, of his momentary illuminations and dark nights, of his determination to never give up, and of the winding path that leads him to the presence of his spiritual master. In his quest, we recognize the eternal search of every individual; through his inner battles, the discovery of our own inner strength; in his attunement with the expanded vision of his master, the hope for our own illuminations.

The Answer is an epic motion picture that presents, for the first time on the cinematic screen, one of the most widely-known and revered spiritual masters of our times, Paramhansa Yogananda, through the living testimony and in the own words of his direct disciple Swami Kriyananda who lived with him, and vowed to carry his light to future generations.

A first in the genre of a movie of a true guru-disciple relationship, the message it movie carries, is universal. Paramhansa Yogananda’s Autobiography of a Yogi remains the highest selling autobiography in all languages since 1946. The book was also lately in the news when Steve Jobs revealed that he read it every year and gifted it to attendees at his memorial service.

The film is a period piece, set in the 1920’s through the 1950’s and is filmed across the U.S. and Europe. Featuring an ensemble cast headed by Victor Banerjee (from David Lean’s A Passage to India) who plays the role of Yogananda, the movie is an unforgettable visual and emotional experience.

The Answer is a moving tale of a guru-shishya relationship. Picturized beautifully, it will surely resonate with the followers of Guru Paramhansa Yogananda and Swami Kriyananda.Rajinikanth

“The Answer” – Talk with Jyotish and Devi

“The Answer” – Behind the scenes with Michael Joseph Harris

“The Answer” – Behind the scenes with George Stumph

“The Answer” – Behind the scenes with Deborah Young

“The Answer” – Behind the scenes with Miriam Harris

“The Answer” – Interview with Leonidas Gulaptis

“The Answer” – Behind the scenes with Leonidas Gulaptis

“The Answer” – Interview with Victor Banerjee