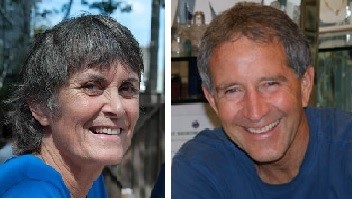 In 1972 I met my husband, Vidura, who was an avid jogger. Soon I too became interested in staying physically fit. We would spend at least an hour every morning running around the local high school track, or jogging along more secluded wooded paths.

The feeling of the wind in my face

Running gave me energy, a sense of well being, and a good feeling about myself. I loved the feeling of the wind in my face and the sheer effort I had to put out to achieve my daily running goal.

Vidura and I kept up our running routines for quite a few years after moving to Ananda Village in the mid-1970s, but my knees began to weaken, and I was forced to give it up. As an alternative, I began walking. Some part of me, however, still yearned for the determination and perseverance that running required.

Over a year ago, we decided to join the new fitness center at Ananda Village. Vidura started going there with his friends three times a week at 7AM, and it wasn’t long before I was joining them, mornings being the best time of day for me to exercise. For all of us it was a happy and productive time. Friendships were easy and relaxed and we both looked forward to those mornings.

Difficulty getting up early

But one morning while meditating, I realized that I didn’t want to leave my meditation to work out. Unlike my husband, I was having difficulty getting up early enough to complete my regular sadhana.

I have always been an early riser. Rising at 5AM or even earlier was never a hardship. But I had been going through some physical challenges that made it almost impossible to meditate upon rising. Often I’d have to wait for over an hour before I would have the wherewithal to meditate with deep concentration.

I realized that, to make it to the fitness center on time, I would either have to leave the deepest part of my sadhana sooner than I wanted, or substitute the fitness center altogether. My thinking at that time was, “Well, it’s better to get some exercise than to stay here thinking of my pain.”

It wasn’t that I didn’t think of God or my guru, Paramhansa Yogananda, while working out at the fitness center. Japa is an extremely important part of my spiritual life. Whether riding in the car, walking to work, playing with my godchildren, or having some quiet time at home, “Om Guru” is my near-constant mantra. But as I experienced more depth of inner communion, japa was just not enough.

The deep yearning of the heart

Then, one morning, the thought came to me, loud and clear: “I must spend my mornings with Master—in my meditation room. Completely. Utterly. With no thought of time schedules!” It was as if Yogananda had whispered in my ear and I could feel His presence, so sweet and full of love.

I hadn’t actually asked God or Yogananda for help in resolving my dilemma. But the guru responds to the deep yearnings of our heart—our unstated but heartfelt aspirations— when we have offered our lives to him in complete surrender. As I was willing to see an alternative, he was able to open my heart and mind to his advice.

There were other times when I had felt Yogananda’s guidance, but my most profound experience of his grace came when I least expected it.  At that time, there was a person in my life who seemingly never passed up a chance to find fault with my sincere efforts to bring the community to new levels of creativity and expansiveness. He appeared unable to see the possibility of finding solutions to our differences.

I struggled with this situation for over ten years and, as hard as I tried to work out our disagreements, nothing succeeded. I finally asked Swami Kriyananda about it. Though sympathetic and supportive, he said, “Durga, the tests only become harder as you become stronger—until you become one with God. How else do we evolve except by being tested in the cold light of day?”

I treasure that counsel from Swamiji, and it has comforted me many times since then. What seemed like such a personal test (“Poor me!”) now became the impersonal love of God. Having gained more detachment, I was finally able to surrender the entire situation to God. I decided that whether or not the other person changed, I would continue to do everything possible to resolve the conflict. But the outcome was completely in God’s hands.

A sudden and lasting freedom

Soon after that I went into seclusion and while there, let go of an idea for a project that was important to me, but in opposition to this other soul. The very next morning, I felt the guru’s grace descend upon me like a warm embrace. After years of torment and frustration, the rift was over. And it has never returned.

What was most amazing, perhaps, was that this other person was also healed. From one day to the next, he became my friend. It was the most powerful example of the guru’s grace I’d ever experienced, and so deeply healing that it had to have come from him. Mere wishful thinking, in my experience, had never brought this type of sudden and lasting freedom.

Important lessons of life come in God’s own timing: no longer did I simply believe my guru would protect and guide me—I knew, from my own experience, that it was so.

Joy in my heart

And so it was again that morning. I felt extremely blessed to have heard what certainly felt like my guru’s thoughts, and my own heartfelt desire, expressed so clearly: “There ARE other times in the day to exercise!” I laughed and felt joy in my heart.

Giving the best hours of my morning to meditation now seems obvious. Yet when one faces challenges on any level, what’s important is not the solution but knowing that the guru’s blessings are so tangibly at hand.

About the Author
durga smallen