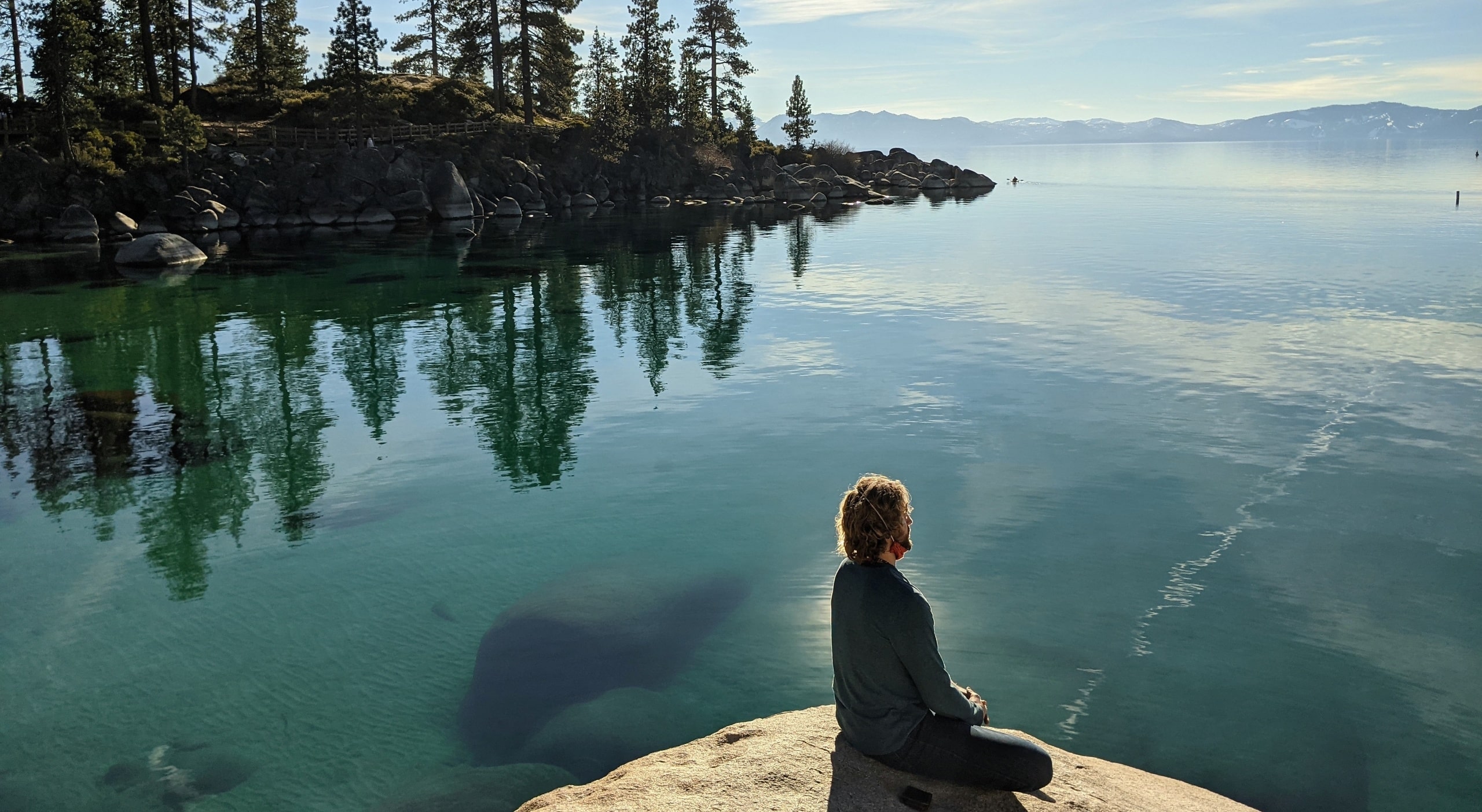 In his famous book, How to Win Friends and Influence People, Dale Carnegie stated that the best way to be thought a fascinating conversationalist is to listen attentively, and with interest. This principle applies also, though of course not in quite the same way, to the practice of prayer.

Most people when they pray talk to God rather than with Him. They don’t take the time to listen, in deep inner silence, for His answer. Prayer, however, to be most deeply meaningful, needs to be a two-way communication, a giving and receiving – like conversation. And while it would be absurd to think in terms of “fascinating” God with our part of the conversation, there are proven ways of making our prayers more effective. Listening is one of them.

How many people ever think of prayer in this way? Usually, they think of it as begging for special favors, as though prayer were a petition submitted before the aweful majesty of an imperial throne. Many, no doubt, question whether the Lord will even single them out for special attention from among the multitudes appealing to Him daily. Perhaps they fear they might be judged presumptuous if they tried to interest Him beyond the actual subject of their petition. Whatever the case, most people talk a lot, like inadequate conversationalists, but seldom think of listening in return.

The difference between the one-way street of normal prayer and actually conversing with God is simply the degree of involvement – on both sides. Of course, there can be no question of trying to “fascinate” Him with our conversation. The Lord has all creation to engage His attention, besides the perfection of love and bliss in which He eternally dwells. One petty life in the great scheme of things cannot particularize His interest to the point of making Him fascinated with it! When we approach Him, however, with deep love, dedication, and trust, we appeal to that cosmic, but at the same time deeply personal, love which He feels for every one of his human children.

We need to involve Him in our lives, in our love for Him. How can we hope to do that, if we merely pray to him? That’s like talking at somebody.

Leaving aside the question of fascination, conversationally, how are we most likely to involve anyone in anything that interests us? It isn’t much different from listening for answers to a question. We involve them best when we include their reality in our own. To awaken concern in them for our needs, we must show an interest in their needs. To get them to participate in our lives, we must participate in their lives. To get them to show love for us, we must love them, first.

All this involvement on our part is, in its own way, a kind of listening. We need, in the same way, to listen to God. The kind of prayer that most often wins a response is one in which the person praying converses with God: calls to Him, while at the same time listening for His silent response in the soul.

And that is, essentially, what is meant by the practice of meditation. Meditation is the act of listening for, and hopefully, in time, listening to, God’s whispered response in the soul.

Why not try that, next time you pray to God? Instead of merely offering up a petition for His consideration, try involving Him in your needs.

Meditation is more than a practice conducted at specific times of the day. It is a habit of mind, a way of life. Try sharing your thoughts and feelings with God all day long. Listen for His guidance, His approval – yes, even His silent laughter within! When you share your life with Him, your meditations also will be much deeper.

When people exclude the practice of meditation from daily prayer, it usually means they aren’t really convinced there is anyone “up there,” listening to them. All too easily, their prayers become a process of simply talking to themselves.

Well, one may ask, does God really listen anyway? You’ll never know, if you don’t give Him a chance to reply! Just as in any conversation, the degree of listening, and the response it awakens, is in direct proportion to the degree of one’s own involvement in what he is saying. Why else is it that the prayers of saints have been, often, so much more effective than those of worldly people? God is no respecter of persons. His response is according to the depth of sincerity in the person praying.

In conversation, people tend to think of listening as something one does after he has said his piece. Personally, however, I’ve found that there is much better communication if one “listens” – that is to say, is sensitive to the other person’s reactions – even during the act of speaking to him. When lecturing, also, even though I don’t expect people to start up a conversation with me from the audience, I’ve found it helps, while lecturing, to “tune into” their needs, to respond to their unspoken reactions, to feel as though I were speaking to each one of them individually.

On the subject of lecturing, I’ve found it helps also to “listen” even before I begin speaking. By that I mean that I meditate and try to tune into what the people in this particular audience need to hear from me.

In the same way, Paramhansa Yogananda (author of Autobiography of a Yogi), who brought teachings and techniques from India to the West, used to say that prayer is most effective when it is offered after some contact with God has been achieved in deep meditation.

Western society generally identifies meditation with the thinking process. We are told to meditate “on” a particular subject. Vaguely, we suppose this means to think in circles around it, hoping for a deeper understanding of it. Only comparatively recently has the teaching come to the West that silence itself is the wellspring from which true understanding arises. In other words, true, and especially spiritual, understanding is not the product of thinking one’s way to it, but of direct inner perception. As Yogananda wrote in his autobiography, “A truth cannot be created, but only perceived.”

Meditation, in this deeper sense, begins with the practice of stilling one’s thoughts and emotions.

Yogananda told the story of a man who was told, as a means of developing spiritual power, to be very careful not to think of monkeys. Of course, the next time he sat to meditate, the first thing he thought about was monkeys! The more he tried not to think of them, the more he probed his memory for every variety of monkey he’d ever read or heard about. Monkeys gradually became an obsession. At last, he returned to his teacher and cried, “Take back this teaching of yours! All it has done is give me monkey-consciousness, not God-consciousness!”

At this, the teacher laughed genially and explained, “I only wanted to help you realize how difficult it is to develop spiritual powers, without first learning to control your own mind.” He then went on to explain to his student the positive aspects of meditation.

So then, the first lesson is: Don’t live in “monkey consciousness”! Instead of trying not to let thoughts and emotions enter your mind, dwell on positive opposite practices that will exert a calming influence on your mind.

The breath is one such influence, when it is used rightly. Not only does the breath reflect one’s mental states: It also greatly affects them.

Take the breath as a reflection of thought and feeling. When a person is agitated, his breathing automatically speeds up. When he falls asleep, his breathing rhythm changes: two counts of exhalation, to one of inhalation. When he is deeply concentrated, he tends to hold his breath. When he is calm, his breathing becomes calm also.

The reverse also is true. By breathing agitatedly, one tends to create an agitated mental or emotional state. A photographer, when taking a photo demanding sensitivity and concentration, learns to hold his breath before clicking the camera shutter.

By calm, deep breathing, similarly, the mind and emotions grow calm also, releasing us from any turmoil that may have been seething within us. This is why the advice is so often given to people who are angry or upset, “First, take a deep breath, and count to ten.”

A good practice when sitting to meditate is to do a few deep breathing exercise. The yoga teachings offer a number of such exercises, some of which I explain in my yoga correspondence course, The Art and Science of Raja Yoga. Less sophisticated than many of these, but quite effective, is this:

Sit upright, and breathe deeply through the nostrils counting 1 to 12. Hold the breath 1 to 12. Then exhale, again to a count of 1 to12. In this particular exercise, don’t hold the breath out, but begin again immediately with another inhalation. Repeat this exercise six to 12 times.

Your posture during meditation is important. We’ve all seen photographs in advertisements of people “meditating” according to the Western notion of relaxation: a person reclining comfortably on a “Lazy Boy” chair, his feet up, his head tilted back on the headrest, his entire posture suggestive of a mood of abandonment. The yogis of India would smile at this passive attempt at relaxation. The fact is, while relaxation is essential to deep meditation, passivity is one of the pitfalls to true relaxation.

To attain this state of consciousness, it is important to sit upright with a straight spine. Traditionally, one does so sitting on the floor with the legs crossed, preferably in one of the yoga positions such as the half or full lotus pose, or Siddhasana (the “Perfect Pose”), but Yogananda said that it is quite all right to sit on a straight-backed chair, with the feet flat on the floor.

Sit away from the back of the chair. Place your hands palms upward at the junction of the thighs and abdomen. Hold the shoulders back to help keep the spine straight. Hold the chin parallel to the ground.

Before the deep breathing exercise, relax the body. First, inhale; tense the whole body till it vibrates; then throw the breath out, and with it all tension. Repeat this process two or three times.

After the deep breathing, concentrate on relaxing more and more deeply – not physically only, but mentally and emotionally. Feel space in the body.

Look upward, concentrating your attention at the central point between the two eyebrows, the seat of spiritual vision. Offer up all thoughts and feelings in deep concentration at this point. Call mentally to God, “Reveal Thyself! Reveal Thyself!”

Gradually, you will feel His peace stealing over you, like a weightless waterfall.