Aum (ॐ) is the vibration by which the Supreme Spirit brings all things into manifestation. It is the Holy Ghost of the Christian Trinity.(1) 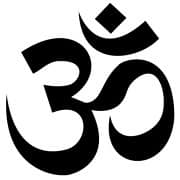 Paramhansa Yogananda has explained that everything — all matter, all energy, all thoughts — exists in Aum.(2)

All major religions recognize this creative vibration, though they call it by different names. For example, the Bible calls it “Amen” (its meaning in Hebrew being sure, faithful) as well as “Holy Ghost.” St. John called it the Word of God (“In the beginning was the Word, and the Word was with God, and the Word was God.… All things were made by him; and without him was not any thing made that was made.” —John 1:1–3). It is the sacred word “Amin” (which means faithful in Arabic) of the Muslims, and Tibetans call it “Hum.”(3)

Learn more about the meaning of Aum and Aum Meditation.

The Three Forces of Creation

All of manifestation is created, preserved in the created state for some time, then eventually destroyed. Aum, therefore, encompasses the three vibratory energies required to create, preserve, and destroy, and each of these energies vibrates at a different frequency.

Traditionally in India, Aum is chanted three times. One reason is to invoke the blessings to the three universes (or the three “bodies” the soul is encased in) — physical, astral, causal. Another is a reminder of these three aspects of Aum.

How to Pronounce Aum

When chanting Aum, the three letters (sounds in Sanskrit) should be pronounced properly for true mantric power:

The “A” in AUM represents the cosmic creative vibration, and should be pronounced short, as in the first “a” in “afar,” rather than long as in “arm.” When this sound is heard in meditation, it has the highest pitch of the three.

“U” (pronounced “oo” as in “moon”) is the cosmic vibration of preservation. It maintains all creation in a state of equilibrium. This sound, when heard in meditation, is pitched somewhat lower than the first.

“M” represents the vibration of cosmic dissolution, which draws all creation back into the Absolute at the end of a universal cycle. The time allotted to cosmic manifestation is known as a Day of Brahma, and spans a period of billions of years. This vibration of the AUM sound, when heard in meditation, is pitched lowest of all, like a deep rumbling.(5)

In addition, these three frequencies should be chanted at different notes:

The notes of the first “AUM” are higher, and should be sung loudly. The second note-sequence is a little lower, and is sung more softly. The third sequence is lowest, and is the softest of the three.

A final point: When chanting AUM, the “M” should be given equal emphasis to the preceding two vowels.(5)

Listen to it here:

Let Every Sound Remind You of AUM

Everything in manifestation vibrates and where there is vibration, there is the sound of Aum.

Even in outward, physical imitations, sounds can be thrilling.
–Swami Kriyananda

Listen intently to the sounds around you: the rushing wind… the roar of a river… the buzzing of a bee… the joyful song of a bird. Commune with each sound you hear. Open yourself completely to it; feel it coming into you. Listen for the sound of AUM within every outer sound. Watch the wind flow through the trees and grassy fields. See in every trembling leaf and sailing cloud — in every movement — the sacred AUM Vibration. Try to perceive AUM in everything you do, see, and hear.

Going Deeper in Aum – Based on the book, “Aum: The Melody of Love,” by Nayaswami Bharat
AUM: The Melody of Love – Seek the sound that never ceases.
AUM: Mantra of Eternity – A CD featuring continuous vocal chanting of “Aum,” set to tamboura accompaniment.