Manas or mon is the perceiving mind, one of the four aspects of consciousness. (1)

Whether a person is identified with ego consciousness of cosmic consciousness, his perceptions of the world are mediated through manas. (2) The other three aspects of mind are buddhi (intelligence), ahankara (ego), and chitta (feeling). (3) 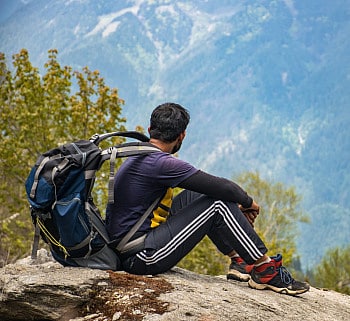 The first aspect of perception, manas shows a person how the world appears through the instruments of the senses. Manas does not qualify or define the images. At the conscious level of manas, the person is not yet involved in the delusions of ego identifications or involvements. (4) Through the senses, impressions enter and are stored by manas in a passive way. The information remains a confused and disconnected mass until it is further processed by other aspects of consciousness. (5)

The consciousness of manas is centered at the top of the head, whereas the other three aspects of mind are centered on progressively lower parts of the human body. (6)

Interiorization of manas is related to the practice of Jyoti Mudra, a technique taught with Kriya Yoga:

(8:12,13) That person reaches the highest goal who closes the gates (openings) of the body, sequesters the (receptive) mind in the heart center, channels all his life force to the brain, and engages steadfastly thereby in the practice of yoga: Such a one, established in AUM—the Holy Word of Brahman—is able to remember Me at the final moment of his emergence from the body.

[Through Jyoti Mudra] the mind (manas, perceptive sense-consciousness) is withdrawn upward from the lowest three chakras in the spine (which are associated with outer consciousness), and is focused in the heart chakra…the fingers are used lightly in such a way as to close the eyes, ears, nostrils, and mouth openings, and to direct their energy inward and upward, focusing it in the spiritual eye…the “inner gateway,” which opens onto infinity. (7)

The Sanskrit words manas (mind) and manu or manuh (man), share the same ancient proto-Indo-European root, *man-, meaning “man.” This root why the English man and its plural men are used in a general sense to refer not to the male gender only but to all human beings who are capable of rational thought, that is, possessing a “mind.” (8)

Manas is also a root of mantra. The concept of the Vedic mantra (the Rig Veda is comprised of over a thousand mantras) is often expressed in English as “hymn,”  but that word does not capture the sacred nature of the Vedas or that the verses of the Vedas were often sung or chanted.  The root words of mantra are manas (“mind”) and tra (“tool”); therefore, mantra literally means “mind tool,” which enabled Treta Yuga man to achieve, temporarily and approximately, the deep states of attunement to Spirit natural to man in Satya Yuga through which Satya Yuga man met his needs. However, mantras chanted by a person of weak and unfocused mind, a person possessing no direct perception of thought, do not bestow anything remotely miraculous on the chanter. The Rig Veda mantras are the finest mental tools, effective only in the hands of the finest mentalists. (9)

The Four Aspects of Mind