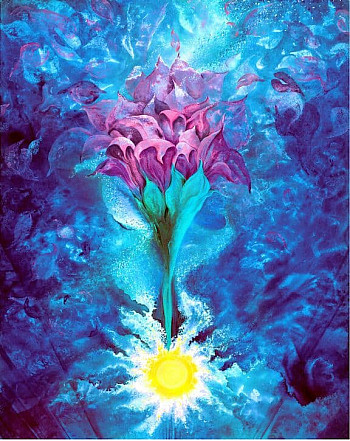 The seventh chakra. The center at which one attains liberation. (1)

Function of the Chakra

The highest chakra, the sahasrara chakra is located in the cranium at the top of the head. (2) It is also known as the crown chakra, the thousand-petaled lotus, or the “seat” or “throne” of God. (3)  At the center, all the rays of the brain radiate outward so that the soul is finally united with God. (2) The rays keep the physical body nourished with energy. (4)

The sahasrara chakra is one of the seven chakras; the lower chakras store and distribute psychological and mental tendencies that can be directed toward the sixth or agya chakra and then ultimately released at the crown chakra. (2) The highest chakra must be approached through the positive pole of the sixth chakra known as the spiritual eye. To approach the crown chakra by any other way is unwise and perhaps dangerous. In other words, one must attain enlightenment before achieving liberation. (1)

Qualities of the Chakra

The sahasrara chakra represents the soul in its aspect of Perfect Being. (5) It is the seat of liberation for enlightened beings. As the goal of yoga practices is samadhi or the superconscious union of the ego with the divine self, the crown chakra is the point at which the soul dissolves ego consciousness. The union may be experienced as merging with a calm inner light. In the light, one can expand one’s consciousness to infinity. The soul lets go of its delusion of being separate from the light and thus becomes the universe. (1)

Although the experience of union with the divine is full of ecstasy, at first the soul may only attain brief moments of liberation. As an analogy, the bird who has long remained imprisoned in its cage may return to its familiar cage even when the door is opened. Finally, however, it realizes that it is free to fly out of the cage; similarly, the soul realizes that its true state is in its full liberation as spirit. (1)

One can experience samadhi through meditation. The only barrier withholding one from the experience of liberation is simply the thought that one is not yet liberated. However, the great masters including Jesus Christ, Krishna, Paramhansa Yogananda, and others have shown that final emancipation comes when the seeds of karma have been destroyed. When the soul believes that it is free to the last layers of its consciousness, then it is fully free. (1)

By prolonged meditation on the spiritual eye, the soul experiences first the sixth chakra’s circular field of blue light ringed with gold and then passes through the subtle passage at the seventh chakra. (1) When the enlightened master finally ceases all action in the world, his consciousness becomes centered in the sahasrara chakra, and he merges with the infinite spirit in samadhi. (5)