Literally means “wheel”. Refers to centers of energy in the astral spine. 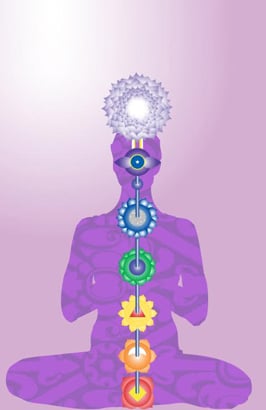 As this energy enters the body, it travels down the astral spine and is dispersed into the body from six centers, or chakras, located along the astral spine. This subtle spine can be visualized as a tube of light running centrally through the body from the base of the spine to the brain. The central nervous system is the physical expression of the astral spine and, interestingly, has major centers near the areas of each of the chakras, where groups of nerves branch out from the spinal cord.

There is a vast and somewhat complex yogic science dealing with the chakras. Each chakra is associated with a quality of consciousness; an element; a planet; two astrological signs (one as the energy ascends and one as it descends); a sound; a spiritual quality; and so forth. As energy passes through or rests in any chakra, the mind is influenced by the qualities of that center. In the deepest states of meditation, all prana is withdrawn from the body into the chakras and then directed to the spiritual eye, enabling enlightenment to take place. (1)

Here is a list of each chakra in order of its location in the spine: