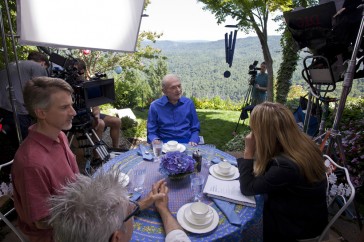 There is a tangible presence of God on the set here, as I step into my role for the film, Cities of Light. I had no idea what to expect from this process, and what a process it is! A few nights ago I couldn’t sleep, as I knew my life was heading into a complete unknown.

The film itself is a docudrama, with a fictitious journalist, Juliet, assigned to come and see if communities like Ananda are really a solution to the challenges we face in the world today. I play myself, and am Juliet’s first introduction to Ananda, and serve as her “tour guide” throughout her stay. She meets Swami Kriyananda twice, as well as Jyotish and Devi and others from Ananda in her investigation into why Ananda is so successful.

The day began at 7:00 AM, as the whole crew and cast (numbering around 40 at least) converged onto Crystal Hermitage. I headed into makeup and wardrobe, and then began shooting a scene where Juliet and I walk down the path to the Crystal Hermitage Chapel. 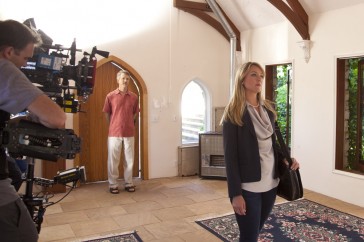 Now the interesting thing about this film is that we are not going strictly by script – my answers to Juliet’s questions are coming from my own experience, how I would say them. Freeing in one way, but challenging in another, as I have a hard time remembering exactly what I said from take to take, or trusting the flow of my own dialogue.

Next we moved down to Swami’s lower garden, where Juliet has her first interview. I’m in the scene, but don’t speak, which was quite a relief. Swami did fabulously, and they got much more than what they were looking for. Elisabeth Rohm, the actress playing Juliet, is very very appreciative to be in the film, is very resonant to Swami Kriyananda’s vibration, and is quickly becoming a great friend.

After lunch we filmed her entrance into Crystal Hermitage, with limited words from me (phew!), and an interior scene in the Chapel. Right now we are waiting for them to finish setting up the “master shot” for the interview with Swami, which is the wide angle shots (the mornings were closeups). Swamiji is completely natural, and is a wonderful model for me, very informal and unworried about little things that creep into natural speech. Time for me to let go of my Virgo nature of trying to say just the right thing, just the right way, with just the right inflection. My dear friend Asha was very helpful in reminding me that if I sound like I’m just reciting a prerecorded speech, that it will be laughable indeed!

So, I go into my spine, feel the inspiration for the scene, visualize our blocking, and feel the vibration of what is to be conveyed. An interesting process, and one that enables me to best tune into the flow of Divine grace that is, for me, tangibly present.

Everyone is happy with the flow of the shoot, which is not without challenges, and seem to be happy to be in such an idyllic setting. I just saw some of the shots on an iPad, and the footage shows Crystal Hermitage in a most amazing light, with sweeping, panoramic views.

We’re all extremely interested to see the flow of the film takes for itself, and as Ted, the director said, it’s like grabbing onto a rolling freight train and holding on for two weeks!