Glorious weekend! Around 400 Ananda Village residents and guests gathered to honor and celebrate Swami Kriyananda’s birthday. Saturday morning class at the amphitheater was his first public appearance since he arrived at the village last Wednesday. Though his body shows his age, his spirit is ageless. He gave a very inspiring talk on his search for God and Truth at a very young age, on how he met Master and how his life was changed instantly. He shared many details about those early years that I hadn’t heard before. This wonderful talk will be available in audio and video format at the Ananda website very soon.

In the early evening, he had an open house at the Crystal Hermitage. There again, he talked for almost an hour and a half on many different subjects, including his various projects in India. 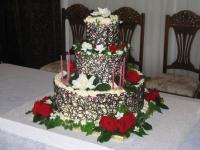 Then the delicious birthday cake arrived. A behind-the-scenes note about the birthday cake: I was assigned to drive the cake in our car from the Mair residence to the Hermitage. This was big responsibility as it took Nancy and other volunteers over three days to prepare the cake. I had the A/C turned to max to keep the car cool for the cake, while Kerry (Nancy’s husband) strategically positioned himself in the cargo area right next to the cake to protect it from any damage that a pothole or a turn might cause. What is usually a five minute drive took us about 15 minutes. Rest assured, the cake arrived at the hermitage all in one piece.

Around 7pm, when the program was finished and when everyone thought Swamiji would be very tired and would go back to his apartment, he instead decided to stay and personally greet and bless every single guest. Was he not tired? He must have been. But, as he mentioned several times in his talk, he no longer identifies himself with the body, he just does whatever God and Guru tells him to do at that moment. At the end of the evening he told that his birthday wish for everyone is that they all become “jivan mukta’s” (freed while living) in this lifetime.

On top of this very busy Saturday, he also gave the Sunday Service and had lunch at the Expanding Light. During Sunday Service, he talked about his new upcoming book, “The Revelations of Christ“. He said this and “The Essence of the Bhagavad Gita” were his two favorite books he has ever written. He said that he read the Revelations over and over, he was amazed how easily it read and how logical the flow was from chapter to chapter. Of course, he attributed this to the grace of God that flowed through him to enable him to write this book. The official launch of this book will take place on Saturday July 21, 2007 at 8pm at the Wadsworth Theater in Los Angeles.

Though Swamiji’s body is very weak, his voice and his words are stronger than ever. Throughout the weekend, he gave so much energy to everyone present. He encouraged everyone to love God, which is the only true love there is.