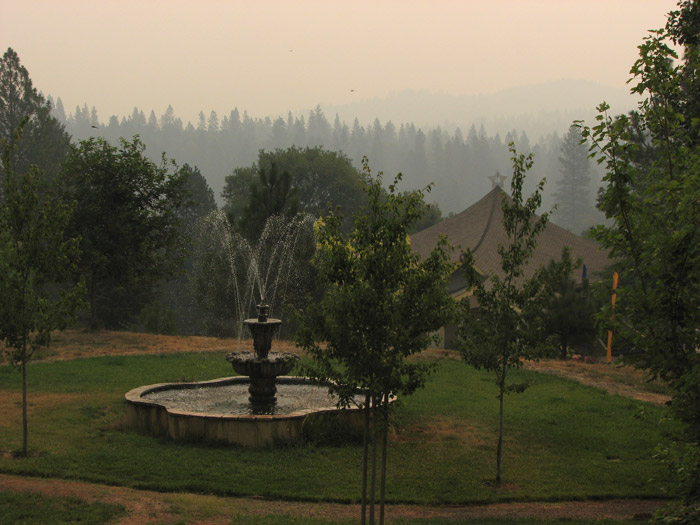 I was sitting outside, feeling sorry for myself.

“Nabha, you’ve got to drive away the smoke.”

Huh? I looked up.

“Nabha, you’ve got to drive away the smoke!”

A friend at Ananda Village was saying this to me. With fires all over Northern California, even though none had come close to us, there had been smoke in the air for a week. This was an annoyance to some and had caused health problems for others.

“I can’t run with all the smoke in the air.”

I commiserated with him.

“So, you should drive away the smoke.”

I tentatively said that I’d try, still not sure what kind of smoke we were talking about.

“C’mon, you’re from Seattle, you should know how to control the weather.”

This last bit I found very funny. It’s always cloudy in Seattle. One year, it rained each day for over 90 days in a row. And I’ve been dealing with moods like this for years. Hey, I should know how to control the weather!

The conversation finished as my friend went inside. Whether intended or not, its unusual double-meaning inspired me to look at it more closely. Applying his words to my own inner climate, I came to feel that:

My attitude changed. With a brisk walk and with God’s blessings, the mood lifted within the hour.

I occasionally have problems with moods. Long ago, I would have called them “depression,” but within a year after I started meditating, they began to pass quickly and be relatively easy to handle – which is what the word “mood” implies.

Previously, something I always felt during a mood or depression was that it was here to stay. I felt weighted down by the thought that “this is the way things really are.” But thoughts like this are based on a delusion.

For even if my moods last for weeks, or longer – which they have – what is that, in an entire lifetime? They have to go eventually. When that “eventually” comes, it will be now.

Another conversation I had on the subject of moods was with Nitai, one of the monks at Ananda’s monastery in America. When we spoke, I was having a difficult time.

A mood makes everything seem worse; in it, all events, which Paramhansa Yogananda said are in themselves neutral, take on a gloomy haze. In a mood, my thoughts continually forecast: “high chance of rain with possible lightning strikes.” During these times, I find it helps to follow a simple rule: “don’t trust the mind.”

All mental states, like the weather, are transitory. Nitai pointed out that a mood is like a cloudy sky. As clouds always pass, in time, so must any depression, mood, or “low.”

One thing I find helpful during tough times like these is the company of people with positive attitudes. At Ananda, people tend not to feed patterns of negative energy. Instead, they support positive activity, like a person’s meditation practice.

Another time, Nitai shared that though meditation is more difficult during a depression or mood, were I to stop meditating, all of my life would become much more difficult.

When the mood lifted, I saw he was right. Meditation only seems less rewarding during these times, but it isn’t, by any means.

For the mood I mentioned in the beginning of this post, meeting it by changing my attitude and through exercise helped me rise to a high level of energy. The mood was a blessing, disguised. 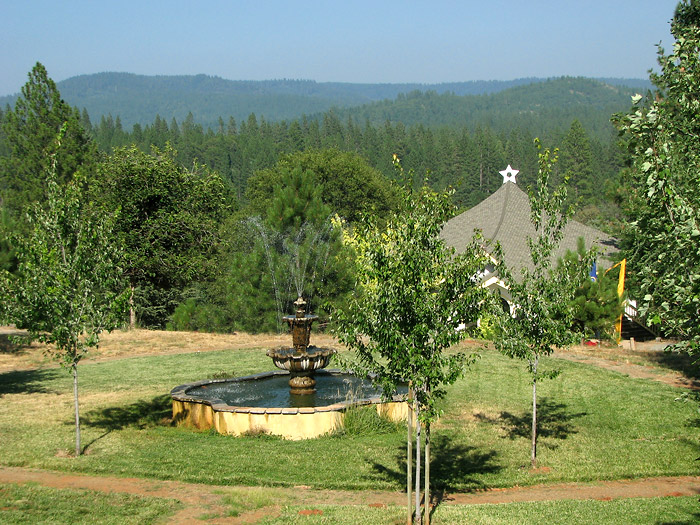 It isn’t the first time that a mood has become a source of joy. Inevitably I find that through perseverance, aspiration, and God’s grace, the dark skies of sadness burn away and disappear in a puff of smoke.