Padre Pio decided to build a hospital in a desperately poor region of southern Italy. Thousands of the wealthy and the poor responded to the saint’s request for donations. 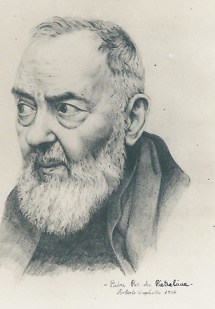 But the gift that touched Padre Pio the deepest was offered by a widow of extremely limited means.

The old lady reached into her purse and offered Padre Pio a fifty-lire note – worth about three US cents. Knowing how poor she was, he smiled and replied that she needn’t give anything. When she again tried to hand him the note, he wouldn’t accept it.

Once again she insisted, saying that she was able to make small sacrifices – if she needed fuel for her lamp, she could get it from a neighbor. Again, Padre Pio insisted that she didn’t need to give.

Finally, the woman said that she understood – the amount she had offered was too small. Padre Pio began to weep. He told the woman to give him the donation immediately.

He didn’t give the note to the hospital administrators but kept it as a reminder of the woman’s devoted spirit. He would often pull the note out of his pocket and weep at the thought of the poor woman’s love.

“Pray, pray to the Lord with me, because the whole world needs prayer. And every day, when your heart especially feels the loneliness of life, pray. Pray to the Lord, because even God needs our prayers.” – Padre Pio of Pietrelcina