In 1963, soon after Swami Atmananda’s death, I felt a strong desire to go to Tibet, there to meet great saints. A swami at the Sivananda ashram in Rishikesh had also wanted to go, and agreed to accompany me. So in 1963 we left on another trek, this time past the holy city of Almora just north of Naini Tal. We were never able to reach Tibet owing to China’s invasion of that country. No foreigners were allowed across the Tibetan border.

In Almora, however, we met a great saint, a British man who Anandamoyee Ma told me later was a very advanced swami. His name was Krishna Prem, which means “Beloved of Krishna,” and he certainly was that. For he was a great devotee, and whenever speaking, spoke only of Krishna. I asked him if he ever got lonely, living so far away from other people. “Oh no!” he said. “I am always talking to Krishna. He is dearer to me than my own self.” He was like butter: soft and lovable, yet with great strength of character-like Krishna himself! He had a large statue of his Beloved, and we meditated there with him for a while. He then fed us lunch. We stayed only a couple of hours, but it was worth the entire trip. Perhaps that was Master’s wish for us anyway, and not Tibet. Krishna Prem passed away in 1985. I feel blessed for the good fortune of having met him.

Dayama came back to India a few more times: once in 1964 and again in 1969. In Dakshineswar, Dubey chastised me repeatedly for creating what he called “a wall of obstruction” in the work. (The rest of us knew all along that what he wanted was total control, and that it was in that ambition that he was feeling “obstructed.”) He couldn’t argue with me in public, though, so he simply smiled, knowing that he would “win” in the end. He refused to listen when I explained to him that Master felt it was important to keep the traditional customs in Indian ashrams, and told him he was hurting people with his ignorance and haughtiness. Daya said to me, “Why not follow him a little bit?” But what he was doing was not dharmic. If you were my superior, and said to me, “The sun rises in the West,” would dharma tell me to agree with you?

Well, Dubey finally got everything he’d wanted. All the original ashram monks left including, in 1966, myself. I said to him, “Now you are happy! Because of you, Kriyananda is gone, Atmananda is gone, Paramananda is gone, Gyanananda is gone, I am gone. We are all gone. And now the work is being led by a worldly person like yourself. I thank Master for taking me out at this time, for you will be the ruin of it. I am ashamed at your total lack of respect for what Master wanted this work to be.”

Swami Gyanananda and Paramananda and I have remained good friends over the years. Gyanananda I see often. At one time a devotee gave him a statue of Lord Krishna. He worshiped it every day. In 1959, when he left Calcutta and YSS for Haridwar, he asked me to keep this Krishna murti for daily puja worship, which I perform twice daily. Since then the murti has been with me. Sometimes a devotee asks to borrow him for a week or two, and I am happy to oblige. I try to go every year in June to stay with Gyanananda for a month in his lovely little hut in the hills of Mussoorie, near Dehra Dun.

Over the years Kriyananda and I have become very good friends. I have been gratified to see all that he has been able to accomplish for his guru without the “obstruction” of institutional affiliation. He has created flourishing communities, both in America and in Italy: spiritual villages, rather than monasteries, but for all that ashrams, where many hundreds of people live dedicated lives of service and meditation. In these ashrams there are thriving schools for children, and activities from which thousands of people receive teaching and inspiration. Here, possibly, lies a model for the kind of “institution” that could serve India in the future: not a Western, super-organized set-up as Dubey favored, but free-flowing places, filled with divine love.

In 1986, the first group of pilgrims from these Ananda ashrams in America (Ananda means “divine joy”) came to Calcutta and visited Tulsi Bose’s home. Since then the group has come eight times. How beautiful it has been to see so many devotees from America enjoy, with deepest appreciation, the places where Master lived, walked, and taught in India. I explained to them the relics in our meditation room: the stately trident of Lahiri Mahasaya’s, which he gave to Sri Yukteswar, from whom it came to Tulsi Bose and has been with Hassi and me ever since; Sri Yukteswar’s conch; Master’s spoon, plate, knife, and cane; Anandamoyee Ma’s shawl; the Krishna murti that Gyanananda gave to me in honor of our deep friendship in God; and many, many others.

The Ananda devotees meditated in our home for long periods of time, donated money for the remodeling of the rooms, and told me they felt as though this was their home, too.

Over the years we have become very good friends, and it was with great joy that we received an invitation in 1993 to come to Ananda Village for the 100th Anniversary of Yogananda’s birth. Hassi and I, and Hare Krishna Ghosh and his wife Anjali all went joyfully to America on this Ananda pilgrimage, where we were invited also to speak. Vidura and Durga met us in New York City and accompanied us to California. In New York we visited, among other places, Carnegie Hall where Master, in April, 1926, had lectured and sung to a packed auditorium of three thousand people. 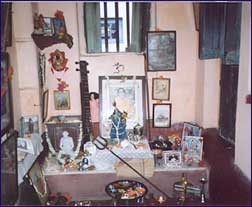 In Carnegie Hall Master had that whole crowd, most of them completely new to his teachings, enthusiastically singing with him for an hour and a half the Indian chant, “O God Beautiful!” Many miracles of healing occurred that evening, including one of a man who burst angrily into Master’s interview room afterward, flung a revolver onto his desk, and cried, “I ought to shoot you for what you’ve done to me! I can’t go back to my life of crime anymore!” So saying, he left, leaving the revolver on the desk as a donation-a rather strange “thank you present” for his spiritual healing!

At Ananda we stayed with Brian and Lisa Powers, who took care of all our needs. We also went to Lake Tahoe and visited Los Angeles, where I fulfilled a dream of mine: visiting the Biltmore Hotel where, on 7th March, 1952, Master left his body. 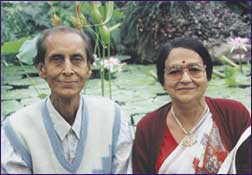 We were especially blessed, in Los Angeles, to visit Master’s ashrams. At Mt. Washington, SRF’s headquarters (“Mother Center” it is called), we again met with Dayama, Ananda Mata, Sailasuta, Daya’s brother Richard Wright (who visited India with Master in 1935), and others. We had the blessing of meditating in Master’s bedroom, visited his sitting room where he used to receive guests, and meditated on the grounds where, Master told his disciples, “I have meditated in every place on this property.”

We also visited the other Ananda ashrams, or “colonies,” as Master called them. I had never thought I would be able to visit these holy places. I thank Master and Kriyananda for making it possible to fulfill my greatest wish, and Vidura and Durga for taking us everywhere. I deeply pray to Divine Mother for the health of these good friends, and for their ever-deepening devotion to God and Guru. I deeply pray also for Kriyananda and for his continued good health and ability to serve Master in unceasing activity and devotion. I feel that Master is behind him in all he does, and that he will be so always.

To finish our trip, we visited my old friend Paramananda in Naples, Florida, and spent ten days in his home. Paramananda is a devotee of Ma Kali, and has a large statue of Her in his meditation room. He feels particularly close to Her, as his Divine Mother. The room is filled with Her presence. May the Divine Mother deeply bless him. 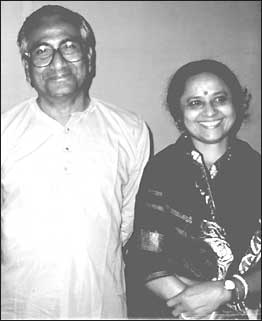 Hassi and I in Calcutta during an Ananda pilgrimage in 1987