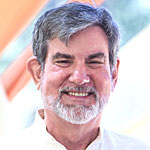 Dr. Van Houten serves as Medical Director of the Sierra Family Medical Clinic and is a longtime resident of Ananda Village. This article was originally published in Ananda’s Clarity Magazine.

In the early 1980’s, I attended a revolutionary conference for scientists who specialize in the brain and nervous system called, “The Ever-Changing Brain.” New information was being discovered about the nature of our brain and central nervous system that corroborated strongly with what the ancient spiritual traditions of yoga said about the brain’s ability to change. According to the old scientific model in the West the brain didn’t change much during a person’s lifetime. The brain developed through childhood and adolescence and somewhere around age twenty, it was thought, our brain cells began to die off without being replaced. After that, it was a race to see how many brain cells you would lose before you died! It was pretty grim.

At this conference, we were presented with hard scientific data to show that the brain isn’t a static, “fixed-in-concrete” organ. In some of the very early experiments, researchers found that not only does the brain change in response to how it’s being used but responds vigorously by changing both its structure and its function. We’ve known for centuries that if you were not in the habit of exercising and you began lifting weights or performing some other form of vigorous physical activity, your muscles will begin to increase in size and will become stronger. Likewise, it was found, with the brain that it changes its structure and function depending on how it’s used.

For example, suppose you decided one day that you wanted to become a world-class musician, but you had never previously studied music. How is your brain going to help you respond to your new musical interest? It does so in several ways. In that part of the brain concerned with music, brain cells begin to increase in number. Secondly, the interconnections between the cells in that part of the brain also increase dramatically. Thirdly, brain cells located near the musically related area are “recruited” to help with musical abilities. Imagine a computer automatically increasing its (RAM) random access memory. A computer can’t do this unless you buy a new RAM memory chip. But the brain, because of its ability to change, makes the necessary changes automatically!

Two important areas of the brain of particular interest to yogis are the frontal lobes in the area of the forehead right above the eyebrows, and the limbic system deep inside the brain. How those two areas function influence greatly who you are: your behavior, your thinking, and what you’re going to do with your life. We can see on brain scans that when brain function in these areas is abnormal, a person’s behavior tends also to be abnormal.

The limbic system is a primitive portion of the brain, present in both humans and lower animals, associated with survival instincts and basic primitive emotions such as rage, fear or aggression. An animal knowing how to nurture its young or defend its territory, are limbic system functions. The human brain also has a number of these built-in instinctual functions. Brain scans show that when people get very frightened, upset, or angry, the cells in the limbic system start firing wildly. Fear of heights, for example, is related to over activity of the limbic system where a person becomes extremely anxious and out of control on a ladder or a high ledge.

The frontal lobes, located in the forehead, are the most anterior portion of the brain. The most important portion of this area is called the pre-frontal lobes. They are the most evolved part of the human brain but found in a very limited way in just a few of the animals such as dolphins. Human happiness and ability to enjoy life is very much dependent on the function of our pre-frontal lobes. This area also seems to be associated with many of our best qualities such as idealism, joy, our ability to concentrate, creativity, and our ability to think abstractly. For example, the saying, “a stitch in time saves nine.” People with normal pre-frontal lobes understand what that means: you save time and energy by doing a thing preventively. But a person who does not have normally functioning frontal lobes can’t abstract the underlying meaning and might answer, “I don’t know… maybe I should fix my pants?” He wouldn’t be able to make the mental leap to abstract from the phrase something more general.

As a primary care physician, I deal with peoples’ everyday problems and often see patients who are clinically depressed. They lack energy or maybe they’re anxious, or perhaps they’re not enjoying life. They lack concentration, don’t sleep well, or they have difficulty completing a task. They tend to be obsessed by negative thoughts. A brain scan would likely show their pre-frontal lobes to be very quiet while the primitive part of their brain, the limbic system, overactive.

One of my depressed patients described to me what it feels like to have his frontal lobes asleep and limbic system overactive. He said, “I feel as if I’m sitting in my car and the gear shift is in neutral, so I’m not going anywhere; but I have my foot all the way down on the gas, and the engine is going so fast it’s about to explode.” This description seemed to capture for me what it feels like to have one’s limbic system revved up “with no place to go” while the frontal lobes are asleep. It’s not surprising that depressed people often feel miserable and are disabled.

With this understanding of the brain structure, it raises the basic question, “What can we do to improve ourselves and become a better person?” The brain is very responsive and will change if we point it in the right direction. If we choose to be violent, our brain will respond by changing in ways that make us more violent and coarse. On the other hand, if we choose a life of compassion and kindness, our brains will respond by helping us to manifest those qualities.

I think it’s great that we have this built-in safety net of a limbic system inside us. If we’re not ready to take control of our lives, we have this automatic instinctual system to keep us out of trouble. But as soon as we decide to step up to the plate and be “super-human” or “super-conscious” we can do that, too. There are very specific ways of doing this.

In the early 1970’s, as a young researcher out of college, I was involved in one of the first scientific studies done on meditation. We were trying to answer the basic question: is meditation different from sleep? At that time the prevailing idea was that when people sat to meditate, they simply went to sleep! Part of our research was to study physiological changes in the body and brain during meditation to see whether this was true or not. This was my introduction to the topic of meditation.

In carefully controlled experiments, we had people meditate inside a plexiglass box, about the size of a phone booth, hooked up to many different instruments. In this way, we could monitor oxygen consumption, brain wave patterns, heart function, and blood chemistry. Not surprisingly, we found that meditation is very different from sleep! We discovered that peoples’ heart rate went down, their blood pressure dropped, oxygen consumption fell by as much as 50%, and their blood chemicals changed. In addition, their brain wave patterns also changed to one significantly different from sleep. We found that many stress hormones fell to lower than usual levels during meditation as people developed an anti-stress or relaxation response and gained the ability to enter a hypo-metabolic, or deeply relaxed state, at will.

Another thing that has been demonstrated is that long-time meditators have better control over bodily functions that are usually considered involuntary. In a biofeedback experiment, test subjects were asked to raise the temperature of their left index finger by ten degrees. Long-time meditators learned to do that, on average, quite a bit faster than non-meditators. The process of meditation tends to give people more control not only over their brain functions and physiology, but also over their “janitorial” and involuntary systems as well. It doesn’t mean that such a person “doesn’t react.” It means simply that they have much more control over their reaction!

One of the complexities of studying meditation is that there are so many different meditation techniques, and all research tends to be lumped together. The good news is that most meditation techniques have similar effects on the body. There are subtle differences and over the next thirty years we will probably learn what they are. The meditation techniques we practice at Ananda and the techniques of most spiritual paths focus on energizing the pre-frontal lobes of the brain, either by concentrating the point between the eyebrows or by doing a technique that promotes this even if one is not necessarily concentrating there directly. Paramhansa Yogananda actually said that when you practice the techniques of Kriya Yoga, you are energizing the frontal part of the brain.

Intensity is Everything — How Work Helps Our Meditation Practice

Meditation: The Art of Being Centered