What was the real reason behind SRF’s filing the lawsuit against Ananda?

The battle, then, though superficially over legal technicalities involving copyrights and trademarks, was actually about religious freedom. Could a single organization claim ownership and total control over Yogananda’s teachings, his name, and even the man himself (who, they declared in their court filings, had written Autobiography of a Yogi as a “work for hire” under the direct supervision of his own organization)? Or was Yogananda a teacher who belonged to the whole world, access to whose works and legacy was available to all?

The twelve-year legal battle that ensued was a David vs. Goliath contest. Ananda had always run on a shoestring; we were represented by a sole practitioner without even a full-time secretary. SRF, a far wealthier organization, hired as counsel one of the largest law firms in the country. Their strategy at every stage was calculated to drive up the legal costs to such an extent, in the words of the presiding judge, as to “put Ananda out of business.” It was, for Ananda, a fight for its life. We had no choice, however, but to fight on, as our very discipleship—our right to serve our Guru by sharing his teachings—was precisely the point at issue.

What was the court’s verdict?

Throughout those twelve years, we prayed that Yogananda’s will be done. In the end, and after many appeals on SRF’s part, when against all odds victory was ours, we took it as his grace. The court ruled that:

How did the court ruling affect Ananda and Yogananda’s mission?

In summary, the court rulings validated Ananda’s right, and that of its members, to act as any true disciple must: We were now free to share Paramhansa Yogananda’s teachings with the world. In winning this decision, Ananda secured this same right for all other organizations and individuals as well, now and forever in future. And the court’s findings have been of help also to others facing similar challenges, for this case has proved to be an important one, frequently cited in other legal proceedings on account of the many new issues it addressed. 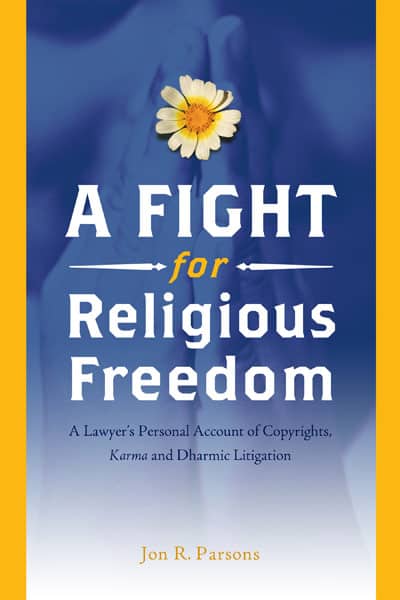 Through their commitment during those twelve long years, it should be added, our members grew much stronger in their discipleship. Strikingly, given the extreme challenges we faced, Ananda’s work grew dramatically during those very years: in its number of members, in its geographic reach, and especially in spiritual depth.

This is a much-abbreviated recounting of events that included many fascinating twists and turns, with far-reaching consequences. For the full story, we highly recommend the account written by Jon Parsons, our lawyer in the case. He has a delightful sense of humor, and it’s a great read.

A Fight for Religious Freedom: A Lawyer’s Personal Account of Copyrights, Karma and Dharmic Litigation, by Jon R. Parsons

Go On Alone: A Struggle Between Personal Integrity and Group Conformity, by Swami Kriyananda (read online for free)

Swami Kriyananda: As We Have Known Him, by Asha Nayaswami (aka Asha Praver)

Faith is My Armor: The Life of Swami Kriyananda, by Devi Novak

Return to the FAQs
Ananda Course in Meditation — Starts August 04