For the past two years, I have had the blessing of living with Swami Kriyananda and many Ananda friends in India, our spiritual homeland. My husband Tim and I moved to the Ananda ashram in New Delhi in October 2006.

This past November we moved to Pune with a few other “pioneering members,” taking up residence in several apartments of one of the new apartment buildings on the edge of town. We were joined a month later by Swami Kriyananda and others, making our total number here twenty.

Swami Kriyananda feels that Pune will be a receptive place to the idea of spiritual community. The population of Pune and the surrounding urban area is just over five million, with approximately half of the population between fifteen and thirty years of age. There is a great amount of young, vibrant energy. 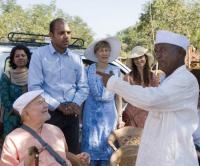 To that end, Ananda decided to purchase twenty-five acres of rural land near the village of Watunde, an hour drive outside Pune. The team in charge of developing the land travels there daily, often working 10-12 hour days, overseeing developing of the land, drawing up plans, and meeting with architects, builders and land agents. Our goal is to create a community.

After arriving in the city, Swami Kriyananda suggested that in addition to creating a rural community, we also focus on building an urban community in the city of Pune in order to reach a broader population. At this time, the project is in the beginning stages, but we have already had several meetings to get the process started. We are trying to define the spiritual needs of the local population, and find the best location.

In the meantime, Swami Kriyananda finished a new edit of his autobiography, The Path, now titled The New Path. He has begun recording the audio version of the book. After that he is planning to record video talks based on his book The Essence of the Bhagavad Gita.

In addition to working toward building communities, we give free inspirational talks four evenings a week, open to the public. One of those, by Swami Kriyananda, takes place in the community room of our apartment complex. His talks are full of enthusiasm. (A link to the one from January 17 is posted at the end of this article).

One of the aspects of Ananda’s work in India includes providing solar/wind hybrid systems to small villages. A recent touching event was when the solar team installed a solar/wind hybrid system on the land where our rural community will be built. The caretaker and his family live in a simple four room building. One cannot properly call it a “house,” as there are no doorways between the four rooms and one must access other rooms by walking outside to a common porch area. There is no running water or electricity. Meals are cooked over an open fire pit in the front of the building. A couple of weeks ago the solar team went to work to remedy this situation. A week later they finished installing a system which allowed the family to have light in their home. This happened on the very evening the rest of the village was shrouded in darkness due to the scheduled weekly power outage! To witness such a basic convenience provided for people who may otherwise live their entire lives without, is a joy.

Living in Pune has been a very different experience for me personally than living in New Delhi. The language (Marathi, not Hindi, is the main language), the weather, and … the noise. 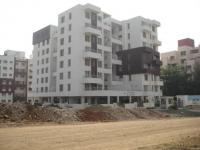 We live in an area of major new construction. New apartment buildings are cropping up all around us. Hammering, drilling and shouting are the order of the day. And at some point every night, the dogs decide to go into their street corner songs. My husband Tim thinks they sound pretty awful, but I think they’re not so bad… I just wish they would confine their vocal exercises to the daytime hours! Alas, they are apparently enamoured with the sounds of their own barking and often have vocal contests with each other throughout the night.

Another difference from New Delhi is the absence of the pedal-driven rickshaws, overabundance of cows roaming the streets and chilly winter days. Instead, there are vast amounts of auto-rickshaws, scooters, motorcycles, and goats. In the middle of January we only need a light blanket for sleeping.

There are other differences as well. For instance, Pune has more schools, colleges and universities than any other city in the world! It is known as the “Oxford of the East,” due to having over one hundred educational institutions, including nine universities. Students come from all over the world to study at the University of Pune.

Pune is also referred to as “The Detroit of India” owing to the many manufacturing companies, particularly automobile giants, having their headquarters  within the city’s metropolitan area.

Pune is rich with historical and spiritual sites. There is no shortage of museums, temples and shrines in this city which has existed since 937 A.D.

All the noise, bustle, educational institutions, temples and landmarks are, however, merely the backdrop to our lives here. Ultimately, what we are here for is to share Yogananda’s work in whatever way we can. LOTS of energy is needed to start a community and offer spiritual teachings to all who wish to know.

So many of us here work behind the scenes in ways that may not be directly connected with developing the land, teaching classes or providing solar electricity, but each one’s seva (selfless service) provides support to the whole in ways beyond measure.

There are the selfless souls who opened the doors of their apartment to make their living area a temple where we have group meditations every morning. Others provide the audio and video recordings of Swami Kriyananda’s talks, and others send out reports and photographs of daily life here, and the announcements of coming events. Decorating the altars, singing in the choir, playing devotional chants for our guests… all of these divine services provide the support that helps keep our energy upward and onward. 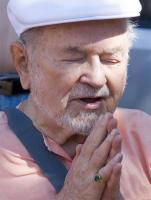 And then there are all our friends from around India and the world who send us prayers and love every day, that we may have the energy to keep up with Swami Kriyananda who, despite his almost 83 years, can still run circles around all of us with his energy and enthusiasm!

About the Author
Lisa Clark 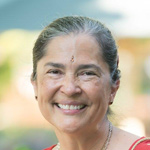