On August 31st I was honored to be a part of something wonderful and new at Ananda: the start of a dynamic youth movement.

Over 20 young people from Ananda centers around the world hosted a lunch-and-concert fundraiser at Ananda’s Institute of Alternative Living and Meditation Retreat.

It marked the first time that a large group of Ananda’s youth had come together to accomplish something significant. It was a tangible demonstration of the younger generation’s dedication and sincerity, and it meant something special for the future of Ananda.

Rather than tell you about the event with words only, let me share some of the photographs that were taken. 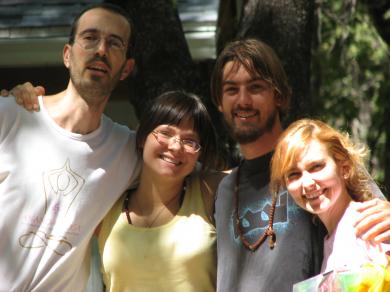 A lot of people had to come together to make this event happen, but the one driving force more than any other was Narayani (on the right, above).

She oversaw the event as a whole, and was personally involved in the meal planning and decoration. She attracted many others to be involved in the project by the sheer power of enthusiasm. 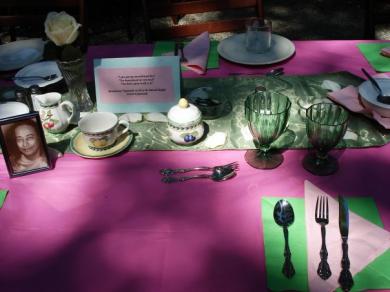 This is where Swami Kriyananda sat. I was one of the waiters for his table, and spoke with him at several points during the lunch. He was very gracious; among other things, he asked me to tell Narayani that the meal was “superb” and “wonderful.”

I could tell that he enjoyed the meal just by seeing how he was eating. And yet later, I was told he said to someone, “I’m feeling so much bliss that I can barely eat.”

When we were cleaning up, I found his half-finished dessert! It was true prasad, true holy food. 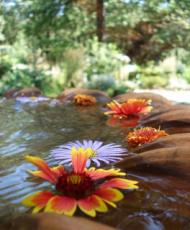 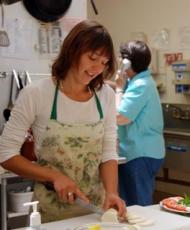 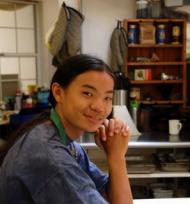 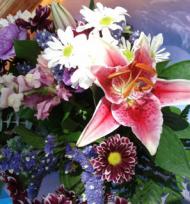 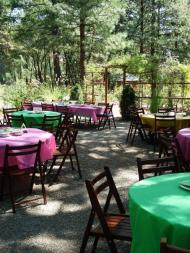 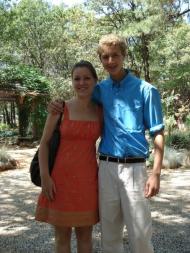 Weeks of planning, preparation, and rehearsal went into the event. I was involved in organizing the concert. The fact that we have many talented young singers and musicians at Ananda Village made this easier! Some of them are pictured above.

Melody (also a singer) is one of the deeply committed young people who have been with Ananda for a long time. She said about this event:

“[It] helped me to finally connect with all the other young people, because it was so deep. Everything we were doing was for Master and Swamiji. …

“I could feel such a deep connection with everyone, with nature, the gardens, and Master as we prepared the beautiful setting. That time of service all Saturday and Sunday was almost a deeper experience than the lunch and concert.

“All I can say is JOY! I felt so much joy, and it lasted for about 2 days afterwards. A very high experience for me, which I’ll never forget.”

The event was on a Sunday. By Friday, tables and chairs were being moved into place. On Saturday, a large group of us congregated at the Meditation Retreat and served for as long as we could, getting things ready.

A few people hardly slept that night as we worked on into Sunday morning and up to 1:00 pm, when the lunch began. 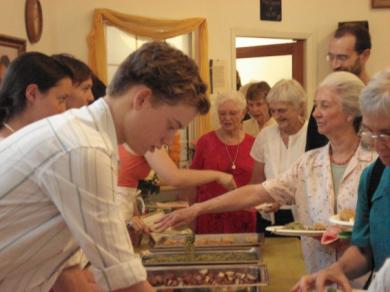 The lunch went smoothly. It was an interesting thing: things were happening everywhere, everyone seemed busy almost constantly, and yet everyone seemed pretty calm, and whenever I needed help, someone willing was close-at-hand.

Unaccountably, and perhaps partly because I was busy serving, I also felt deeply calm.

After the lunch, everyone walked to the “Temple of Leaves” to listen to the concert. 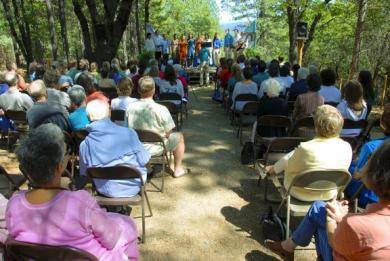 I’ve sung in many concerts at Ananda, including huge oratorios with 70 and 100 singers, Christmas concerts, spring concerts, concerts where Swami Kriyananda was present, and more — but this concert was one of the most inspiring I’ve ever performed in.

Ramesha, an experienced and talented musician, was our conductor. He said that:

“… while you guys were singing I felt something major happen.

“I don’t know how to put it in words, but at some point in the performance I felt a strong wave of joy, sweetness, and purity flowing from all of you, and we were all perfectly connected on a deep level, while God was using your voices to express Himself, showering the audience with His grace.

“I feel blessed to be part of this sacred energy.” 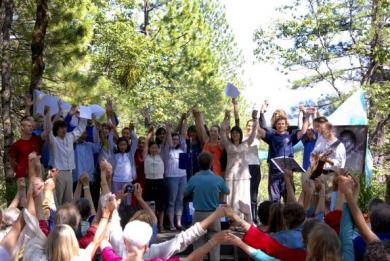 After singing for around 45 minutes, we invited all the youth in the audience up on the stage to sing one of Ananda’s theme songs, “Many Hands Make a Miracle.”

There was a pause, and someone said, “define youth!” (We’re all ageless in our souls, after all!) Everyone laughed.

In case you’re wondering, too, our working definition for youth is “anyone under 40.” It’s a good definition because it doesn’t exclude anyone who wants to be a part of what we’re doing. Currently, our ages range from high-school-age through early 30s. 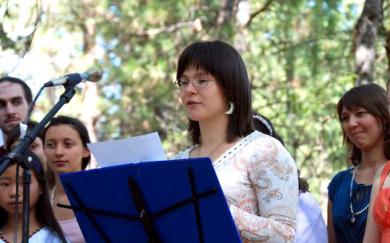 After the concert ended, Ania (above) read a letter she had written to Swami Kriyananda on behalf of all of us.

“You have started this community right here on this sacred ground 40 years ago. By inspiring many souls with your vision and quest for Self-realization, you and they, (some of whom are here today) have worked harmoniously to build the first self-sustaining, world-brotherhood communities devoted to God and Self-realization in this age as models for the world.

“And at this time, the next cycle of Master’s vision is unfolding with the coming of many young disciples who are dedicated to carrying on His mission into the challenging but promising future ahead.

“You have showered us with inspiration from the example and the fruits of your discipleship on which we will draw day after day and year after year ever more strongly as we refine our intuitive receptivity.

“We look up to You, Swamiji, as children do to mighty oaks, and aspire and strive to grow as strong in God you have, and to shelter all who come with wisdom and peace, and to freely share fruits of love and joy.

“Thank You from all our hearts for all that you and Master have given and will continue to emanate to us into eternity.”

A number of people, including myself, were moved to tears. Ania’s letter expressed our own feelings so clearly! Devi Novak, one of Ananda’s spiritual directors, later wrote, “I was moved to my core when I saw the spirit of the next Ananda generation taking the baton to carry on Master’s mission that Swamiji has manifested in to this world.” 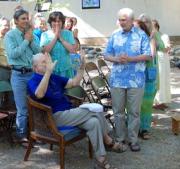 Swami Kriyananda then lifted his hands in blessing. He said something that may have been meant for all those, everywhere, who will carry Paramhansa Yogananda’s mission into the future.

“I feel the masters’ blessings go to you, and empower you, and fill you with bliss.

“Thank you very much, and more than that, I thank Master for you, and I thank you for what you will do for Master. I know that with your blessings, you will carry on his mission into the new age. ”

“May God fill you with blessings.”

Swami Kriyananda has often said that Ananda is the most important thing happening today. Its 40-year-old working model is the best proof we have that a better world is possible.

As my mind returned to these thoughts over and over again this last week, I felt deeply grateful to be even a small part of something so great. 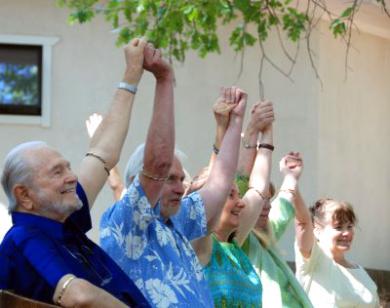