Why would I feel in my heart God’s call to go on pilgrimage to the Holy Land and Assisi? My youngest child was only three years old! It seemed unthinkable to go, yet I felt prayerfully drawn. As I was soon to discover, sometimes the process of praying to know whether to embark on a pilgrimage becomes a spiritual journey in itself.

Growing up, I always had a strong devotion to Jesus and Mary. At the tender age of three, a traumatic event had led to recurring nightmares. One night, waking from the nightmare, I knelt on my bed and made my first prayer-demand: “Mary! Please go tell Jesus I don’t want any more scary dreams!” I was protected from nightmares for the rest of my childhood.

My devotional life deepened when my husband and I moved to Ananda Village in 1978 and embraced a meditative lifestyle. In 1985, Swami Kriyananda, the founder of Ananda Village, led a group of Ananda devotees on a pilgrimage to the Holy Land and Assisi. I would have loved to join the group, but Peter, then our youngest child, was only a year old. Leaving him behind for almost four weeks was out of the question. However, when the same pilgrimage was offered in 1987, my husband, Tim, wanted us to go. Tim believed that Peter, now age three, would be fine, but didn’t want to push me into such an important decision.

When Tim and I attended a meeting about the upcoming pilgrimage, I sat in the rear of the room, torn between two forms of devotion, maternal and divine. As I listened, tears streamed down my face. This trip called to my heart. Much as I yearned for a time of dedicated spiritual focus, Peter’s tender years caused me loving concern. Krishnabai, our eight-year-old daughter, I knew would have a wonderful time staying at her best friend’s house.

One day while walking alone in the woods at Ananda Village, I poured out my heart to Divine Mother: “I want to go! But I believe it would be much better to wait until Peter is five years old, instead of only three!”

Divine Mother’s silent voice resounded within me: “I agree with you. But five isn’t going to happen.” Her prophecy proved true. Political turbulence in the Middle East caused Ananda to suspend its Holy Land tours. Though I did not know more than thirty years would pass before Ananda offered this pilgrimage again, I did understand that, for me, it was now or never.

A message from Divine Mother

One evening, while Tim was upstairs doing prayers and bedtime stories with our children, I was downstairs washing the dinner dishes and still tussling with Divine Mother about this pilgrimage. My hands submerged in the warm, soapy water, I heard Her guiding inner voice: “You have to go, or else you have to get cancer, for there is no other way to teach you your lessons.” Her message stunned me to my core. I knew that even if Peter suffered while I was away on the pilgrimage, that suffering did not compare to what my family would feel, losing me altogether to cancer. Inwardly I replied, “Okay! I’ll go!”

As soon as Tim came downstairs, I told him about my inner guidance. A young family living a simple life, we did not know how we would pay for this pilgrimage, but we knew we were going.

Soon after, we learned that we would receive an inheritance from Tim’s uncle Kenny. It provided enough to cover the cost of the pilgrimage, and then some. We could also now afford to add a spacious master bedroom to the two-bedroom cottage Tim had built for us when Krishnabai was a baby. In the days and weeks leading up to the trip, I prayed continuously to Divine Mother to watch over our children while we were gone.

A deeply calm premonition of death

Swami Kriyananda had recently written a spiritual ceremony called A Festival of Light. Initially he led the ceremony every weeknight in the Crystal Hermitage chapel, which was always filled to capacity. Even when other Ananda ministers began leading the ceremony, Kriyananda would sometimes put out the word early in the day that he would lead the Festival that evening. Once or twice a week, I played guitar and led the singing. Two days before embarking on our pilgrimage, I was scheduled to play guitar again. On this day Kriyananda did not announce until the last minute that he would lead the Festival. Because only a few people knew in time, the chapel was less than half full.

Early in the ceremony, Kriyananda read aloud from his book Rays of the Same Light. Partway through the reading, he put down the book and looked out at all of us. “What makes you so sure that when you go to bed at night you will wake up in the morning? There are no guarantees. Live like a genius. A genius puts all of his energy into whatever he’s doing. Most people just stick a toe in to test the waters, but they keep the rest of their energy in reserve. Don’t live like that. Give your all to Divine Mother. Throw yourself completely into the search for God. . . .”

Kriyananda spoke for several minutes in this manner. His words lifted me into a state of bliss. Distinctly the thought came, “I will be very surprised if I am still alive in one month.” I felt deeply calm at this premonition of death. I had no fear whatsoever. I then revised my prayer of concern for my children: “Divine Mother, I realize now that You are the Eternal Mother of my children, and I am only their foster mother here on earth! I give them back into Your hands. Watch over them, bless and guide them, now and always!”

When Kriyananda resumed reading aloud from Rays of the Same Light, followed by the Festival of Light, I turned within. This gave me a few minutes to absorb what had just happened. I longed to behold the faces of my fellow devotees in the chapel, all of whom I assumed had shared my blissful experience.

When it was finally time to lead the singing, I was able to turn around and face the congregation. What I saw surprised me. Although everyone looked peaceful, as I had often seen people appear in Kriyananda’s presence, only one person looked blissfully transformed. Her name was Cathy Kielhorn, a single mother of two boys. I felt happy that she had been blessed in this same way, and that we had shared something special.

A time of deep blessings

Coming as this experience with Kriyananda did only two days before the pilgrimage, I was naturally concerned about my premonition of death. Would something happen to me on the trip? Some friends comforted me by saying that sometimes when people feel impending death, it is really that the ego, or a big chunk of it, is about to die. The goal of the spiritual path is to transcend the ego. I wondered if my pilgrimage would bring a profound transcendence of the ego.

The pilgrimage was, indeed, beautiful, with divine blessings at every stop. One especially deep experience occurred in the courtyard outside the Church of the Nativity in Bethlehem. I felt infused with divine love even as we waited to enter the church. The Divine Beloved filled my heart. I was in love, except that my Beloved was within me and all around me. There was no separation.

Other deep blessings came in both the Church of the Holy Sepulcher and in the Golgotha chapel. Deep, silent, heart-wrenching tears filled my being as I wept in empathy with the women at the foot of the cross. This moment, I believe, was connected to the inner guidance I had received—go on the pilgrimage or suffer cancer.

Years later, vivid past-life memories revealed the scope of my involvement in painful events in the Holy Land, so painful that I wept for three hours. Although these memories are too sacred to reveal here, I can say that sometimes centuries-old debris needs to be cleared away before one can embrace God’s everlasting love.

Many other sacred and blissful memories from that trip fill my heart. Divine joy opens the soul to whatever gifts God and Guru have to offer us. The Holy Land and Assisi pilgrimage was a profound chapter in my life, and the blessings continue to this day.

Afterward: We are all connected

After the pilgrimage, Tim and I were happy to be reunited with our children. Almost immediately Peter developed a rash over his entire body, a condition I intuited was the result of emotions awakened by our absence. I also felt (accurately, as it turned out) that his condition would clear up in ten days.

My pre-pilgrimage premonition of death came again to my awareness during the pilgrimage: A moment came when my life was in serious danger, but I was protected. Then, two days after our return to Ananda Village, Cathy Kielhorn suddenly and tragically died of toxic shock syndrome. Though my heart ached for her and for her two young sons, I was comforted in remembering the blessing from Swami Kriyananda that she and I had shared in the Crystal Hermitage chapel almost a month earlier. I believe Swami Kriyananda made his last-minute decision to do the Festival of Light because of a nudge from Divine Mother. We are all connected.

Perhaps my prayer of offering my children back into Divine Mother’s hands helped Cathy and her children as well. Cathy’s death came just at the time given in my premonition of my own death. Perhaps my prayer for my own children somehow, by Divine Mother’s grace, expanded to include Cathy’s boys as well. Although some things must remain mysteries, I feel that through Kriyananda’s words that day in the chapel, Divine Mother helped two young mothers. 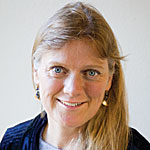