A number of years ago, I had the opportunity to visit the home of Nayaswami Jyotish and Nayaswami Devi for the first time.  I happened to notice a large picture on their meditation altar of Swami Kriyananda with a garland around it. Having been brought up, spiritually speaking, to feel that our lineage contained strictly Jesus, Babaji, Lahiri Mahasaya, Sri Yukteswar, and Paramhansa Yogananda, I was curious about the meaning of this. I ventured to ask them, “Is Swami Kriyananda your guru?  I am a little confused about his role in our line of gurus.” 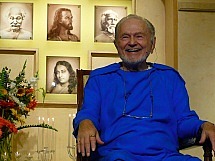 Jyotish pointed to the table we were sitting at and said, “Imagine that there are some ice cubes sitting on this table. One of them is Yogananda, another is Sri Yukteswar, another Babaji, and the last ice cube is Swami. When the sun comes out and melts these ice cubes, what will happen? They will melt together into the water from which they are all made. Even so, the great saints incarnate in apparently separate forms with different roles to play. But they, just like those ice cubes, will eventually melt back into their most natural state and merge as one again. Swami always encouraged us to see Yogananda as the guru, and never himself. But the blessings that have come from living close to Swami for some fifty years would certainly equate to the blessing one receives from living with a true guru. So, to tell you the truth, I don’t know.”

A beautiful affirmation of Yogananda’s comes to mind in telling this story: “I am no longer the little wave of consciousness thinking itself separated from the sea of cosmic consciousness. I am the ocean of spirit that has become the wave of human life.” From this we can begin to understand that all souls are made of the same divine substance. We are all just waves, or ice cubes of spirit struggling to melt back into the sea. In our own apparent separation, we tend also to separate Kriyananda, Yogananda, Christ, and any other master; but the truth is that they have melted back into the one ocean of God, and the purpose of our lives is to do the same. The only question is: How do we achieve this? 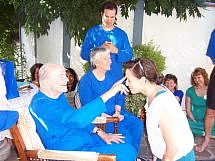 Every great scripture tells us that it is the blessing of a true guru that will ultimately bring us back to that state of everlasting unity. This blessing can also come from those who are in tune with that guru. Motivated by this knowledge, I always wanted to meet with Swamiji and receive Yogananda’s blessing through his touch. I had seen him at lectures and around the village, but still had not been given this opportunity. Finally one summer I heard that he was going to bless everyone present at a gathering. Eagerly I awaited my turn, but when it was over I found myself wondering why I had not felt anything.

About two weeks later, I had a couple of experiences with him that showed me how to truly receive. We had been practicing all summer long for the performance of Swami’s wonderful play, The Peace Treaty. The day arrived and we were all in costume, rehearsing our lines. A few minutes before show time, Swami’s car pulled up. Narayani helped him out of it and began to walk him to his seat. Swami stopped for a moment and looked down a small hill to where the actors were practicing. Our eyes met. I felt the most wonderful blessing coming from him, passing through me with an almost unbearable joy. This moment felt like a glimpse of eternity that stays with me to this day.

Swami then came through Master’s Market where I worked. He was visiting the various areas around the village and I happened to be preparing lunch that day. As I was very busy, I had barely any time to sit in his presence. But as soon as I saw him, he shook my hand and I felt a thrill of divine love coming from him and through me. I imagine that this must be what he had felt from Yogananda. 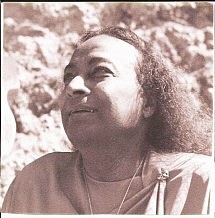 I began to see that the times when I was serving without a thought for my self was when his blessings could truly reach me. And those times when I selfishly sought his energy, without opening myself as a channel for it to others, I was closed off.

These experiences showed me that if we desire to become one with God, we must act as the saints do, offering ourselves as channels of love and service to all. God doesn’t come to us, He comes through us. This is the essence of Yogananda’s statement, “The channel is blessed by that which flows through it.” In other words, the way to receive is to give!

Swami often told us that he felt Yogananda was the avatar for the new age of Dwapara Yuga. One could say that in light of the life he has lived, Swami Kriyananda could be called the disciple of Dwapara Yuga. With his every act, he exemplified how to be a receptive disciple. With his every act, he offered himself as a channel for his guru. As a result, he was liberated.

We too, if we continue to act as an instrument of God’s Love, will melt into that Infinite Sea. Then we can say, like the Nayaswami Vow, “I no longer exist as a separate entity, but offer my life unreservedly into Thy great ocean of awareness.” This is the path. Not just my path, not just yours, but the path that every soul is on!