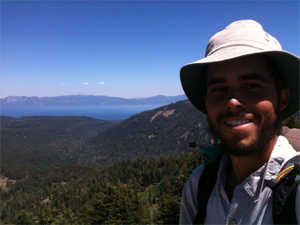 It was last August when we watched our dear friend Andy Lyon make his transition into the world beyond this one. I have seen death in this life only from a distance in the way of great grandparents, family friends, bygone pets, and jaded celebrities. But what a powerful and enlightening experience it can be when the soul is one who we’ve walked with, talked with and meditated with.

I had met Andy some years before in the Living with Spirit summer camp. He and I shared a love for wholesome nutrition and the beneficial effect it had on our spiritual practices. At some point, he decided to move into Inspiration House, where I also lived at the time. Inspiration House, at that point, was a place where young people could come live in the village and experience community, learning various skills through an apprentice-style program. Andy started working in the kitchen with me at Master’s Market. I would take turns cooking the market lunch with him and would often see him at ceremonies, Sunday services, and the other get-togethers held at the village. Whenever we would have a chance to connect, it was always very meaningful.

He never told me about the life-threatening illness he’d been battling for years so when I heard the news that Andy might not be with us very much longer, it was very confusing. I had grown accustomed to seeing him regularly, and just like anyone in their early twenties, I figured that we’d share a long life together.

It was in July of 2013 that I asked a friend about him. I knew he had just finished hiking the massive Pacific Crest Trail (a length of which is 2,663 miles long) and I was inquiring about his next step, hoping that he would come back to live at Ananda Village again.

“So how is Andy? Where does he plan to go next? Are we gonna see him at the village soon?”

As she replied, her eyes began to water and I felt a cold shock that she may actually be about to tell me that he had passed on.

“He’s decided on hospice. His family is taking care of him and I don’t think we’ll be seeing him again.”

My thoughts began to whirl about, “Wait, wait, wait! How could this be? My friend Andy, who’s younger than I am? The amazing person who just hiked across the continent…is now on hospice care?!”

The first thing I did in response to this news was contact Mary Kretzman, the minister at Ananda in charge of the healing prayer groups. She immediately began to get the word out to all the prayer groups both in the community and across the world.

As we all know, amazing things happen when a group comes together in prayer on the behalf of a soul in need. Andy was quickly at the top of the prayer list in my meditation room and in many others I am sure.

A week or two passed with little word on the condition of our friend. I was feeling a strong desire to go and see him at his mother’s house in Southern California but my schedule did not permit this. As I prayed about it, I began to feel that as long as I continued to send him loving energy, we’d stay connected.

Then, before I knew it, he was at Ananda Village with his family in the Crystal Hermitage Guest House. How’d he get there? Even in his frail state, he requested his family to drive him on the 11 hour trip to Ananda, where he planned to make his transition from the physical to spiritual.

When we received the word that our friend had come and that he may pass at any moment, all those close to him arranged to share an evening of chanting, fellowship, and meditation. His mother ordered pizza from Master’s Market for everyone and we were all set for Friday. The morning came and a friend and I were harvesting summer tomatoes on the farm. As we delivered them to the market, someone told us that Andy had left his body early that morning.

So unreal are those first moments when the news arrives that they have gone. On the spiritual level all is well, all is beautiful, all are safe and watched over by God. But on the physical plane, Andy is gone forever…just a memory now. That hurts. And even though we know intellectually that anyone and everyone who has visited this temporal world, must eventually sever all ties and depart, still there is a sense of sadness and loss.

Ultimately this brought about an incredibly sweet energy between each of us who he’d left behind. That sense of mutual struggle, of bittersweet tears in the realization that even though our friend was in the arms of the Infinite and we were overjoyed for his soul, still we would not be able to laugh with him and behold his humble smile of purity in this life again.

His mother still encouraged us to come chant and meditate with his body that evening. It was about eight of us younger folk with Jyotish and Devi who gathered to see his form one last time. What an experience it is to meditate with a body that just hours ago had encased a dear friend. The only way I could describe it is utter stillness. We could see that his soul could no longer use that vehicle and chose to move on. Even though Andy was told we were coming that evening, I feel that he chose to leave before we arrived for a very deep reason. For one, he did not want our presence to rouse in him any sense of personal attachment. He was ready to go and had selected his time and place. Also, he wanted our last memory of him to be one of joy and not of sorrow. Had we seen him suffering in those last hours, which were surely painful, we might not have had such a positive experience.

Looking at each of my friends while we chanted, I felt a strong determination to be kind and loving to each of them always for we never know when this chapter of life will end. When that time comes, all that will matter are those moments when we came together in the divine consciousness of love and friendship. And any time we judged each other, any time we chose to argue or took for granted their friendship, for these things we would feel profoundly regretful.

When our meditation had ended, I heard Devi quietly say to Andy’s mother, “His soul feels very joyful and free.”

I believe the healing prayers that were being sent to Andy by so many during the last month of his life helped him to make the journey back to Ananda, his favorite place in the world, in order to be assisted in his transition by the angelic presence that is so alive here.

Though there were tears shed that day, and though there was deep grieving, I must say it was one of the best days of my life because a light was turned on in each one of us. It brought us all closer to God and gave us a glimpse of the precious nature of His fragile creation.

May the kindness that was manifest in this great soul’s life as Andy Lyon inspire and remind us always that the purpose of life is to unite with God’s Love.

Here is a link to a newspaper article that tells a more in-depth story of his extraordinary life: http://www.lagunabeachindy.com/andrew-lyon/