Many of the Ananda India staff and devotees from Gurgaon – Delhi – Noida (also known as India National Capitol Region – NCR) went to Pune the weekend of March 27–29 for a retreat on our new community land.

It was hard to believe just how much things have progressed in just one year! The last time most of us had been there was the Bhoomi Poojan – land blessing in February 2009. Dinner in the new dining area of the Retreat

Ananda India monks headed up the extremely complicated guest transportation schedule between Pune airport and train station, Ananda apartments and hotel in the city, and the community land, which is about one hour outside of Pune.

They led sadhanas (spiritual practices) in the grass-roofed temple, and a kirtan (devotional chanting) on Saturday evening. They took us on land tours which included new houses, kutirs (cabins), monastery, roads, and garden.

They, and many helpers, prepared three delicious meals a day for about sixty or seventy people. Dharmini from Ananda Gurgaon led our choir practice and singing. Dharmadas, Jaya, Sundeep and Amol (leaders of Ananda India) did a presentation on next phases for building, and for creating Ananda businesses to support the community.

As you can probably imagine, it was one of those wonderful, joy-filled Ananda weekends when everyone feels a part of a much bigger plan and can feel Yogananda’s grace throughout. Walking from morning meditation to breakfast past the bath house. Small kutirs (cabins) are further up the hill. Bramhacharis Jemal and Ditya (in yellow) lead the walking tour of the land. Inside Swamiji’s living room. It was designed to hold many people! Kirtan (devotional chanting) under the stars. Swami Kriyananda is answering questions from the audience.

We had the very good fortune to spend considerable time with Swami Kriyananda. We watched him recording two 2-hour sessions of TV programs based on the Bhagavad Gita commentaries, to be broadcast later throughout India and Asia.

Brian McSweeney, who is visiting from Ananda Palo Alto in California, was behind the camera, and there was a gorgeous Himalayan-themed backdrop behind Swamiji. On Sunday morning, instead of filming more programs, Swamiji lovingly and patiently answered the questions of many devotees who were squeezed into his living room.

Click below to listen to the audio recording of the Q&A, 105 minutes, 48 MB

We know Swamiji was tired from filming, but he seemed in top form and looked wonderful, as you will see in the photos. It was a deeply inspiring, precious time it was for all of us.

About the Author
Taylor Daya 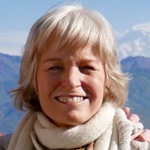