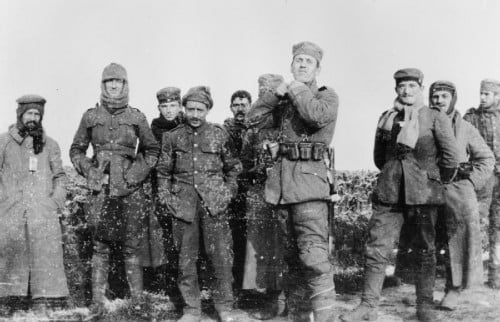 “A soldier I saw weeping
Beside a dying friend.
My officers had said
I must hate him till the end.
But seeing his grief, I knew we were brothers.”

December, 1914: Five months into the 52 months of the first world war, more than a million young men had died. The Western Front stretched from the Franco-Swiss border to the Belgian coast. On each side were trenches and barbed wire; in between, in No Man’s Land, were the bodies of sheep and soldiers, shell craters, and mud as deep as four feet. Almost every day brought more rain, flooding the trenches, soaking clothing and blankets—a grey misery that stretched on and on. The soldiers crouched in their trenches, trying to keep warm and dry. Any head that rose out of the trenches drew sniper fire.

These were courageous young men; they had volunteered with patriotic fervor and enthusiasm, and with high hopes that their (as each side saw it) righteous victory would come by Christmas. Five months of mutual slaughter had left the front line all but unchanged. Many of the wounded had died within hearing of their fellows, helpless to drag them to safety. They died where they fell, and they stayed where they fell, sometimes for months on end.

So close were the opposing trenches that German voices carried to the English side and English voices to the German. The same hardship was borne by both sides, the same grief for fallen comrades. One English soldier commented wryly, “We’re all in the same muck.” And yet, even in the grinding misery of trench warfare, these young men felt something in the air—a hopefulness, a sense of expectancy, growing stronger as Christmas drew nearer.

Christmas eve, 1914: Peering cautiously at the German front, the English soldiers of one sector saw three great bonfires blazing behind the German line. Such illumination was unthinkably dangerous in wartime. Then appeared hundreds of lights all along the German bulwarks—makeshift Christmas trees, illuminated by candles. And from the trenches came hundreds of German voices singing “Stille Nacht, Heilige Nacht.” Rallying themselves, the English opposite let off fireworks, put up banners saying “Happy Christmas” and responded to the German caroling with “The First Noel.” Enthusiastically, joyfully, each side applauded the efforts of the other. Late into the night, they traded carols, coming together—two opposing armies—to sing in unison, in Latin, “Adeste Fideles”—“Oh, Come All Ye Faithful.”

Divine Mother had specially blessed this day, and the next, with what one soldier called a “Christmas-card Christmas Eve:” an end to the rain, colder temperatures that froze the endless mud into a firm surface, a crystalline white rime covering everything, dead sheep and men, blasted trees, destroyed buildings, softening outlines, giving even the horrors of war a gentle, sparkling surface. Across No Man’s Land voices called out lustily, “A Happy Christmas to you Englishmen”—and in reply, “Same to you, Fritz, but dinna o’ereat yourself wi’ they sausages.”

Christmas Day, 1914: From the German trenches, one NCO stood up, climbed over the parapets, and walked calmly toward the English side. God’s light had descended into his soul. In his hand, held aloft, he carried a tiny Christmas tree, surrounded by lit candles. On his own, spontaneously, this noble soul reached out to (as one soldier put it) “our friends the enemy.” This act of courageous friendship was mirrored, in a hundred unique ways, up and down the 500-mile-front—the individual awakening to the spirit of brotherhood of thousands of young men, each a unique spark in this great conflagration of divine friendship.

Out of the trenches they came, bearing gifts to those they had been ordered to hate—cigars, tinned meats, puddings, even helmets and scarves. Impromptu football matches sprang up—a chaotic and joyful melee of kickball amid the bomb craters. In the pauses, addresses were exchanged, and promises to meet again in better times.

For the Indian soldiers, the Christmas lights along the parapets transported them in imagination to their beloved Diwali celebration in Mother India—the Festival of Lights so sacred in the Hindu year, the triumphant return to Ayodhya of Rama and Sita from their fourteen-year exile.

In the French sector, Capitaine Rimbault spoke to his men as “a brother speaking to his brothers, wishing them a good and gallant Christmas.” On an altar assembled from the wreckage of a nearby village, the French soldiers celebrated mass there in their trenches. Into the night they sang carols of peace and gentleness. Throughout the ceremony, the opposing army, Bavarian Catholics, with profound respect, refrained altogether from shooting. “For an instant,” Capitaine Rimbault wrote, “the God of good will was once more master of this corner of the earth.”

All along the front informal truces came into being, often needing no more than a few words exchanged between officers. Work parties came together from both sides to bury the dead. The English won the hearts of the Germans by giving them handmade wooden crosses for their fallen comrades’ graves. Side by side they worked, and side by side they stood for a joint burial service, read first by an English padre in English, then, in German, by a German boy studying for the ministry. Every head was bared. German and English alike, “officers and men,” one Scotsman wrote, “bitter enemies as they were, uncovered, reverent, and for the moment united in offering for their dead the last offices of homage and honour.”

“Is it merely fanciful,” one Scottish minister wrote, “to say that, on that anniversary of the birth of God’s Son, there must have been some gracious influence of the spirit of Christ brooding over the combatants and suggesting, though but for a brief moment, the brotherhood of man in the great family of the Father?”

“Sing out! Sing out with joy! God’s light has descended!”