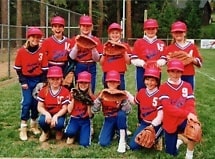 I was born and raised in a spiritual intentional community. To answer your first question, yes, I loved it. If you google “intentional community” and try to find a glowing testimonial from a child raised in one, you’ll most likely find none. I certainly haven’t. Every article I’ve ever read has been from someone who is coming to grips with the struggles and pain inflicted by their childhood in a failed commune from the 1960s.

I thought I would bring in a new perspective, since there seems to be a missing voice. The voice of a former community kid who loved it; who felt surrounded by joy and magic and love and light. That’s me. I loved it so much, I am raising my own kids here.

At the time of my birth in January 1981, Ananda Village was just four years into it’s recovery from a devastating fire. The fire wiped out nearly every home and all the infrastructure that the dedicated few who came since it’s founding in 1969 had managed to build. My mother, Padma, was one of the many who lost her home. At the ripe age of 19 she had dropped out of UC Berkeley and moved to this crazy “commune” in the mountains to dedicate her life to finding God through the practices of yoga. Her family thought she was pretty nuts.

After the fire she went to work in Monterey to earn money in order to rebuild. There she met my dad, Hriman, fresh from his 18-month trek from Europe to India in a VW van. Yes, my parents were super hippies.

My earliest memories are of my nuclear family; my big brother showering me with devotion, my dad reading stories and playing games, my mom’s hugs. But, when I was old enough for a small amount of independence, community living really kicked in.

Living in Ananda, I was filled with a deep sense of security. Not a car drove past that I didn’t know the driver. Not a person walked by without a smile and a genuine greeting. My days were filled with freedom to roam the hillsides, playing imaginary games with a gaggle of friends that I still call my very best.

Summer days by the Yuba River, popsicles on the Market steps, horseback rides through grassy fields, softball games with my ever-joyful losing team the Ananda Angels… this was a childhood that feels even now as if it was a beautiful dream; not possible on this jaded earth. And yet, it was mine and a lucky few others who I love.

Paramhansa Yogananda, on whose teachings Ananda is founded, had a lot to share about working with children. Yogananda’s first vocation was the founder of a yoga school for children in Ranchi India. His disciple and the founder of Ananda, Swami Kriyananda, expanded on his methods to ultimately develop the Education for Life system. My tiny private yoga school for kids was the incubator for these ideas in America and I was the lucky one who got to benefit from them.

Every aspect of the Education for Life philosophy of raising and educating children is based on the deeper teachings of yoga. Teachings like: joy is within you; energy can be directed; yamas and niyamas (do’s and don’ts); experience is the best teacher.

I learned to love life; to be a good human; to use the power of concentration to accomplish anything. I learned to manage my own energy; something I think millions flock to yoga to master today. Thinking of all this floods my mind with memories of deep childhood meditations, experiential learning projects, the closeness of friends and the love from my teachers — several of whom still work at the Living Wisdom School of my youth.

This all sounds peachy, but of course there were challenges. I recall a time when my family was in financial difficulty. Wages were (and are) exceedingly low in order to make the economy here work. My mother needed eye surgery and my dad had to leave his community job to earn more money as a CPA in Nevada City. It didn’t last long, but it was a chapter that was hard on everyone. He worked long hours, drove a long way and we had financial stress.

I remember arguments between my mom and teachers about my education — she was always worried that I would get what I needed, as most moms would be. I remember being a bratty teenager and wishing I could just, for one moment, get away with SOMETHING!!! Living among a bunch of yogis means that they are highly sensitive to a “disturbance in the Force.” They just KNOW when you’ve screwed up.

I could really go on for a whole book. Maybe I will someday; it would be a fun memoir to write. In the meantime, I wanted to share a glimpse of what a joy living in an intentional spiritual community can be.

There are many reasons that Ananda has worked where others have failed. An academic study of the subject would be the best way to do the topic justice. Suffice it say, from the vantage point where I sit, the fact that it is not a literal “commune” is major; receiving a salary and maintaining a level of independence creates initiative. Also important are the shared values and beliefs that a Guru brings. But mostly, it’s dedication to daily meditation. Everyone seems to improve by meditation.

There’s so much more to say, but if you want to see something that will explain a little more from the comfort of your own home, watch Finding Happiness movie.

About the Author
gita

Gita is Director of Development at Ananda Sangha Worldwide. Born and raised at Ananda Village, Gita studied and worked in the nonprofit sector in San Francisco, Seattle, and Los Angeles before returning in 2011. Today, Gita lives at Ananda Village with her husband and their two young children.
Read more