If I were to choose a spiritual name for myself, it would have to be Gratitude.

I started drinking in my early teens. Drugs came later, in the ’60s, just before I turned twenty. All my friends drank, and everything that happened after sundown involved drugs and alcohol. So we were more inclined to play loud music than to play chess. Drinkers hang out with other drinkers. It’s tidy that way, no unpleasant images in the mirror-everyone looks like you.

Whatever we were having, I consumed more of it than my friends. It always took more to get me to the edge of contentment, and the edge was as close as I could ever get. In a typical evening, I would drink a six-pack of beer, a substantial amount of hard liquor, and use whatever drugs were at hand.

I never got mean, never got in fights, never fell down, but from my early teens, I was drunk every night of my life. In those early years, I had a couple of auto accidents, but nothing after that, even though, if it was dark, driving or not, I was drunk.

I never drank during the day. In fact, I couldn’t imagine why anyone would want to be dull while it was still light. During the day, I went for stimulants, but, come nightfall, nothing could stop me from drinking. Stimulants during the day meant more alcohol to come down at night, then more stimulants the next day to push away the effects of the previous night’s drinking: truly a vicious and deadly cycle. I also smoked quite a lot of marijuana, occasionally took mushrooms, and used cocaine. My friends either kept up, or they fell away. Some died, many ended up permanently damaged.

I was married in the early ’80s, but my habits didn’t change. I merely couched them now in transparent respectability, more evenings out drinking good wine, or at home drinking good scotch and premium beer. Cocaine replaced the cruder stimulants. But the truth is, I would have drunk cheap gin, if that were all I had.

My wife drank only moderately, just an occasional glass or two of wine with dinner. It is unusual for a non-drinker to marry someone who is already wedded to this habit of nightly oblivion, but then, she never knew me any other way. We didn’t discuss it. I figured it was just part of the package she had chosen. She clearly saw something in me beyond the man she married, and she knew the power of prayer.

We bought a house and built a business. At one point, though, she expressed enough concern for my overall health that I agreed to have a ” routine” physical. The doctor stated unequivocally that I was on my way to an unpleasant, and perhaps lingering, death.

He said it would be dangerous for me to try to quit drinking on my own. The withdrawal symptoms would be so severe I might even have seizures. He wanted me to go straight from his office to the hospital.

To bolster his argument, he called in another patient, an ex-alcoholic, who, he said, just happened to be in the waiting room. This gentleman, in a glib and self-important voice, rambled through a fragmented assessment of my future unless I followed the good doctor’s advice. But he was so cognitively damaged it was easy for me to brush off both him and his counsel. I genuinely felt I would rather drink myself to death than wind up like him.

The meeting with the doctor was such a disaster neither my wife nor I ever mentioned it again.

In the middle of all of this, sometime in the early ’80s, we started going to Ananda classes and services. In 1986, when Swami Kriyananda announced he was leading a pilgrimage to Southern California to see Master’s shrines-Mt. Washington, Encinitas, the Lake Shrine, and the crypt-we decided to go along.

The first evening in Encinitas, at the Sanderling Hotel, Swamiji held a Discipleship Initiation. I sat in the back of the room, watching people go up and kneel before him. He blessed each one by placing his finger at their spiritual eye, the point between the eyebrows. After a moment, he would remove his hand. The person would then rise, bow to Swamiji with folded hands, and return to his seat.

I just couldn’t identify with the ritual. I was strongly drawn to Master, and I had great respect for Swamiji, even though I had spoken to him only a couple of times. I wasn’t sure it was the right time for me to become a disciple, or if, in truth, Master would want me.

So I just watched, like a stone gargoyle peering down from a cathedral roof. Then, somehow, I found myself kneeling in front of Swamiji. I don’t recall why I decided to do it. In fact, I don’t remember deciding to do it at all, but there I was.

When he touched me at the spiritual eye, there was no spark of light, no uncontrollable trembling, no sound of crashing waves. As I recall, I didn’t feel anything.

But after the blessing, I stood up, bowed respectfully to Swamiji, and walked away a different person.

That was two decades ago. Since that moment I’ve had not a hint, not a longing, not a whisper of unnamed or unfulfilled desire for drugs or alcohol. I went, as they say, cold turkey on a twenty-five year habit without a single unpleasant symptom.

I rarely tell anyone with a drinking or a drug problem about my experience. I have seen how terribly difficult it is for them to quit. I want to help; I love them for their courage, but they need inspiration that is within their reach: something as close, as tangible, and as obtainable as the substances and the mental state they crave.

I do not believe it would inspire someone in the throes of the struggle with addiction, to hear that God, without even being (consciously) invited, came and lifted my burden, leaving nothing behind but gratitude. It would be too far beyond hope, leaving them feeling even more isolated and unworthy.

I often hear the statement, ” I am a recovering alcoholic.” Those who use that phrase have earned the right to say it. They have fought hard, and for most of them it is a lifelong struggle.

My life, however, was changed in an instant. What I can and do say, with humility and endless gratitude, is, ” I am the disciple of a Great Avatar, and the loving student of a Great Teacher who can, with his touch, channel the Master’s transforming grace.”

~ From an Ananda devotee ~

About the Author
Swami Kriyananda As We Have Known Him 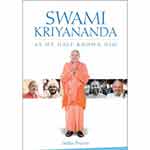 The greatness of a spiritual teacher is only partially revealed by the work of his own hands.
Read more