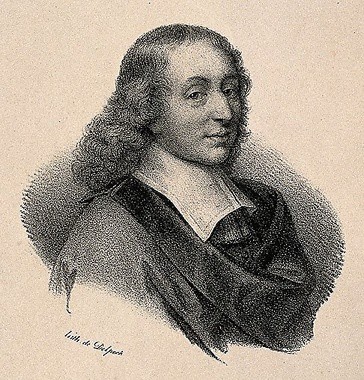 Blaise Pascal was an influential French scientist who lived in the 1600s. At age twelve, before he had received any formal training in geometry, Pascal independently discovered and demonstrated Euclid’s thirty-two propositions.

It’s not surprising, then, that as an adult Pascal would complete important works on mathematics and experimental physics. He made important contributions to geometry and calculus, and helped develop the theory of probability. At 19, he invented the world’s first mechanical calculator.

Pascal even gave us buses. Noticing a crowd of people all headed in the same direction to work, he came up with the idea of the bus and in 1662 helped form the first bus company.

Pascal grew up accepting the Bible as inspired by God, but in a rather vague and abstract way. He looked into Jainism, a Catholic reform movement that emphasized the Augustinian and Calvinist concept of grace. Nonetheless, he was troubled by a sense of spiritual desolation.

Disgusted with himself he once wrote: “If one does not know himself to be full of pride, ambition, concupiscence, weakness, pettiness, injustice, one is very blind. And if, knowing this, a man does not desire to be delivered, what can one say to him?”

On November 23, 1654, Pascal’s horses bolted and plunged off a bridge. Pascal was thrown to the roadway and saw this as a warning from God. That night he experienced a conversion that would cause his outstanding scientific work to take second place in his pursuits. Light flooded his room and he felt that he was in the presence of Jesus. For the rest of his life he carried around a piece of parchment sewn into his coat, inscribed with ecstatic phrases:

“God of Abraham, God of Isaac, God of Jacob, not of the philosophers and scholars…Joy, joy, joy, tears of joy…’This is life eternal that they might know you, the only true God, and Jesus Christ, whom you have sent.’ Jesus Christ. Jesus Christ…May I not fall from him forever…I will not forget your word. Amen.”

From that day, he realized that he must live primarily for God, and he began to devote himself to the welfare of the poor.

Pascal realized that his faith, though intensely personal, could not be limited to his own salvation. His love for God drove him to love the poor. “I love poverty” he said, “because he loved it. I like wealth because it gives a means to assist the needy.”

Increasingly Pascal deprived himself so that he could give more. He sold his coach and horses, his fine furniture and silverware, and even his library in order to give the proceeds to the poor. When he received an advance of 1000 francs for his first bus he sent the money to the poor in Blois who had suffered a bitter winter. He then signed over his interest in the bus company to the hospitals of Paris and Clermont.

When Pascal died at 39 on August 19, 1662 his funeral was attended by family, friends, scientific colleagues, worldly companions, converts, and writers. The back of the church was filled with the poor, each and every person among them someone whom Pascal had helped.

He wrote: “Let it not be imagined that a life of godliness must necessarily be a life of melancholy and gloominess; for a man only resigns some pleasures to enjoy others infinitely greater.”