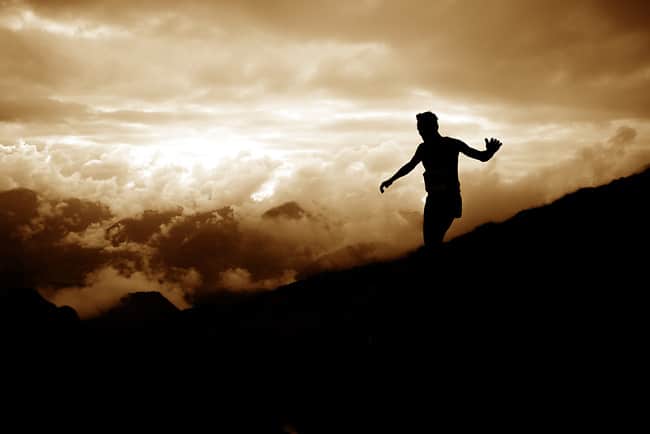 How can we exercise in a way that will put us in attunement with Truth, so that we will achieve physical health, fitness, and joy as efficiently as possible?

For years, I had a spiritual dharma, a life’s duty, to discover how universal, nonsectarian spiritual principles could be applied to advantage in exercise and sports training. I had many theories about it, but the art of it escaped me. It took me more than twenty years to find the keys.

There was a period of about six months in the late 1990s when I ran hundreds of miles on the trails of the Coastal Range, without feeling the barest hint of inspiration.

On a hot summer day, laboring up a long hill, beating myself up for my spiritual shortcomings while praying fiercely and thinking, thinking, thinking, I heard Master’s voice. He said, chuckling with wonder, “You’re making it much harder than it needs to be!”

Though I tried to relax, the great secret of joyful exercise continued to hide from me.

Weeks later, after toiling up another long hill, I exclaimed inwardly, “What is wrong? I want to do the right thing! I will do anything!”

I then heard Swami Kriyananda’s voice. It said, quietly and simply: “Do it to please God.”

Whereupon I spent months trying to figure out how to please God. And, to make a long story short, I found that it required a difficult but very simple practice: I had to give God everything.

The strange thing is that once I began to run without caring about finding happiness, I began to find it.  Exercise became much more relaxing and enjoyable. I no longer graded my runs by how strictly I was able to conform to a set of imagined spiritual “rules.”

It mattered only to be able to talk quietly and openly with Divine Mother. That was the true challenge – and a challenge it most certainly was. It isn’t easy, as an adult with a heart that is encrusted with all manner of grown-up self-definitions, to find the soul-self inside that can talk to God with the perfect innocence of a little child.

I realized that the way to find happiness was to enjoy each moment, rain or shine, and not care if my body sped along or if it was exhausted. It wasn’t the results that defined the quality of my runs, but the inner feeling of harmony.

I found that I could have horrible runs where my body could barely limp along, and that I could finish those runs with great joy. The secret, always, was to do the rightthing. If my body was only up to running at a snail’s pace, and if it was the rightthing, and if I happily complied, I found that it opened paths to an unexpected happiness. I realized that this was what it meant to “give it to God.”

While trying to feel the right pace for the day, I began to look for a feeling that I thought of as the “harmony zone.” I discovered that there was no single answer to the question of how to “exercise spiritually,” or how to train on a given day, but that each day brought new answers that could only be known by listening inwardly for that subtle feeling of guidance – of rightness.