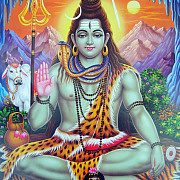 Lord Shiva, as the Adi (first) yogi, is revered by his devotees as the embodiment of yogic perfection and as the giver of yoga science to mankind. Depictions of him beautifully portray the signs of complete yoga-mastery: his two eyes are half closed in meditation, while the all-seeing eye of intuition is open in his forehead. The snake garlanded around his neck attests to his having raised the life-force (kundalini) and subdued maya. His forehead is adorned with a crescent moon, symbolizing that the ego has been spiritualized and merged in final oneness with Spirit. And (as it turns out, importantly for us) the river Ganges is depicted as flowing out of his matted locks into the world.

This depiction of the Ganges has its origin in Indian mythology: Eons ago, the Indian king Bhagiratha’s ancestors were cursed by a rishi (as usual!) to not find redemption until the sacred river Ganga (Ganges), then residing in heaven, were brought to earth and made to flow over their ashes. Bhagiratha, after years of penance, obtained from Brahma the boon of the Ganges’ descent to earth. However, lest the earth be unable to endure the powerful flow of Ganga’s descent, Lord Shiva caught Ganga’s waters in his matted locks, whence he released them in a controlled, benign flow. As a result, Lord Shiva received the epithet “Gangadhar,” meaning “He who holds or controls the (river) Ganga.”

Outer mythology often hides a deeper inner meaning. In this case we get a glimpse of this meaning, by sheer luck, through Paramhansa Yogananda’s Autobiography of a Yogi. He states there that Lahiri Mahasaya’s name in his previous life was “Gangadhar,” and that he was so addressed by Babaji at their first meeting, outside “Babaji’s Cave” near Ranikhet. Yogananda therefore explains the genesis of this name in a footnote (much of the previous paragraph comes from this same footnote) which contains this line:

The metaphysical significance of “Gangadhar” is “he who has control over the ‘river’ of life-current in the spine.”

A perfect epithet for Lord Shiva, no doubt! But at this point, the keen yoga student notices an anomaly. From Day One the aspiring yogi is taught that the yogic motto is “Inward and upward!” For this is the classic yogic goal: to direct the life-current (kundalini) inward and upward through the chakras to the brain. And here Lord Shiva, the giver of yoga science, demonstrates his complete yoga mastery by doing just the opposite: the “river of life-current” descends from his sahasrara out into the world!

How can a downward and outward flow of energy (and a lot of energy too, for the Ganges is a mighty river) be a sign of yoga-perfection? For disciples the next step is easy: We seek the answer in our Guru’s teachings. And Swami Kriyananda, in clarifying for the coming generations the subtle points of Paramhansa Yogananda’s life and teachings, writes in his book Cities of Light something that is truly novel:

The time has come for people to live lives of even higher dedication than that which inspired monks and nuns in the past. Those dedicated souls lived lives that were focused on God, but theirs was also a spirit of negative denial of this world, which God made.

The time has come now for people to direct their spiritual awareness also downward into matter . . . to everything they do: to their work, to education, to family life, to friendship, to their communications with strangers, to the way they build their homes—to all the most mundane, practical aspects of daily, human life.

Men need now to become God-centered from within, and from that center to see God everywhere, in everything.

Swami Kriyananda clarifies in these excerpts, as he did indeed through his life’s example, the subtle yoga teaching that raising the energy inward and upward is only one part of mastering the life-force. The yogi must learn also how to direct this energy down and out in a strong flow, while retaining complete control over it, so that he can act as an instrument of divine blessing in God’s creation. “Negative denial of the world,” as Swamiji points out, implies that complete yoga-union has still not been attained, for it is a denial of God in his aspect as the Cosmic Creator.

Swami Vivekananda too, upon once encountering a saint who wanted nothing to do with the world, and lived always behind a walled-up cave evading all visitors (including saints!), made a telling comment:

“This saint perhaps is not perfected—too much of rites, vows, observances and too much of self-concealment. The ocean in its fullness cannot be contained within its shores, I am sure.”

In the Chapter on Kriya Yoga Paramhansa Yogananda explains further:

Yoga enables the devotee to switch off or on, at will, life current from the five sense telephones of sight, sound, smell, taste, and touch. Attaining this power of sense-disconnection, the yogi finds it simple to unite his mind at will with divine realms or with the world of matter.

Yoga mastery is thus not one sided, teaching us only to withdraw into deep meditation. The obverse holds as well: we learn how to function perfectly in this world, created by God, being 100% “in” it but not “of” it. And this is what the depiction of Shiva, as the Perfected Yogi, symbolizes: the energy (Ganga) has been raised up and locked firmly at the sahasrara (in his “matted locks”), but then released back into “the world of matter” as a strong yet completely controlled flow, to serve as a source of blessings to all Creation. In handing Yogananda a broom right after bestowing upon him the highest experience of samadhi, Sri Yukteswar was teaching his disciple this same principle.

Paramhansa Yogananda, too, did not teach the path of world-rejecting meditation. He taught instead the Shiva-like path of Self-realization: daily deep meditation to raise the consciousness inward and upward, and then also to bring that high consciousness down in a strong, creative flow that spiritualizes all our activities and uplifts our fellow beings. This yoga training is complete, for it helps us overcome the final duality—between the God perceived in meditation and God as manifest in His Creation—thus making us completely free.

Through our Guru’s training, let us aspire towards this perfect yoga mastery, the essence of which is also captured so beautifully in Swami Kriyananda’s affirmation* for Practicality:

Though my spirit soars in the skies of consciousness, my feet and hands labor here on earth to make truth real to all.