As a nod to the Halloween season, with its focus on the unusual, I thought to share a couple of dreams that featured my spiritual guide—and instrument of my guru, Paramhansa Yogananda—his direct disciple, Swami Kriyananda.

When I was a young man I used to dream that I could fly. I enjoyed these nocturnal experiences, and after setting foot on the spiritual path, hoped that they represented some form of spiritual growth. Yet, I wasn’t sure about them.

Soon after visiting Ananda Village near Nevada City, California, and meeting Swami Kriyananda, I had another of these dreams of flight. After soaring about for a time, I landed on the balcony of a building where some sort of social gathering was taking place.

Immediately, Swami Kriyananda stepped out of the French doors of this building, and, in the most genial and friendly fashion imaginable, he slugged me!

At that moment, I woke up.

I’d felt zero animosity from Swamiji; rather solely, from him, the desire to help. The clear message I got from this experience was that I needed to be more grounded. Indeed, at this time I was undergoing a floaty feeling in meditation and a sense of being disconnected from my body. After this dream I seldom dreamed of flying, and when I did, those dreams had a clearer, more inspiring quality to them. 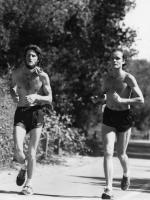 Richard and Raghu Clark running in an Ananda fundraising

Through years of daily practice of Yogananda’s energization exercises, and the challenges Divine Mother sends to help us grow spiritually, I was glad to see, over time, improvement in this area.

It wasn’t long after this that Swami began encouraging me to strengthen my energy field. I sought to do this in a number of ways, including running twenty miles for one Ananda fundraiser and biking seventy miles in another.

But there are some moments of trial in which the lesson is that we cannot depend on our strength alone.

And this brings me to my second unusual dream.

A little less than ten years ago, I found myself in an unenviable dream state. I don’t recall exactly what came beforehand, but I was suddenly engulfed in some sort of force field in which I was barely able to move. Along with this, some invisible force was pulling me somewhere.

I didn’t know where I was headed, but I wasn’t looking forward to finding out.

I did everything in my power to break out of this force field. When nothing worked, I began to pray to God and guru for help.

Suddenly, instead of being pulled through empty space, I found myself moving slowly across the ceiling of a room in which a meeting was taking place. Looking down, I could see certain people involved in the leadership of Ananda gathered at a table. Oblivious to my situation and their invisible witness, the meeting continued.

Oblivious, that is to say, to everyone but Swamiji, who was seated directly across from me at the head of the table. Within moments of my appearance, he abruptly looked up and locked eyes with me. A wave of powerful energy flowed from him and, in that instant, I was free. In gratitude and great relief, I mentally bowed to Swami and passed soon after into a peaceful and dreamless sleep.

Paramhansa Yogananda once had a similar experience. Though he was an avatar—an incarnation of divine light and joy into this world—at one point a negative energy held him trapped. He prayed and his guru, Sri Yukteswar, appeared and freed him.

Swami Kriyananda explained Yogananda’s story by pointing out that there are times on the spiritual path when we must depend on God’s grace through the guru to get through.

The day after I had this second dream I happened to attend a spiritual gathering that Swamiji was leading. In the middle of his talk (and apropos, if I remember rightly, of nothing much), Swami turned his head, looked directly at me, and said:

“If you want to be free, all it takes is the strong desire for freedom.”