Before I moved to Ananda, I worked for a fledgling sports magazine, Runner’s World, with its offices in Mountain View on the San Francisco Peninsula. I discovered Ananda and Swamiji in 1974 through his book Cooperative Communities – How to Start Them and Why, found while browsing in a bookstore in nearby Palo Alto.

…job, church, and home in one place.

Ananda seemed the answer to a prayer. I had always been attracted by the idea of a community where devotees could live, work, and worship together with “job, church, and home in one place,” as Paramhansa Yogananda advocated.

Earlier, as a Self-Realization Fellowship (SRF) member living in Los Angeles, I had often wondered why the lay disciples didn’t take the step, which seemed so obvious to me, of forming a community of some sort together, perhaps in rented apartments. 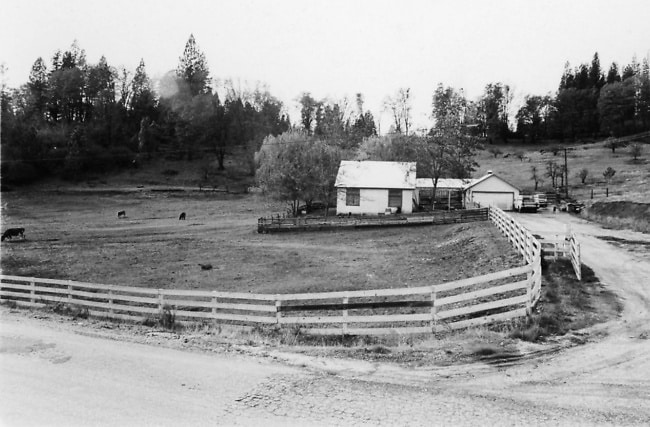 The idea of an entire community of devotees that resembled a small town had never crossed my mind. Yet it made perfect sense for disciples to live together, serve together, worship together, and raise their children in an atmosphere that would encourage their aspirations instead of constantly knocking them down.

I wasn’t able to move to Ananda Village immediately. I had a divorce settlement to pay off, and I wanted to come to Ananda debt-free, with my membership fees paid in full. The fees went toward paying off the land. At the time, a sizable chunk of money was still owed on the main property.

When I sent the final check for $100 toward the $1000 membership, I asked an artist in the publishing company where I worked to decorate the check with flowers. I made the move in February 1976. 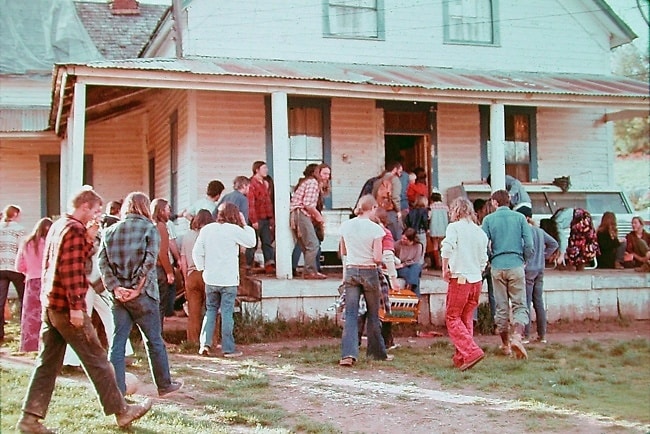 I set up the tipi in a very remote, far-flung spot on the Ananda land, under trees that overlooked a beautiful meadow, intent on leading a life of renunciation and solitary prayer and meditation.

I never spent a single night in the tipi. In April of that year, the forest fire that ravaged Ananda Village passed directly over the spot where I had planted the tipi.

On the day I arrived, I was asked to live in a run-down farmhouse at the entrance to the Village and help care for an 80-year-old former SRF nun who lived there. After several months my space in the house was needed, and I began sleeping on the floor of the Publications building (“Pubble”).

Swami Kriyananda was writing his autobiography, The Path, at the time, and on most nights the front door of Pubble would bang open at 2 or 3 a.m., the lights would flash on, and Kalyani, a supercharged nun, would march in and begin furiously typing the latest corrected manuscript pages.

An hour later the process was reversed – the lights went out, the door slammed, and Kalyani dashed into the night to deliver the pages. 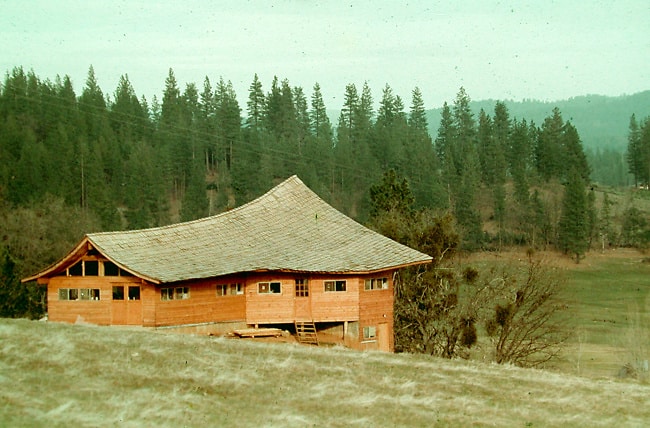 I wanted to be a monk in the worst way. My idea of our life at Ananda was that we would spend most of our waking hours meditating and thinking of God and work just enough to keep the place going.

But Swamiji’s idea was different. He didn’t give the slightest encouragement to my dreams of a hermit’s life – witness how I ended up serving an ancient nun and sleeping on the office floor.

Our lives at Ananda reflected what Master had told Swamiji his life would be: “work plus meditation.”

At one point I asked Swamiji point-blank if I could join the monastic order. In truth, I didn’t ask him – I pestered him. “I want to be a monk!” I said.

Swamiji looked at me kindly and said, “I think it would be great.” 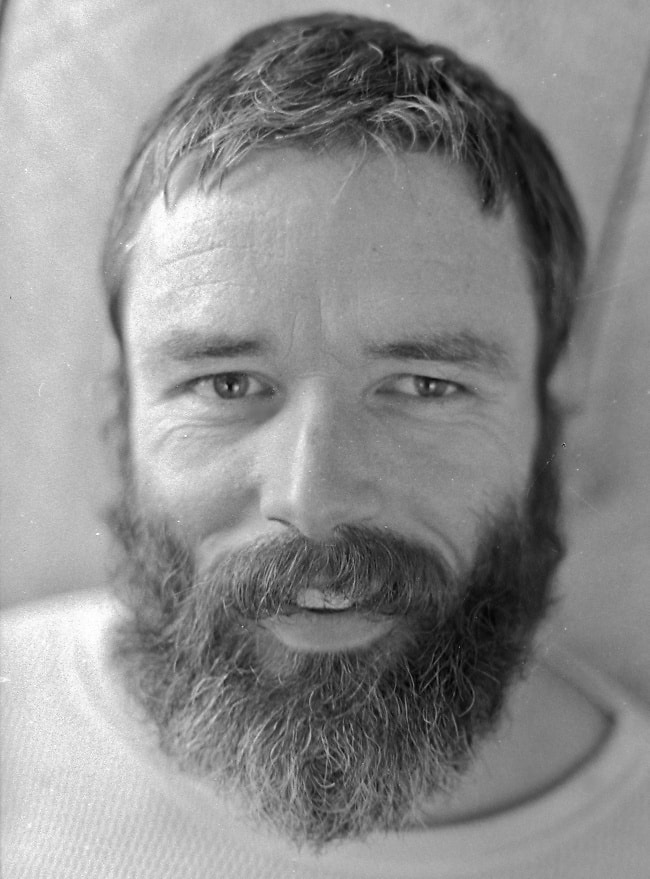 I grasped his meaning – there was no way that Rambhakta would be a monk. But I found it difficult to accept the truth in my heart. I thought, “Yes, it would be great,” even though I knew it wouldn’t happen. As the years rolled by, I gradually accepted that my greatest need was to learn to expand my heart to others through relationships, and by learning to serve.

Soon I was spending time with a woman whose name was Sahaja. It was a platonic relationship – we were really no more than friends. Swamiji didn’t say a word either for or against it.

At one point many Ananda members, including Swamiji, had their past lives read by a psychic who lived in the Napa Valley. A friend persuaded me to have a reading, during which the psychic told me that Sahaja had been my mother in a former incarnation.

Well – that wasn’t what I wanted to hear! I longed for a romantic relationship, but not with Mom from a past life. When I told Swamiji what the psychic had said, he replied without a moment’s hesitation, “You should view all women as your Divine Mother.”

Well, that wasn’t the advice I’d have preferred, either. The impasse was resolved when the woman left Ananda.

When I mentioned the past-life reading to Asha, she asked to borrow the tape, explaining that Swamiji was resting from his labors on The Path and might like to listen to it.

The psychic had told me that I needed to learn to “get along with all kinds of people.” When Asha returned the tape, she reported that Swamiji had said, “She (the psychic) really knows what he is like.”

Over the years, I would learn priceless lessons through relationships. With Swamiji’s approval, I married a wonderful woman. The head of the women’s monastery, Nayaswami Seva, said of my wife, “She has a very good heart.”

Soon after we began spending time together, Nitai, the head of the men’s monastery, told me that Swamiji had remarked to the monks, “You may be surprised to hear me say this, but look how happy Rambhakta is in that relationship. It has been really good for him.”

You should view all women as your Divine Mother.-Swami Kriyananda

Sometime during that period, I asked Swamiji for his advice on how to open my heart. I thought that he might suggest I do something impressive – that I chant for hours a day, or return to school and become a doctor, or join the Peace Corps. Instead, he said, “Bring your wife flowers.”

I realized that it was advice on a scale that I could manage and that doing small things for my wife would open my heart in a natural way. I remembered a saying of Mahatma Gandhi, that the small God-reminding things we do may not be of world-shaking importance, but that it is very important that we do them.

After 15 years of married life, my wife and I parted. Our karma was interesting, to say the least. We shared the same birthday, January 21, although my wife was nine years younger. When I was seven or eight, my mother had a still-born baby girl with red hair named Julia – my wife’s name, and she had red hair. My mother and my wife’s mother had birthdays ten days apart, and my father and her father had birthdays four days apart. Our relationship had a strong brother-sister flavor.

In 1995, I moved to the Ananda community in Mountain View, where I would spend two years serving on the legal team that defended Ananda against SRF’s lawsuit.

In 1999, Ishani and I became friends. It was a whirlwind courtship. The romantic phase was over almost before it started. Divine Mother clearly wanted us to roll up our sleeves and get down to the hard work of expanding our hearts.

For the first eight years that we were together, we had a terrible time. On virtually every weekend there were excruciating misunderstandings. It was the hardest experience of my life. God was no longer gently coaxing my heart to open, He was ripping it to shreds, forcing me to open myself to include Ishani’s realities.

After years of soul-searing struggle, we came to a point where we were both exhausted and ready to throw in the towel.

We had no choice but to stick it out.

I asked Nayaswami Asha for her advice. I respected her as a channel for Swami Kriyananda’s guidance.

When we met, she said, “We were talking with Swamiji on the phone the other day from India. He said, ‘Ishani is a wonderful woman. I am so happy that Rambhakta and Ishani are together.’”

What could we do? We had no choice but to stick it out! Fortunately, the days of testing were numbered.  Several months later, I met with Asha again.

I said, “Whenever Ishani and I have a disagreement, there’s one thing I can do that will reliably make everything right. If I chant and pray with all my energy while driving in the hills, it expands my heart to a point where Divine Mother can guide me to do the right thing.” 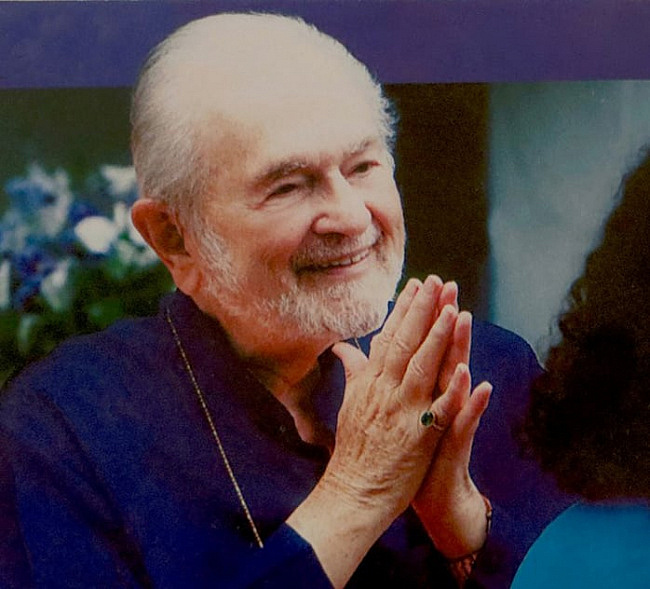 Asha was silent. I knew that she was asking Swamiji to guide her next words. Finally, in a low voice, almost a whisper, she said, “If you could go to Divine Mother in the moment…”

The guidance was gently given as if she weren’t sure that I was ready to receive it. But it proved the answer to ending the terrible pain that we had endured for years. I could always sense when the storm clouds were gathering – there would be a crackling tension and disharmony in the air.

The next time I felt it, I immediately turned inward and prayed to Divine Mother with all my heart and soul and mind and strength. “Divine Mother,” I said, “I will do ANYTHING to create harmony in this situation. But YOU MUST guide me!”

I took myself forcibly in hand, rejecting the slightest urge to respond in anger or to justify myself or argue or ignore the issue. And it worked.

In the years that followed, by God’s grace, I began to feel deep compassion for Ishani. We had known from the start that our natures were very different – just how different was a revelation. In time, I came to appreciate that her nature was very beautiful. The experience of our lives together resolved as a great blessing. I realized that it was the Divine Mother Herself who had come through Ishani to help me learn an important spiritual lesson. I am endlessly grateful to Ishani for the difficult years during which she loved heroically.

My story of relationships is a small one, but it showed me once again that Swamiji was an infallible instrument for divine grace. He was ever ready to help us open our hearts to God’s love. 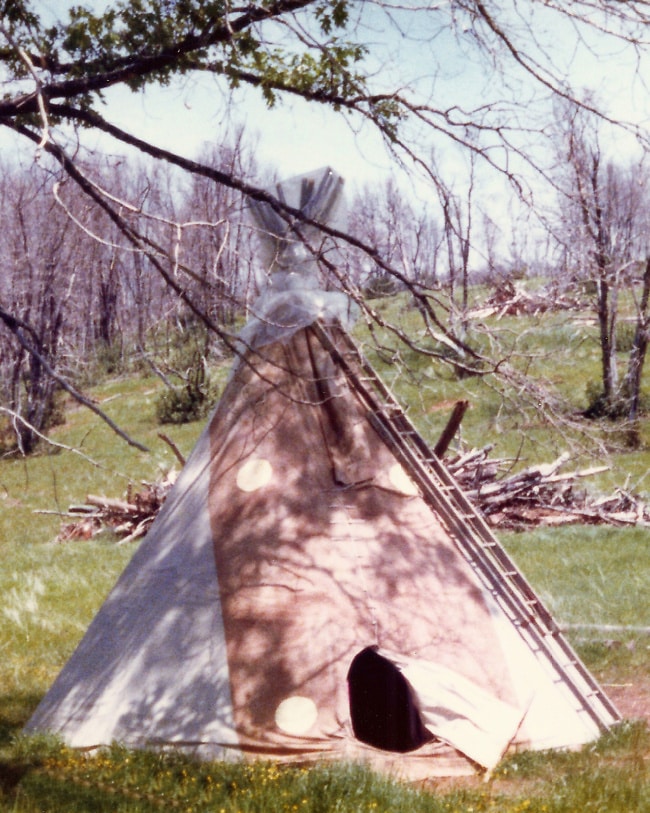 Excerpted from Swami Kriyananda Stories: Encounters With a Direct Disciple of Paramhansa Yogananda.

Rambhakta became a disciple of Paramhansa Yogananda in 1966. He moved to Ananda Village in 1976 and lives in the Ananda community in Mountain View, California.

Swami Kriyananda Stories: Encounters with a Direct Disciple of Paramhansa Yogananda (2020). An ordinary seeker’s experiences with a Self-realized guide who was one with God.

Conversations With Ananda: How We Serve – Seventy Pioneering Ananda Members Tell Their Stories (2020). Real-life experiences of the residents of the Ananda communities who turn to God for answers in their work and their daily lives.

Head & Heart: How a Balanced Education Nurtures Happy Children Who Succeed in School & Life (2018). Based on conversations with the teachers of Living Wisdom School in Palo Alto, California, Head & Heart serves as an introduction to Education for Life for parents and teachers worldwide.

The Joyful Athlete: The Wisdom of the Heart in Exercise & Sports Training (2015). How great athletes and coaches have used universal spiritual principles to find success and joy, and how we can apply the same principles in our fitness routine.