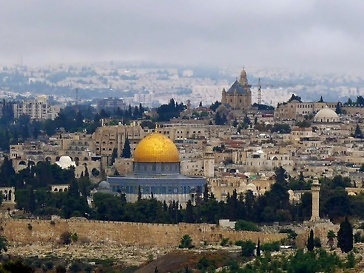 As a child growing up in Israel in the Jewish faith, I believed that Israel was the Promised Land. In my early twenties, as I started to practice yoga and meditation, I began to question whether the Promised Land was a physical territory.

When I became a disciple of Paramhansa Yogananda, studied his teachings and practiced the meditation techniques that he brought from India, I began to understand that the Promised Land is within us.

Over the next 25 years as I lived at Ananda Village, meditated, and served my guru, some of my self definitions were dissolved, particularly my identity of belonging to a specific nation and religion.

Baptism in the Jordan River

In October of 2015 my husband, Gyandev, and I led a Pilgrimage to Israel. We followed the footsteps of Jesus from his birth to his crucifixion.

Paramhansa Yogananda wrote in Autobiography of a Yogi: 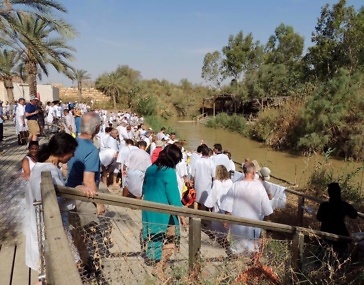 Baptism site, in the Jordan River

“The spirit of Christ is all-pervasive in Palestine; I walked reverently by his side at Bethlehem, Gethsemane, Calvary, the holy mount of Olives, and by the River Jordan and the Sea of Galilee.”

We visited many sacred and inspiring places in Israel, but the one that stands out the most for me is the Jordan River. Growing up in a Jewish family, I had never been to the baptism site in the Jordan River. I understood that only Christians went there.

When we arrived at the Jordan River, I was a bit anxious, not knowing what to expect. Our plan was for Gyandev and me to go first into the river, and then our group members would enter, two at the time, dip in the water, and receive a blessing from us. 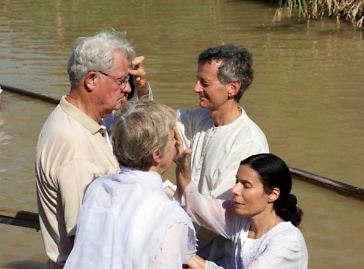 Blessing in the Jordan River

Stepping into the Jordan River, I was unprepared for the experience I had.  I felt I had entered a sacred temple of light. My whole body was filled with light, and my consciousness was lifted to a higher realm. I wasn’t aware of my body and personality, but only of a consciousness of light. As I blessed members of our group, I felt like an empty vessel through which divine energy flowed.

When we got out of the water, I had to sit down to regain consciousness and be present in my body. It took me a few days to realize what had happened. Intuitively I sensed that I was baptized by the Holy Spirit. Others in the group shared that they too experienced a spiritual baptism.

This experience helped me realize that we are all children of God, no matter what our religious background, and that there is no sectarianism in the realm of the Spirit.

When we are sincerely seeking God and inwardly receptive to Him, despite our imperfections and the veils of our delusions, God can enter into us and bless us.

How Can We Enter the Promised Land?

Paramhansa Yogananda wrote about baptism in The Second Coming of Christ, from the Amrita Foundation:

The original ceremony of baptism by water came from India. Baptism means immersion in water in order to cleanse or purify. Purification of the body should precede the purification of the mind. Hence, all souls who desired to begin living the spiritual life had to purify their bodies.

“Cleanliness is next to Godliness,” but baptism of the body, unless followed by baptism of the mind, becomes practically meaningless. If we bathe and thus purify our bodies, we will find that our mind will temporarily become purified, but unless we change our soul’s wickedness by calmness, meditation, and constant spiritual vigilance, we will remain the same old devils with bad habits in spite of the temporary purifying effect of the water on our bodies.

Swami Kriyananda writes in his book The Promise of Immortality:

The “promised land” was always inward, and only symbolized outwardly as a “land of milk and honey.” Jesus pointed out this truth to them in the words, “Neither shall they say, Lo here! or, lo there! For behold, the kingdom of God is within you.” (Luke 17:21)

The Lord calls to us unceasingly, urging us to seek Him, the Changeless Spirit, beneath all the storms of life. Inner communion with him is the highest teaching in every scripture.  It is the truth that great masters have taken birth to declare to us who, struggling in delusion though we are, seek the way to enlightenment. 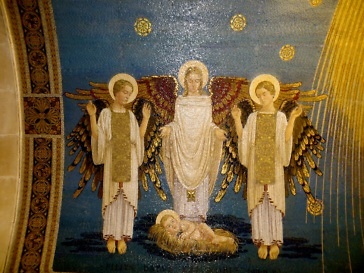 Mosaic in the Church of the Transfiguration

Our task ordained for us by Divine Will itself, is to harmonize ourselves on deeper and deeper levels with our own inner divinity.  As Jesus said, “The kingdom of God is within you.” To deepen our awareness, we must banish the delusion of ego which encourages desires and attachments. These in return whip up the restless waves of likes and dislikes in the mind, and the emotion-driven currents of action and reaction.

Jesus compared the kingdom of heaven to a tiny mustard seed (Matthew 13:31)

What Jesus referred to in that parable was man’s own latent potential to raise and expand his consciousness, spiritually, into oneness with Omnipresent God. That expansion is accomplished by removing, one by one, all the self-enclosing veils which constitute our egoic limitations.

Jesus said: “To all who received him, to them gave he power to become the sons of God.” (John 1:12) We must cooperate with divine grace for the devotee to achieve transformation from a deluded human being, confined in egoic limitation, into a “son of God”—that is, to become, like Jesus, one with the Christ consciousness.

Listen to Door of My Heart, chanted by Swami Kriyananda in various languages.

Listen to Swami Kriyananda reading: In The Land of Dreams,  from Whispers from Eternity by Paramhansa Yogananda.