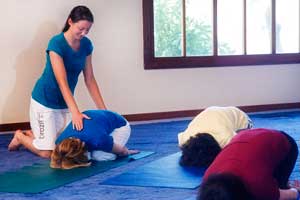 Melody is a yoga instructor at The Expanding Light, Ananda Village’s yoga and meditation retreat.

I’ve had the privilege and honor for many years now of sharing an office with some of Ananda’s finest ministers and meditation instructors. Each of the desks around me belong to long-time devotees who have been on our path for at least 25 years. I am the only one in that office who is fairly new, and this story will probably show it.

I was recently sitting at my desk immersed in several projects. I was teaching a course that was going to begin that evening and there was still quite a lot to do before it started. There were 15 students arriving that evening and the thought of fulfilling their expectations for the course was beginning to pressure me to work more quickly. To say it plainly, I was feeling stressed by the duties that lay before me.

Across from me that morning was Anandi working at her desk. Her duties often consist of teaching courses and scheduling classes so she was making phone calls and writing emails. Anandi was actually one of the first devotees to live here in the early 70’s. She’s had many opportunities over these 40+ years of Ananda life to study and learn from Swami Kriyananda. I’ve heard her tell quite a few stories of lessons she learned from him.

I have always looked up to this great soul as being one of the most positive, energetic, and willing disciples at Ananda. Her magnetism and way of sharing the teachings has always inspired me and many others. She is an amazing example of a focused and dedicated disciple of our great Guru, Paramhansa Yogananda. 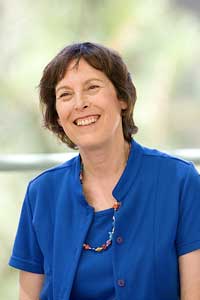 Nayaswami Anandi is a meditation and yoga instructor at The Expanding Light, and a long-time Ananda member.

While I was engrossed in my tasks, Anandi asked me, “Melody, do you know of anyone who could lead a restorative yoga program next weekend? The original instructor can no longer lead it because of a family emergency. I know you can’t do it, but can you think of anyone else who could?

My immediate thoughts which I didn’t say out loud were, “A week from now? Are you serious? Do you really think someone is going to be able to lead a program with only a week’s notice? I am sure that NOBODY will say yes to that.”

Somewhat censoring my thoughts, I replied, “The three people who know how to teach restorative are ____, ____, and _______, but I doubt any of them will be able to lead it on such short notice.

She looked at me for a moment and then looked back at her computer and continued working. I looked at my own computer and pretended to begin working again, but the silence she left me with was like a smack in the face from God. She had communicated more through her silence than she could have with words.

I introspected on what just happened. “Did I really just say that?” I thought to myself. I don’t think that was the kind of help she was looking for. Did I really think she hasn’t pondered how difficult it might be to find someone in such short notice? Obviously she’s looking for a solution and not someone to tell her that her task was impossible. Because my reply was absolutely 100% useless, she had no choice but to move on to another possible solution.

Of course I wish I had responded differently, but it was too late. I vowed that the next time she asked me for an idea, I would give her a positive response. I want to be a positive person and this was a great lesson for me to become aware of these subtle negative tendencies I still had to overcome. 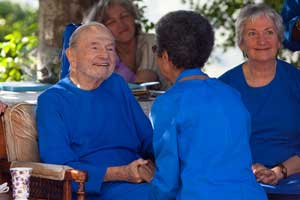 Being with her in that moment must have been like being in Swami Kriyananda’s presence. I’ve heard many stories of gurubhais learning great lessons in his company. I think he would’ve responded to me in the same way that she did—gently, but firmly pointing out to me this now obvious flaw in my character. Not directly with unkindness, but delicately, giving me the chance to receive the lesson on my own level of receptivity.

This lesson allowed me the opportunity to introspect and inwardly make the changes necessary to benefit from the experience. I realized this is why people must have had challenges being in Swamiji’s presence, especially when working close with him. It often could seem like a constant battle with one’s ego. When someone has very little or no ego they can act as a mirror for others to become more aware of their tendencies—both good and bad.

To face one’s self and decide, “Do I like what I see?” takes great courage. I suppose that those people who have the willingness to look into that mirror and make the necessary adjustments are the ones that are ultimately victorious on the spiritual path.

I am grateful for this lesson that came to me so directly that day. What a blessing it is to be in the presence of such great devotees who guide and inspire us towards our destiny of divine freedom!

About the Author
Melody Hansen

Director of Ananda Yoga® Teacher Training, Director of Restorative Yoga Teacher Training, Level 2 Ananda Yoga Teacher, E-RYT 500, Ananda Meditation® Teacher Melody is an extraordinary yoga teacher, who conveys her great knowledge of yoga asanas—from physical mechanics to spiritual upliftment—with a blend of graciousness, authority, and fun. One of Melody's greatest strengths is the purity of her transmission of Yoga. She has very little egotism to block the clear flow of inspiration she shares. Her inner life is committed and deep, and she's able to help students experience that depth in their yoga practice. Melody is also a dancer who finds great joy in practicing the movement of yoga, and guiding beginning through advanced students into the stillness of meditation that follows yoga. She is registered at the highest level through Yoga Alliance, as an E-RYT500 (Experienced Registered Yoga Teacher). She has been practicing the teachings of yoga since the age of 14, and began teaching at age 17. She is a Therapeutic Ananda Yoga Teacher who offers therapeutic yoga for private sessions and groups. Melody loves leading Ananda's Restorative Yoga Teacher Training Program. She is also trained in prenatal yoga and leads prenatal weekends, as well as helping to teach the Prenatal Yoga Teacher Training Program. Melody also offers Private Yoga Therapy Sessions through the Ananda Yoga Therapy Clinic.