Not long after Dayama’s return to India, she went for some needed rest to Kashmir. I was invited to accompany her and her entourage. She expressed joy to be able to spend hours with me in that place of peace, free from responsibilities. Sometimes we would meditate 5-6 hours together. Though I couldn’t be with her as long as I’d have liked, I’ve never forgotten her motherly love for me. An amusing recollection comes to mind: I taught her to chew cardamom seeds, which she greatly enjoyed. Even to this day I send her a package of them in special remembrance of the time we spent together there.

On July 1, 1961, I left again for Kashmir, this time to go to Amarnath,(1) where huge natural ice monuments in the forms of Lord Shiva, Durga, and Ganesha (the great elephant god) stand deeply recessed in the caves. The mountain passes are open only for the month of July, so my timing was very important. The first day Amarnath opens to pilgrims is the day in India called Guru Purnima Day, or the day in honor of the guru, in whatever form you accept him. (The last day is Rakhi Purnima, or Raksha Bardhan.) On reaching Kashmir I met the few friends who planned to make up our team, and the four of us began our trek. First, we took a bus to Pahalgao, then walked to Ananta Nag and Chandanbari, two small villages along the way. The mountain tracks here, known as pisu, border on steep, treacherous cliffs and are very narrow. They are also extremely dangerous, due partly to the fact that the views from here are so spectacular that you can get lost in their beauty and forget to watch your step! The snow-capped Himalaya, the highest mountains in the world, seem embodiments of the gods. They have so much power and aloof nobility that one is enraptured. It is very difficult to take one’s eyes from them, for they make one feel that, on some level, one’s own spirit belongs with them.

We climbed until late in the day, most of that time crawling on our hands and knees like insects until we reached Seshnag, where the auspicious Panchatarani flows. Pancha means “five,” and at this spot five rivers converge. Next, we trekked through snow until arriving at the temple two miles further on. The villagers tell a lovely story of two doves that, they say, have always lived here. They call them Durga and Shiva.

One night the heavens opened up and engulfed us with heavy rains, and then snow. Nothing was visible around us. The winds were fierce, as though they wanted to force us off the mountain. I prayed to Master please to allow us the opportunity to see the temples dedicated to God. We returned to a place called the Silk Factory to stay for a few days, until the storm abated. At last we could move on, and visited Khirvabani, a Shankaracharya temple sitting high in the forest. The place was extremely beautiful, with apple orchards in full bloom, grape arbors sprinkled with crystal snows, and with a lovely, deep blue lake set in a pristine valley of wild roses and other mountain flowers. I went there twice.

It seemed for a time that our work might be developing a major center in New Delhi. This had all begun a year and a half previously, when I received a letter from Kriyanandaji asking me to come see him. He had been lecturing in Simla (a Himalayan hill station), Patiala (a city in Punjab), Chandigarh (the capital of Himachal Pradesh), and finally in New Delhi, and had been having major success everywhere he went. As soon as possible I joined him in New Delhi, and planned to stay there about a week. I knew certain political ministers and other New Delhi dignitaries, so he asked me if I might arrange a series of lectures and a press conference, that he might meet people who could be interested in our teachings. Thus we might see, together, how much might be done towards helping India.

We invited, among others, the law minister, Mr. Asoka Sen; Mr. Ananda Swami Iyanger, the speaker of Parliament; and the director of Bharatiya Vidya Bhavan College, where Kriyananda would later speak, as well. I booked the Russell Hotel for the press conference because it had a large meeting hall. People were very enthusiastic. An American swami had come to Delhi! At first the interest was just that it was unusual for such a person to come and lecture to Indians. Soon, however, it became obvious that this man knew what he was talking about! He had real depth of spirit and sincerity. Everyone was thrilled to hear his lectures. Not only was he magnetic and joyful, but he understood the Indian people and talked as one of us. Thousands came to hear him-two thousand at his first lecture!-and his audiences kept on growing. He always spoke of his guru, and told us that to find happiness in this world one must serve a higher Source than the little ego. His lectures were deeply moving, and the Masters’ presence was felt by many there. I came for one week, and stayed for three, returning home after that, to Calcutta. 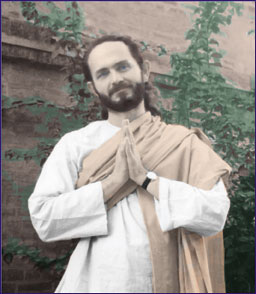 The work developing in New Delhi turned out to become a major test for our work in India, and the means through which Dubey’s vision for the organization became, as it were, set in concrete.

Kriyananda, with Dayama’s consent, set out to purchase a piece of property where SRF/YSS could build a retreat center for all of India. The money for this project had been promised him from two important sources. The big problem was getting the government’s permission, for the land he wanted was in what is called the “green belt” area around the city, which was not available for private use. Thus, obtaining this land was not an easy assignment, yet he worked day and night to help the dream to become a reality.

Mrs. Rani Bhan and her adopted son Indu (Indra Jit) helped us immeasurably. Mrs. Bhan, a disciple of Anandamoyee Ma’s from her childhood, had a friend in Indira Gandhi, the daughter of Jawaharlal Nehru, India’s prime minister. Indira Gandhi helped significantly toward obtaining the land in New Delhi. Finally, Prime Minister Nehru himself walked the property in June of 1961, and gave it his personal blessing.

Unfortunately, trouble was brewing behind our backs. Shortly before Nehru gave his actual blessings, and while everyone was filled with gratitude for the many souls who were being brought to Master, rumors arose among the directors in America-originating, it seems, from Calcutta-that Kriyananda was doing all this for his own glory. It was not true, and only Master knows why this great work was denounced to, and by, the SRF directors in America. Certain it is that Dubey was unhappy to see energy being drawn away from Calcutta, and from himself.

Back now to 1961 and my return from Kashmir. On my return from there, I realized that my friends, who were the strength behind the YSS work, had grown disillusioned. All of them had left. Dubey himself also warned me, repeatedly, to be careful not to contradict him in any way.

It wasn’t long after that that Atmanandaji Maharaj (who also was no longer in the work) became sick and had to be hospitalized for a month. No help came from YSS. Dubey stopped Atmananda’s medical and pocket expenses, which until then had been continuing. This abrupt change led, I sincerely believe, to Atmananda’s early death.

I wrote Dayama in protest, asking her why there was no money for our brothers who had worked so hard to keep this work alive, and why Dubey was responsible for all decisions in such matters now. She said she would do something about it. The next thing I knew, however, Sri Binay Dubey was made the Secretary of the Board, and nothing changed. I had a very strong talk with Dubey about his treatment of Atmanandaji, but my efforts did no good. Atmanandaji ended up staying with Tulsi Bose after he got out of the hospital. He passed away there on 17th February, 1963, having never recovered from his illness.

It was sometime later, in 1962, that Dubey told me quite smugly that SRF had telephoned Kriyanandaji at Surai Khet, a Himalayan foothill village where he was resting after his long and-as he imagined-victorious efforts to establish the work in New Delhi, and told him to come immediately to New York City. There he was met by two directors, Daya Mata and Tara Mata. To his intense agony, he was dismissed unconditionally from the work, being allowed to speak not a single word in his own defense, and with no explanation that he could even remotely accept as valid. He was warned never to contact any SRF member, either in America or in India, and never again to set foot on any SRF/YSS property. He was permitted to keep the little money he had with him, but was given no further allowance, and was left from that time on to rebuild his life as he chose. “Just take any job that comes along,” was the advice given him.

This was, in fact, the prelude for the great service to his guru that Kriyananda has accomplished since then, following the instructions Yogananda himself had given him. This service had seemed to him impossible to obey in the context of SRF. His dismissal, in other words, proved not the misfortune it seemed at the time, but a miraculous blessing on his life.

Chapter 12: No Tibet This Time