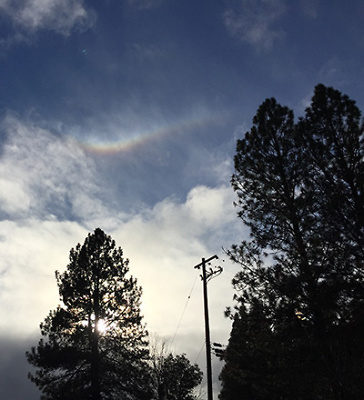 God can come to us in many ways—as an answer to a sincere prayer, as the warmth of deep friendship, as a sense of benediction in a sacred moment, and sometimes as the Divine Playmate, playing hide-n-seek, reminding us of Her presence.

So, was there a divine message, I wondered, when one day earlier this year, 15 feet up a utility pole repairing a phone service in my role as phone man at Ananda Village, I saw a rainbow in a beautiful blue summer sky?

A young friend had just happened by, and like me was struck by the luminous beauty of the rainbow pasted against a lone cloud in the still blue sky. When he questioned how a rainbow could appear in a storm-less sky, I explained it was an ice-crystal rainbow, and that I seen such a rainbow on two other occasions, both sacred. Within minutes the rainbow had vanished, but its lingering effect on us both was profound. To us both, it felt like Divine Mother’s smile.

I explained that the first appearance was Swami Kriyananda’s birthday celebration, some 30 years ago. The community had made a special effort to commemorate Swami’s 60th birthday in a very festive manner. Banquet tables were set up in the meadow at the Expanding Light, tucked up against the forest where at the time Swami gave outdoor talks in the Temple of Trees. Everyone was seated, served a sumptuous afternoon meal, and serenaded by the “Madrigal Singers,” a group in the community who sang Shakespearean songs that Swami had composed.

No sooner had the singing begun than a dramatic rainbow appeared in a small white puffy cloud in a still, blue sky. Word quickly spread from table to table, with occasional fingers pointing upward to have others take notice. The sense of divine benediction was palpable.

I believe I recall seeing Swamiji take out his camera to capture the moment. I, and most people at my table, had never seen an ice-crystal rainbow. Someone explained that the atmospheric conditions had to be just right, the sunlight had to shine on the cloud’s ice crystals at just the right angle, to make this magnificent rainbow appear. Occasionally, I, like the others, looked up in the sky to see the luminous rainbow still overhead, albeit at a different position in the sky, as the little cloud drifted slowly above. How had the rainbow remained as it drifted across the sky above?

As the meal was coming to a close, and the Madrigal Singers were finishing their last song, as though on cue, the vivid rainbow which had lasted about an hour, gently faded away. We all felt charmed by Divine Mother’s blessing.

The second appearance came in Swami’s later years when, to bless the proposed site of the new temple at Ananda, we had all gathered in the high meadow just below Rajarshi Ridge after Sunday Service. Again, it was a calm blue day. Just as the ceremony began, directly overhead appeared another ice-crystal rainbow, which lingered for the duration of the occasion. Again, Divine Mother’s blessing was palpable.

So why, I wondered, was this happening while I was strapped to the top of a utility pole? I had no idea, except that once again I felt Her blessing.

Months passed. This divine experience would surface, sometimes, in my memory; though I was touched, I kept wondering if there was any deeper significance, or if Divine Mother was just playing hide-n-seek.

Then one day the answer came: When the ice crystal rainbow first appeared, it did so in the Expanding Light meadow, at a distance from the main buildings, at a location to my knowledge never before or since used for any other occasion. The second instance was the consecration of the proposed temple site. Since that time, of course, Swami has passed on, and for various practical reasons, the proposed site for the temple has had to be changed.

Now, I’m sure of it. In a playful way, Divine Mother was indeed sending a message that day I was strapped in on top of the phone pole. I believe the rainbow up above was indeed Divine Mother’s smile, and Her smile that day has prompted this story of Her presence in our lives.

About the Author
Ric Moorhouse 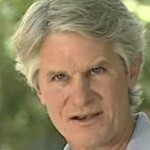