My path is devotional. After reading about Divine Mother in Autobiography of a Yogi, I had found my ticket to bliss. First I found love for Her through the trees, as I would walk to work through the streets of Los Angeles. Then, once I found Her in my own heart, accessible anytime anywhere, I understood that I needed no external thing to get to Her. Only remembrance of love for Her is always enough.

My other love is my guru, Yogananda, the author of the Autobiography of a Yogi book. That love, of course, has a different feel to it. I’m a little boy, Yogananda is the motherly and fatherly figure who is holding my hand on this journey. He is continually pointing to and showing me the infinite view ahead, towards our destination—forever in the arms of Divine Mother.

Yogananda’s guru’s guru’s guru is Babaji, the all-mystical, ageless and youthful master who lives in the Himalayas. Babaji, it is said, through the request of Jesus Christ, sent the soul-freeing technique of Kriya Yoga to the West and East, to set the stage for the ushering of the spiritual age for all humanity. Many many people in the East and the West, not just devotees of my path and line of gurus, follow and revere Babaji, as an avatar of God. Babaji, it is said, is an incarnation of Krishna.

To me, however, Babaji has always been so far out of reach, out of my realm entirely. So much so that I could not even make the slightest connection, or supplication, let alone muster a sincere devotion for him.

A month ago that changed. It changed through the most improbable means: by making an app.

I had been asked to develop Ananda’s first meditation app. After about 9 months of hard work (how appropriate I thought, as it did feel like quite a labor!) we were set to release the app on July 25, specifically chosen because it was the auspicious “Babaji Day.”

Just a few days before the release, during the last crunch time, all of a sudden I found every single thing breaking down. Things that had been working fine stopped working for obscure reasons. All kinds of bugs and problems surfaced, all right before we were about to release!

Out of pure desperation, I made a supplication to Babaji, knowing that we are releasing it on his day, to carry us through. This, perhaps, was my first earnest call to him.

The day before the release, miraculously and suddenly it felt, everything started to fall in place. One by one, I figured out the roots of each bug and cleared it away.

Then I understood… It wasn’t that things had all of a sudden broken, but they had been broken all along. The bugs had existed all along, but had just not surfaced during my development and testing, with the small-sample content that I was working with. A divine purification process had taken over, during those last few days, that accelerated the process of encountering and resolving many many existing issues!

That’s when I, for the first time, felt Babaji’s love. Not for me, but for the whole humanity. It wasn’t that we as excellent disciples had chosen to honor him by releasing the app on his day. He was the one who had orchestrated the whole thing from the start!

At once, I understood that this was his app, not mine, not Ananda’s. He had taken detailed interest in it. He wanted the teachings, which Yogananda had brought, to reach a broader new audience, perhaps younger generations, and those whose life didn’t allow them to be physically in spiritual centers, ashrams, or spiritual communities.

The app has received a 4.9 of 5 rating from those who have used it, which is quite rare for a one-developer kind of an app! Once again, I suspect he has everything to do with that.

I understood how Babaji, together with Christ, have taken charge of all of us souls, as the whole humanity. They are actively involved in this task, to carry us through this ascending age towards higher consciousness. If Babaji is involved in something as specific and small, like a meditation app, you can be sure he is involved in everything! What love is that! What love, which covers the entire human race, and still lacks nothing!

About the Author
Hesam 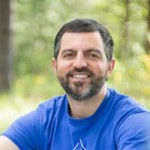