Note from the editor: May 22 marked the launch of a newly published original edition of the Autobiography of a Yogi in Italian. The event took place in Milan.

Swami Kriyananda addressed a full room of 500 avid listeners, after having given a number of magazine and television interviews the previous days, and a private donors’ dinner at the hotel.

The event seemed to be happening in an astral heaven, with every little detail full of brilliant light and colors: the flowers, the musicians, the choir, the new Autobiography and other books, including the Italian publication of the New Renunciate Order.

Entrance to the Hotel Brun where the launch took place

As people came into the hall, Ananda musicians were chanting Wave of the Sea (devotional chant by Yogananda), creating an uplifting atmosphere. Narya Tossetto, one of Ananda Europa leaders, introduced the evening. Then the choir sang songs in Italian and English, with Door of My Heart in Bengali as well.

Two well-known Italian authors spoke briefly about the importance of the Autobiography in their lives, and about Swami Kriyananda as a magnificent channel for Yogananda’s presence and love. A known television personality gave his testimony, and then there was a brief slide show of images and quotations from Yogananda.

Swami Kriyananda spoke for over an hour, most of it while standing, and the entire audience was rapt in their attention and wrapped in an aura of bliss.

It seemed that no one was breathing. Many in the audience were new to Ananda, and everyone left with light in their eyes. Swami Kriyananda told the story of his meeting with Yogananda and other stories, transmitting the experience that Yogananda is the nearest of the near and the dearest of the dear. 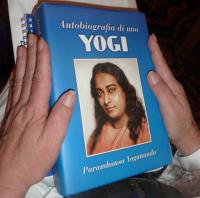 He urged people to get the book in its new translation of the original edition, the version which changed his own life and consciousness, and that of countless thousands, even millions, of other truth seekers.

A part of the success of the Autobiography, he said, actually traces back to him. In the early years, the book didn’t sell well. In fact it was offered to many publishers, but none of them were interested. Only the Philosophical Library press took it on. It did not sell well for them, so SRF, the organization Yogananda founded, was able to get the publishing rights back.

At this time Swami Kriyananda was in charge of correspondence and the Lessons, Yogananda’s home-study course. He noticed that most people dropped out after a year, and almost all, after two years. But those who stayed were those who had read the Autobiography. So he suggested that instead of promoting the Lessons, they should promote the book. His proposal was accepted, and from that time the book’s distribution began to grow.

Swami Kriyananda singing with the choir

To date, nearly the entire printing of 5000 Italian copies has been sold or placed in bookstores all over Italy through our distributor, which is the second or perhaps by now the largest, distributor in the country. We will be reprinting soon.

The talk will soon be posted on internet, in Italian of course. No translation is available at this time.

Swami Kriyananda then left for a few days of vacation, and then on May 27 he flies to Seville, Spain, where he will be joined by about devotees from Ananda Assisi and hundreds of Spanish devotees, to launch the Spanish translation of the original Autobiography.

He returns to Assisi on May 31, and after a few days of rest, goes on to Rome where on June 5 he will be one of the keynote speakers at the Rome Yoga Festival, speaking to hundreds, perhaps over a thousand people, in the vast park grounds of an ancient Roman Villa. After that, he will inaugurate the new Ananda Yoga and Meditation Center of Rome.

About the Author
Nayaswami Shivani