Sadhana Devi and I shifted last month to Gurgaon from Pune after being away since 2008. In our absence, the Ananda center/ ashram went through significant changes, making our return like coming back to a different place. Even Delhi seems to have changed for the better but my guess is that these transformations are more an outward projection of what has happened within me. I’ve changed. Our time in Pune, living in our own apartment, finding our way in a strange new city, working in the village with all the attendant challenges and making a new set of friends gave both Sadhana Devi and me a broader understanding of India and, perhaps, of ourselves. For that, I’m grateful. I was a little sad to leave Pune but now that I’m in Gurgaon, I realize this is a better place for us to serve and I like it. 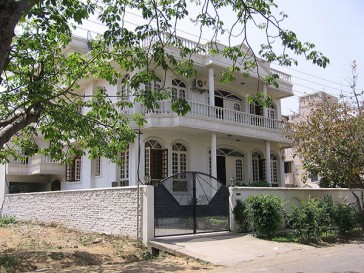 Front of the ashram

Over 25 Westerners were once part of our work in the Gurgaon when we left in 2008, Swamiji was in residence and the place was lively with projects. Now only five Westerners remain (Sadhana Devi, myself, Daya, Keshava, and Dhyana). The monks and Swami’s staff shifted to Pune and the rest headed home, leaving those who remain with a bigger teaching and organizational load. Our duties include not only Gurgaon but also functions in the entire NCR (National Capitol Region) where we have a vibrant center in Noida on the other side of Delhi and ongoing classes in the capitol itself.

Of the six houses once needed in our neighborhood, known as DLF Phase 1, only the ashram/center (also known as B10/8) and Guru Kripa (Swamiji’s home) remain with talk now of Guru Kripa possibly being sold to further the project in Pune. With so much downsizing, you would be forgiven to think our work in the NCR has regressed, but surprisingly, it hasn’t. That’s why we were called back. It’s simply changed. In fact, in some ways things are better here than ever though the live-in ashram population is definitely smaller. In the absence of the Americans and Europeans, local devotees have stepped up, a sign a the natural maturation of our work in India.

When the Westerners were here, we had at our disposal a large crew of volunteers willing to do whatever was necessary to plant seeds of Ananda’s work in India. On top of volunteering, they also paid for room and board, giving a tremendous boost to the ashram. Small businesses and outreach programs were started, a legal and financial structure put into place and we learned the ropes of living in a foreign land, but it was always with an intention of one day turning the work over to local devotees, replacing foreigners with locals. Little by little, this has happened much in the same way as it did in Italy. 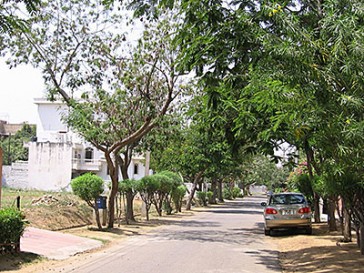 Street in front of the ashram

We now have an extended family of Indian devotees who participate regularly in the Gurgaon ashram with some leading classes and others helping with the day to day operations. Whereas the first Westerners were without family responsibilities, the same isn’t true for the Indians. Most are householders with children, so living in the ashram isn’t an option, but they treat Ananda as their spiritual home and come by for functions from the neighborhoods nearby.

The same is true for our group in Noida on the other side of Delhi, led by Mr. Gupta and his family. Since we left, they’ve grown into a strong Ananda Center with their own space in the basement of a residence in a quiet neighborhood, more central to where their members live than before. There, a solid core of devotees participates regularly with only occasional teaching help from those of us in Gurgaon. Most of the programs are presented by local teachers who have graduated from our Teacher Training Course. In central Delhi, Daya and Keshava lead weekly satsangs and classes in rented classroom space.

One of the most practical measures of commitment is financial. Are people willing to support a work that serves them? For Gurgaon, the answer has been “Yes!” The change over the last year has been revolutionary. In the first half of 2010, eight ashram members departed for homes in America and Europe, leaving a void in the Ananda Gurgaon’s aura and some questioning about whether we should move elsewhere because of our financial state. Up until then, the center had been running a significant monthly deficit and the gap between income and expenses seemed impossible to bridge.

We had few local, consistent contributors and our efforts to establish a steady fundraising effort always seemed to stall. Perhaps locals didn’t feel connected enough to contribute or perhaps they didn’t perceive a need. Or, maybe they simply weren’t asked in the right way. Whatever the case, something needed to change because with Swamiji shifting his focus to Los Angeles, donations from overseas dried up and it became essential for the Gurgaon Center to meet its monthly expenses without outside subsidies. The Gurgaon leadership took the following steps. 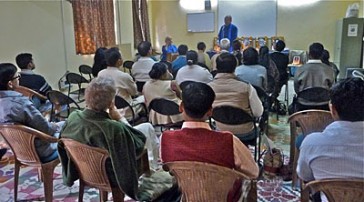 The changes had a dramatic effect upon the energy at the Center and our finances. The entire basement is now in use, open for devotees at all times. A new altar and murti (statue) of Babaji was installed and whereas before we had one class each weekend, we sometimes now have three or four, often led by local teachers, a weekly Gita Study Group on Thursday evenings and a Kriyaban Discussion Group on Fridays. If we could to attract students on weeknights, we’d do even more, but Indians rarely attend weeknight classes as they do in America. By God’s Grace, we are now paying all our bills and beginning to tithe to the larger work of Ananda India.

Ananda’s work in the NCR (National Capitol Region) still has a long way to go and we recognize our ability to reach people beyond the NCR has declined. We simply don’t have the teachers, time or funds to travel and host programs beyond our local area. The disciples in Pune do a good job in their city and travel to Mumbai and Bangalore, but there is much, much more we could do had we the necessary resources. For the moment, our focus in the NCR is to stabilize our foundation by building a larger core of Supporting Members. In time, this should allow us to hire one or two local staff to free up energy for us to reach out in a larger way. An Ananda Centers Department may be the next step in this direction, perhaps followed by new outreach programs in selected cities like we did in 2007/08.

As I mentioned, the possibility of Swamiji selling Guru Kripa is in the air. He is scheduled to return to India after the monsoon and I expect he’ll make a final decision then. It’s a very nice house and has the blessings of Swamiji’s years there, so some would like to see it preserved in the Ananda work. On the other hand, it represents a considerable asset that might be put to better use elsewhere. The house serves the Gurgaon group as an extra classroom, a meeting venue and as a place for guests. 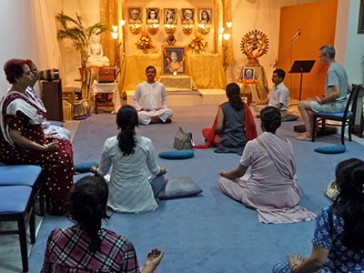 Of course, it also is where Swamiji, his staff and Nayaswami Dharmadas and Nirmala stay when they are here. If it is sold, we’ll be sad but at the same time, it may open the door for us to relocate to a building of our own rather than continuing to rent the present ashram house. With Guru Kripa in our possession, it’s difficult to consider moving but once those ties are broken, we might be able to do something “more and better” if we can rally our local support to help us. When one door closes, another opens.

We’d love to have you visit. The ashram has guest spaces available for those who might be passing through Delhi, so please come to see us if you can. I’d especially like to remind you of the short pilgrimages from Gurgaon to spots of interest in north India led by Daya and Keshava Taylor. They regularly visit Babaji’s cave and Rishikesh. In addition, groups go to Yogananda shrines in Kolkata and have recently visited Amritsar, Ladakh, and Badrinath. Most of the pilgrimages are of less than a week, making them easy to fit into local devotees schedules. Once you sign up, of course, you can then spend time with us in Gurgaon. Check out their nice webpage at www.anandapilgrimages.org.