First, a little background. In my second grade classroom, we actually practiced crawling under our school desks when the alarms sounded. We were told this action would protect us from an atomic bomb attack, which might be happening at any time (a lot of good that would have done).

And remember last year when the Winter Solstice (December 21, 2012) was due to be the end of the world because the Mayan calendar didn’t go any further? Remember Y2K2 in 2000 or so, when all computers were due to crash and cause the collapse of the modern world? Remember all the major planetary conjunctions which were certain to cause major disasters?

These are a few examples in a fairly long line of “frightening predictions,” which have happened during my lifetime. But I’m sure they’ve been going on, in one form or another, since there have been people on this planet. A solar eclipse happened and people cried out in fear: “The sun has died and we’re all doomed! Head for the hills!”

In the present moment, the US government’s recent shut-down and the increasing manifestations of global warming are certainly events to be noticed. We’ve all seen goverments collapse and people suffering under many types of political or religious persecution, all over the world. What does this mean?

All of my life, I’ve been waiting for some sort of cataclysm to happen, like the poles shifting, a nuclear holocaust, or a great financial depression, “…much greater than the 1930’s depression,” as Yogananda predicted.

Fortunately, no super-major cataclysms have happened yet, even though Paramhansa Yogananda and Swami Kriyananda both very often insisted that it would inevitably happen, sooner or later. I’ve gradually and happily come to terms with these sorts of dire predictions. And I’ll tell you how, at the close of this blog.

Meanwhile, a little less than a year ago (on Dec. 20), I was on my way home from work, thinking (a bit skeptically) that if the Mayan calendar predictions were correct, then this would be my last full day to be alive. As I drove along a beautiful part of Ananda Village (those of you who have been here will know it) called Sunset Ridge, I glanced over to my left across the beautiful hillside, in a northwest direction, where I saw this amazing sight in the sky: 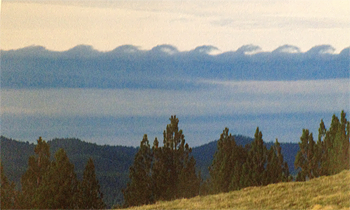 I immediately stopped the car, got out, rubbed my eyes a few times, and then looked more closely. Never, never, never had I seen anything like it! It looked like the clouds had shaped themselves into a sea monster’s finny back, or a group of sharks on the prowl, or an ocean scene, complete with regularly breaking waves.

Wow! I had often thought that if the San Andreas Fault ever gave way and all the area from Los Angeles to San Francisco fell into the sea (as has often been predicted) that Ananda Village would suddenly have prime sea-front property! So I now thought: “Has this just happened?”

I was near Vasanta Weber’s office, so I ran there to see if he was in. He was having a business chat with a delivery man and I can imagine what they both first thought. Here’s this wild-eyed woman bursting into their presence shouting: “You’ve got to come outside and see this and bring a camera!”

But they were good sports and did just as I asked (cell-phone cameras are handy that way). They, too, were amazed and exclaimed that they had never seen anything like it either. Thank God for their collaboration!

So we stood around watching for a while. Then, as clouds do, the formation began to break up and blow away.

The next day Vasanta e-mailed me the above photo he had taken (he’s an excellent photographer—thank you Vasanta!). He also he took photo of another “friendly observer” (Brother Coyote) who had been out there on the hillside with us, watching the magical sky scene. In my excitement, I hadn’t noticed, but Vasanta did and also caught that moment with his camera. 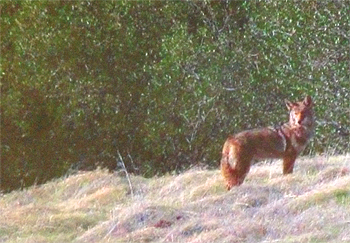 December 21 (the next day) came and went, and nothing else unusual happened; the world didn’t end. In time, the rational side of me took over, so I started doing some research on “today’s source of all knowledge,” alias the internet, to see if what I had seen, and Vasanta had photographed, had ever been seen before.

I googled: “unusual cloud formations.” By the way, I’d recommend that you take the time to do the same thing. The photos of unusual, I mean really unusual clouds, shown on these various sites, are great fun!

It didn’t take me long to find examples of photographs similar to what I had seen—my “special sign in the sky.” They even have an odd-sounding name—“Kelvin-Helmholz wave clouds”—no doubt named after Mr. or Ms. Kelvin and Helmholz, whoever they are. And even though these sorts of cloud formations are quite rare, they have a completely rational and scientific explanation of what causes them (Darn!).

Now back to those predictions about disaster. I used to worry a lot about them. I’ve even done my share of disaster preparation, including food-storage, learning gardening and plant identification skills, growing and using medicinal herbs, and moving away from the city into an intentional, spiritual community.

Eventually I began to understand, through my meditations and deepening spiritual life, that though these preparations may be a very good thing to do, my main preparation must be on an inner level. That has been my primary focus in recent years. Come what may, I feel ready, at least inwardly.

Outwardly, if worlds collide or continents sink, or we all become poorer than church mice, I know that God and Gurus are with us and all will be well, one way or another. And even if things aren’t going so great, we still get the opportunity to work off a bit more karma and move on to new horizons. And that is a good thing, for sure! Onward and upward into freedom’s skies!

These crazy clouds that look like a row of crashing waves are known as Kelvin-Helmholz waves. They form when two layers of air or liquid of different densities move past each other at different speeds, creating shearing at the boundary. It could be like oil and vinegar. In the ocean, the top is warm and the bottom is really cold. It’s like a thin layer of oil on a big puddle of water. When these two layers move past each other, a Kelvin-Helmholz instability is formed that is sort of like a wave. Parts of the boundary move up and parts move down. Because one layer is moving faster than the other, the shear causes the tops of the waves to move horizontally, forming what looks like an ocean wave crashing on the beach. It really is looks like a ‘freeze-frame’ of breaking waves. A wave breaks when the water on top moves so much faster than the water below that it kind of piles up on itself.