The drama began when my husband, Brian, phoned his longtime friend Andrew, whom he hadn’t heard from for awhile. Andrew sounded very strange on the phone, and Brian could tell something was wrong. Andrew offered no explanation and didn’t invite us to visit, but Brian and I knew we had to make the 45-minute drive to find out what was going on.

Andrew had always been a radical thinker and distrustful of the “establishment, ” but if he considered you a friend, his love and loyalty were absolute. Brian and Andrew had been friends since the early 1970s. They shared many interests: vintage German cars; Japanese art, swords, and armor; and high-end “hi fi” equipment. Andrew had a modest collection of each in his small home on the California coast.

Andrew made his living repairing and rebuilding German motor vehicles, including motorcycles. Twenty or so years earlier, while test-driving a motorcycle he’d repaired, he hit an obstruction in the road. After three weeks in a coma, he regained consciousness and found himself in a hospital bed, imprisoned in a body cast, in great pain with a broken back, and sporting a turban of bandages.

Andrew survived the accident, but that quarter mile test drive began a karmic avalanche that intensified through the ensuing years. His life was now filled with physical pain, surgeries, seizures, and the constantly changing side effects from a plethora of medications  — both physician-recommended and self-prescribed. Most recently, he’d added prednisone for his newly diagnosed emphysema.

Due to his injuries and pain, Andrew could work only on average a few hours a day, and had been forced to accept public assistance. His overall medical condition was extremely complex but when doctor after doctor couldn’t “fix” his numerous problems, he became distrustful. Still, up to the night we went unannounced to his house, it was hard to tell whether he had developed a sort of paranoia or whether he was simply angry about what life had dealt him. Andrew was constantly on the edge financially, but he owned his house. So as long as he could make the payments, he had the security of knowing that he would have a place to live.

A bizarre and frightening scene

We arrived at his house in the early evening. When our continuous knocking on the door drew no response, Brian slowly turned the knob and pushed the door open. Andrew was sitting at his desk, which he’d pushed up against the windows so that it overlooked the front yard and street. A bizarre and frightening scene began to unfold.

Sitting on the edge of his chair behind the desk, Andrew was intensely focused on some invisible menace. On the desktop lay an unsheathed two-foot long Japanese sword. These swords, with their extremely sharp handmade blades, are legendary for their deadliness. Andrew’s hand, which rested next to the sword, was clutching a handgun.

With a quick glance we noted another handgun stuffed into his boot, and another, smaller sword tucked into his belt. Andrew was surveying the world out the window . . . waiting for the police to arrive. He “knew” they intended to take him away from the only security he had, his house. We later learned that Andrew was suffering from “prednisone psychosis,” brought on by the new medication, and it played on his greatest fears.

Ready to fight it out

A sincere truth-seeker, Andrew was familiar with meditation and had explored the Buddhist path. Nonetheless, in his current state of medication-induced psychosis, he was armed and ready to fight it out with anyone who dared cross the threshold. Brian told me to wait on the porch, so I sat out there with Andrew’s large German Shepherd dog.

Andrew rose and paced, patrolling the various windows. He came back to the chair and sat just inside the front door. Brian lowered himself gently onto one knee very close to him. He said, “Andrew?”

Andrew looked at Brian blankly, then with some recognition, but he quickly turned back to looking out the window, with his handgun pointed in readiness. Brian put his hand gently on top of the hand holding the gun, hoping to keep it pointing harmlessly away from him as he tried to make contact with a rational portion of Andrew’s mind. He spoke to him calmly, asking what was happening.

Andrew explained that “they” were coming to take his house away. He’d been up for nearly three days without sleep. As if on cue, he abruptly rose and strode back to the kitchen. He thrust his hand into his coffee grinder, grabbed a fistful of coffee grounds, palmed them into his mouth, and returned to his post. He didn’t want to fall asleep and lose control of the situation.

Brian asked if he’d eaten anything. “No,” said Andrew, “not for a couple of days.” Brian asked that I go to the grocery to get some food to cook for him. I was terrified. Andrew’s lucidity seemed to ebb and flow. In an instant Brian could be misconstrued as the enemy — and killed.

“Master, you HAVE to be there!”

I was shaking, my heart racing, as I left the house and got in our van. Though I had been praying on the porch, I had been too panic-stricken to pray with real intensity. Now, as I drove to the local grocery store, I pounded on the steering wheel and shouted out loud to my guru, Paramhansa Yogananda, “Master, you HAVE to be there! You have to protect Brian. You MUST be in that room with them. Don’t let any harm come to Brian or Andrew. You must clear Andrew’s mind! You have to stop this! MASTER, YOU HAVE TO BE THERE!”

I shouted my prayers to Master again and again, all the way to the local grocery store. My prayers held my fear at bay, but just barely — the fear that Brian could be dead when I returned. While making the purchases, I continued my prayer demands mentally. Driving back to the house, I again shouted out loud, demanding that Master be there with Brian and Andrew, and that he surround them in God’s protection.

When I arrived, the dog was still on the porch, and obviously distressed. I approached the door quietly. Listening at the door, at first I didn’t hear anything. Then I heard what sounded like it might be the television. I knocked and waited, then turned the knob and slowly opened the door. I saw a gun lying on the desktop, and the television was on.

Cautiously, I surveyed the scene. On every flat surface there was a different weapon – a knife, a sword, a gun, another sword, all randomly placed. Brian sat on the couch looking watchful but relatively relaxed. Andrew sat in his favorite recliner looking very peaceful.

I entered the room holding my small bag of groceries and tentatively asked, “How is everyone?” Andrew said his familiar, “Hiya,” and asked what was in the bag. I walked toward the kitchen, forced a smile, and tried to sound cheerful when I said, “I brought dinner.” Inside I was still shaking, partly from fear and partly from the strong energies that surged through me. Andrew said, “It’s nice to see you guys.” I told him he looked well. Softly he said, “I feel like I’ve been meditating.”

It was apparent that he was in a very uplifted state. Brian and I made sure that he ate, and we ate a few bites with him. We put the weapons in a cupboard in the back room, and visited for another hour or so.

Everything began to change

As we were driving home, Brian began to describe what had happened after I left for the store. He described it as “extraordinary!” There was a moment when everything began to change.

It was as though Andrew’s craziness began to drain out of him. Without saying a word, his face and eyes softened and a benign expression replaced the “soldier guarding his home turf” look. He seemed to be “in between” experiences – not paranoid, but not quite himself, either. He set the gun down, got up out of his chair, and walked across the living room, slowing disarming himself. He pulled the sword out of his belt, a knife and gun out of the top of his boots, another gun out of his pocket, setting them down in different places, but seemingly not really aware of what he was doing.

When Andrew sat down again he seemed to notice Brian for the first time. They turned on the TV and were just sitting there as though nothing had happened. It was apparent that Andrew had no awareness of what had happened. Apparently the prayers had cleared Andrew’s mind of the psychosis, brought him up to a higher octave of his being, and transformed him back into the gentle man whose heart had a place for every one of his friends.

The next day Brian called Andrew’s physician and described the events of the previous evening. That’s when we first heard the term – prednisone psychosis. Though Andrew continues to live a very challenging life, in these past 15 years we haven’t known him to have another incident of paranoia or psychosis.

Now I pray with intensity

My experience with Andrew taught me much about the power of prayer. Previously, my prayers weren’t very energetic. I went through the motions, prayed for specific outcomes, always adding fatalistically at the end, “if it be Your will.” Now I pray with intensity, with my energy strongly focused at the spiritual eye and my heart fully engaged, so that I feel “plugged in” to God’s loving energy.

Praying in this way deepens my faith and my sense of being an active participant in the unfolding drama of creation. This shift in understanding and practice has been Andrew’s gift to me.

Tyagini Lisa Powers is a Lightbearer and longtime Ananda Member. She lives at Ananda Village where she serves as Director of Member Services. Clarity Magazine articles can be printed in "text only" format, using your own computer.

About the Author
Tyagi Lisa Powers 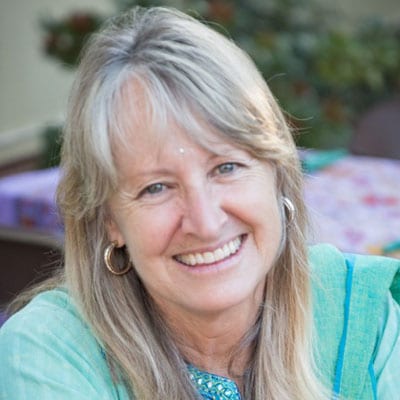 Nayaswami Indradevi currently lives at Ananda Village and serves with the Care & Aging Ministry. In her first week of college she read Autobiography of a Yogi and found her guru. Seven years later, in 1980, she found Ananda, came to the Ananda Meditation Retreat, and discovered the life shed been looking for.
Read more