Action without desire for the fruits of action. (1)

According to the Bhagavad Gita, no being can escape karma by refraining from action. Instead, one may practice nishkam karma, or action without desire. If one is not attached to the consequences of his actions, then one will gradually and ultimately free oneself from the bondage of karma. (2) Otherwise one may attract what he desires in life even if it is disastrous. (3)

In Essence of Self-Realization, Yogananda explains the core attitude of nishkam karma:

“During activity, never feel that it is you who are acting. Act, instead, with the thought that God is the Doer. Pray to Him, ‘Lord, Thou art acting through me.’

“Even when you make mistakes, make Him responsible for them. He likes that! Of course, you mustn’t deliberately do wrong and then lay the blame on Him! But if you do your best but still fail, give your failure to Him. Cling to the thought that you are ever free in your Self. This is the way to final freedom in the Lord.

“Of course, other things are involved, too: devotion, meditation, divine grace, and so on. But as far as action is concerned, desireless action is the pathway to freedom.” (2) 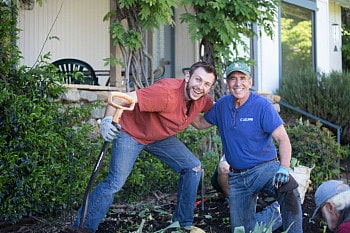 Swami Kriyananda writes of the relationship between nishkam karma and karma yoga. Karma yoga, which involves the redirection of all behaviors and energies upward toward God, consists of the practice of non-attachment to the fruits of action. (4) This type of action no longer brings up karmic likes and dislikes, leading instead to yoga or union with divine nature. (5) To quote further:

The term karma yoga means “to behave in such a way as to direct our energies Godward.” The classic teaching regarding karma yoga is found in the Bhagavad Gita: nishkam karma (“action without desire for the fruits of action”). People who say “I am practicing karma yoga” to excuse the fact that they don’t meditate, when in fact they may be busily engaged in amassing a fortune, are practicing karma all right, but not karma yoga.

Karma yoga intends to cut the bonds of ego involvement by acting out, in the right way, impulses that were set into motion in the wrong way in the past. Spiritually harmful impulses can be redirected into constructive tendencies. Avarice, for example, can be overcome by practicing generosity. The wish to harm others can be purified by serving them selflessly.

Try, when practicing karma yoga, to see God, rather than your little ego, as the Doer. It is easier to transform good than bad karma into spiritual awareness—easier, for example, for a generous person than for a miser to develop an expansive consciousness—but the more one realizes that self-fulfillment is the equivalent of self-expansion, the more clearly one feels motivated to expand one’s sense of self to infinity.

Perfection in karma yoga leads to transmuting the impulse to act at all from ego-consciousness. The consequence of this transmutation is superconsciousness, and perfect inner stillness.(4)

An attitude of nishkam karma is even necessary in meditation. “Do not be anxious if you don’t have meditative experiences,” Yogananda said. “The path to God is not a circus! Don’t even be anxious about such fruits of meditation as inner joy and peace. Everything will come in God’s time. Meanwhile, consider meditation, too, as a form of Karma Yoga: action without desire for the fruits of action. Meditate above all to please God, not yourself.” (6)

Members of Ananda Village write about the importance of nishkam karma in their lives. For example, Sadhana Devi Helin mentions the practice of conscientiousness in members’ actions and their attitude of leaving the outcome in God’s hands. (7) Similarly, Ananta speaks about the need to balance high ideals with practical realities without losing touch with God. (8)