Many of us have enjoyed dining at the Olive Garden, a restaurant chain that serves traditional Mediterranean cuisine, but how many of us in Ananda Village know that we have our very own olive garden? 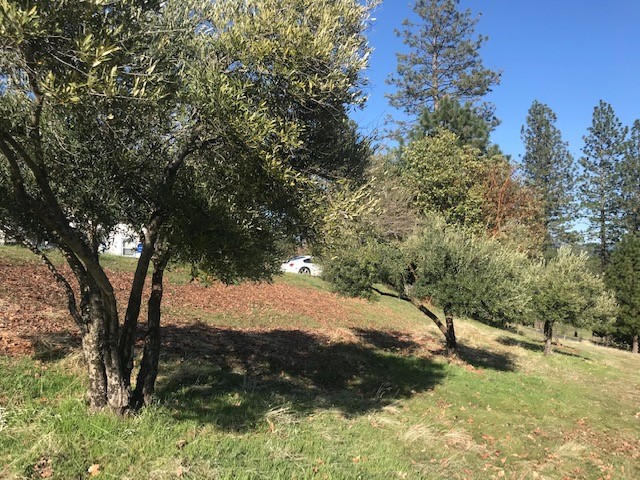 Go over to Rajarshi Park sometime where the Ananda Sangha headquarters are located. Look down the hill on the southern slope and you will see a  small grove of nine majestic olive trees. This olive garden was planted some 20 years ago and reminds me of being on pilgrimage in Spain, Greece, Italy, or in the Holy Land where olives flourish in abundance.

During the first Ananda pilgrimage to Israel in 1986, I was strongly attracted to “the sacred olive trees,” as Paramhansa Yogananda describes them in Autobiography of a Yogi. These sacred evergreen trees grow throughout the Mediteranean and stand on the hillsides of Assisi (where I lived for seven years), of the Holy Land, and now at Ananda Village.

I can only imagine what Master must have thought when he admired the ancient olive trees in the Garden of Gethsemane during his visit to Israel in 1935. Those ancient trees have been around for more than 2000 years since the time of Jesus. If only we could listen to their silent whispers, we might hear untold stories about the life of Jesus Christ and his direct disciples. I am certain those sacred olive trees could tell us many marvelous stories! I  can only wonder what our Ananda olive trees will look like and convey a thousand years from now.

Olea Europea is the Latin name for “sacred olive tree.” There are 134 varieties, or cultivars, in 23 different countries around the world, including the continents of Europe, Asia, Africa, North America, and South America that generate 85 percent of the world’s olive oil and fruit production.

Paramhansaji brought plaques of olive wood carvings from the Holy land as gifts for his disciples at Mount Washington when he returned from India in 1936. Guruji was very fond of olive oil and referred to it in his Praecepta Lessons as “very good…the most valuable of vegetable fats!” I think Master would encourage us today to consume extra virgin olive oil and eat the cured olive fruit for dietary balance in our vegetarian and vegan diets.

Many doctors today recommend taking a tablespoon of extra virgin olive oil first thing in the morning to flush out the liver. In the Praecepta Lessons, Master also encouraged people with wrinkled or dry skin to use olive oil.

A dry skin wrinkles faster than that which is well lubricated. Oil, particularly olive oil, as an aid to skin beauty, has been used throughout the ages. It is chronicled that chief among Cleopatra’s secrets of beauty and rejuvenation was the generous use of oil of the olive. Secure a good brand of yellow olive oil… Sensitive-skinned people should protect their skins by smearing olive oil, or something similar, over their bodies before taking a sunbath.

A few years ago, Nayaswami Maria picked and cured 100 pounds of Ananda olives. They are so delicious! She gave me a jar and someday I hope to share her recipe and process for curing olives. 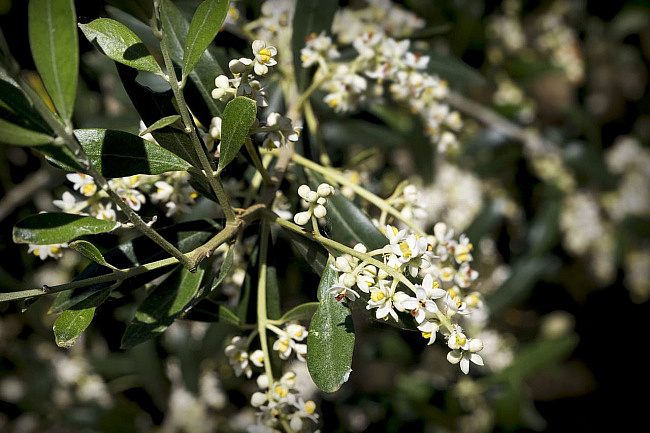 At this time, we do not have a lot of olive trees in our grove but the hope is that we will be able to plant a lot more of the trees when drought is not such a factor. We currently have eight mature trees that are bearing fruit. They are all in different stages of development. These trees are of the Manzanillo variety that can withstand cold climates and can be used for their oil and fruit. Our trees bloom in the spring and summer and have lovely tiny white blossoms. In the late fall, they are ready to harvest.

I am often asked about how our olive trees were originally chosen and planted. “Aren’t we too high in elevation for them to grow?” “Can the fruit be picked before the first freeze?” Here’s the story:

21 years ago, at the turn of the 2nd millennium, Ram was experiencing some nostalgia for his adopted homeland in Italy, where he had lived for seven years during the founding of Ananda Assisi. As a result, he started visualizing a large olive grove at Ananda on the southern slope of Rajarshi Park.

In 1978, he recalled seeing an organic farm off of Hwy 49, in Sweetland that old Mr. Ilgner had been operating for years that had an olive grove. Mr. Ilgner was a friend of Ananda Farm who occasionally consulted with us often about organic gardening in our Sierra Foothills climate zone. After Mr. Ilgner’s passing, Ram approached the new owners of his farm about purchasing some of the mature olive trees that were growing there. The new owners agreed to $100 a tree with the understanding that we would do all of the labor – digging up the trees, transporting them to the Village, digging the holes at Rajarshi Park and transplanting them. It was a very big job but we did not have the $600 to pay for the trees. In fact, we were broke but Divine Mother gave us a plan.

So…Tim joined Ram in driving Tim’s truck down to the Ananda Community in Palo Alto in order to pick olives that grew on the trees planted in the early 1900s in the surrounding the community. These trees were bigger than the two-story apartment buildings that stood behind them.

We had received permission from various home-owners and apartment managers to pick the olives. They saw these giant trees not only as worthless but as a nuisance that dirtied carpets and floors with their oily mess. Chittenbar (Rick) from Ananda Palo Alto, also helped them to pick and fill over ten large trash bins with ripe olives that added up to some 1500 pounds! We sold the entire truckload to an olive processing plant in Orland, CA, outside Chico on Hwy 5 and were paid $700 for the load. 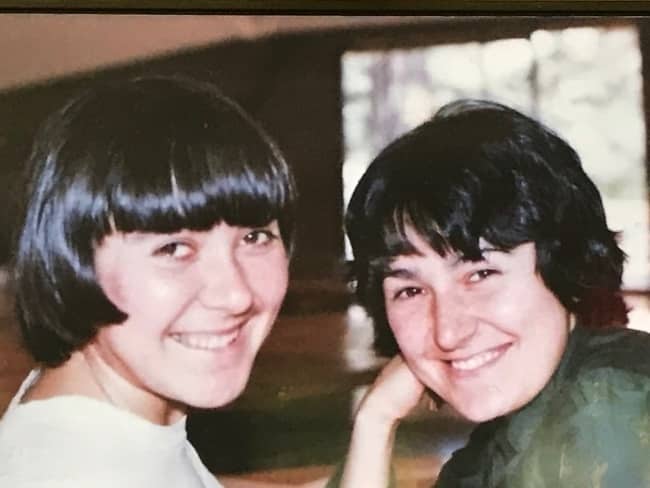 We did it! We now were loaded with the much-needed cash.  Divine Mother had worked it out. We bought six olive trees from Mr. Ilgner’s organic farm and transplanted them to Rajarshi Park. Prakash also helped us out with his backhoe. Tim ended up bartering for three additional trees and filled out our little grove with nine trees total. We planted one of the trees in the name of one of our dear gurubhais, Bella, who passed away around that time. Bella is the beautiful soul who designed and constructed the magnificent Shiva statue in the Chandi Cluster.

There is a lot of energy to grow our Ananda olive garden. One day Swamiji said to me in passing that he was very pleased with the development of the olive garden. Binay and Lina planted 34 trees at their home. Niranjana is currently planting 108 olive trees on her land near Ananda. There’s also an anonymous donor who wants to see more olive trees grown in the Village. Just imagine seeing the entire hillside covered in olive trees from Rajarshi Park up to Master’s Shrine on the hill. It looks like we could have our own Mount of Olives here one day and, just like in the Holy Land, the sacred olive trees will bear witness and honor our legacy. 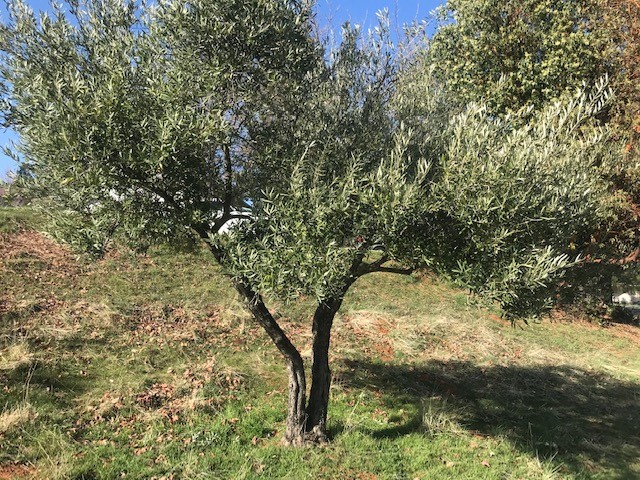 One of the 9 trees originally planted in the Ananda olive garden.