Music that is specially written to uplift one’s consciousness can serve both as relaxing meditation music and as a way to attune to divine qualities. Such music (meditation songs) as this article explains, can be simple and effective aids to meditation.

Paramhansa Yogananda describes meditation simply as “concentration on God or one of His attributes”—namely Light, Sound, Peace, Calmness, Love, Joy, Power, and Wisdom. This list  may be extended to include similar variations such as compassion, contentment, self-expansion, energy, etc. Swami Kriyananda’s book Affirmations for Self-Healing presents 52 such qualities.

In meditation, concentration on pure or abstract qualities can be very challenging. These aspects, in essence, are subtle feelings that we perceive through intuition rather than with the physical senses.

However, we can use external stimuli to evoke and attune to those feelings. For example, many meditators enjoy the uplifting influence of incense and place inspirational images in their living and meditation spaces. A special sanctuary, temple, or room dedicated to meditation and devotional practices has a very helpful and uplifting influence on us. 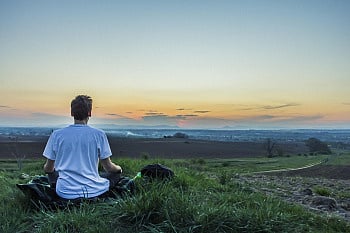 The Unique Effects of Music

Music is another powerful influence. Music or meditation songs composed from spiritually uplifting states of consciousness are perhaps the most effective influence on one’s mental state for the following reasons:

The effectiveness of music is perhaps one reason why Yogananda said that chanting is “half the battle.” Chanting is the practice of singing devotional or meditation songs before and during meditation. The battle here is between the restless, outwardly-directed mind that wants to be engaged in the physical world and the inwardly-focused soul that wants to meditate and concentrate on God. In meditation, we endeavor to withdraw the senses, focus the mind, and absorb the divine qualities. (See also: What Type of Music Should You Listen to While Meditating? and Meditation on AUM.)

Yogananda taught a specific method of chanting that is more effective than the outward singing of songs or hymns. Yogananda’s instructions were given in the following steps:

This progression helps the chant penetrate into every part of your consciousness. You may find that it remains in the background of your mind throughout the remainder of your meditation and perhaps long after you resume outward activity. The chant acts as a magnetic vortex of devotion, a true meditation song, drawing in the energy of random thoughts that may arise in the mind during meditation or at any time throughout the day.

This method of chanting is the same that Yogananda taught for spoken affirmations. Sri Yukteswar, Yogananda’s guru, specifically referred to these chants as “chant affirmations.” He probably did so to distinguish these affirmations from the many Hindu devotional chants that only repeat the name of God or a saint.

A little-known feature of Yogananda’s chants is that the original 1938 publication of Cosmic Chants (public domain) included a page, “When to Use These Songs.” Yogananda assigned each song a specific spiritual, psychological, and emotional need that the song could address. Although that list isn’t included in the current versions of Cosmic Chants, you can find them on When to Use Cosmic Chants (with commentary by Mary Kretzmann). Yogananda is saying with these assignments, that each chant or meditation song has a specific quality of consciousness – a certain positive power that dispels specific lower states of consciousness.

Clearly, such a positive influence can help with concentration during meditation because negative emotions and negative states of consciousness impair concentration. For example, if you are frustrated that your meditations are dry or that God does not seem to be responding, try chanting “I Will Never Forget Thee” (also known as “Listen, Listen, Listen”).  Yogananda recommends this as an antidote to sing “when feeling far away from God, to strengthen the inner tie with Him.”

Notice also how the various chants specifically address those aspects of God previously mentioned: “What Lightning Flash” (Light), “Thousands of Suns” (Wisdom), and “Blue Lotus Feet” (Love), along with “Thou Art My Life” (Love)  to sweeten a sour disposition.

Some chants have very practical qualities, like “Polestar of My Life.” Yogananda recommends singing this song “when experiencing failure in business or failure in trying to contact God.” For the full list of songs from Cosmic Chants and when to use them, see “When to Use These Songs.”

In addition to Yogananda’s chants, there are 400 or so pieces collectively known as Ananda Music. Most of this music was composed by Swami Kriyananda, Ananda’s Founder. This music can evoke specific feelings appropriate for meditation. Kriyananda once said that “every piece of this music has come from rising energy in the spine.” This means that every piece was written from a dynamic sense of an upwards flow of energy toward higher consciousness, toward God, or simply toward the Higher Self.

Popular music is generally written for worldly purposes – to blow off steam or voice one’s feelings, stimulate the emotions (often negative emotions) or excite the senses (often provocatively). Popular music often pulls the inner energy downward in the astral spine – into lower states of consciousness or it may scatter that energy into restless expectations of material fulfillment.

In contrast, Ananda Music is written to bring the energy inward into the astral spine and direct that energy upwards. Every piece of music is a true meditation song. Many pieces of Ananda Music start by resonating with familiar energies in the middle and even lower centers of the spine and then bring those energies up to the higher centers. Most of the pieces—including lyrical songs and instrumental pieces alike – end by directing the focus to the spiritual eye – the very place we want to concentrate during meditation.

You don’t have to think about all of these components or understand them because these effects naturally come through the music. You can simply relax and feel them.

From the title of the song “Peace,” you can infer the feeling and vibration of that song.

Peace, as well as calmness, relaxation, and assurance, are evoked. “Peace” is a good example of meditation music. There is also an instrumental variation called Inner Peace. Similarly, a song like “The Secret of Laughter” (audio below) carries feelings of lightness, joy, freedom, contentment, and simplicity. Stronger songs like “Go On Alone,” “Brave Were the People,” and “A New Tomorrow” carry vibrations of power and energy, along with enthusiasm, courage, moral vigor, and centeredness.

From the few songs mentioned, you can determine that each piece of Ananda Music is distinctive. Each piece of music evokes specific feelings and states of consciousness through a combination of melody, harmony, rhythm, lyrics, and tempo that resonate with the energy centers in the astral spine.

You can easily find a select group of songs from Ananda Music that evoke the particular emotional states you would most like to experience.

Each one of these songs is an antidote for one or more negative emotions. -Swami Kriyananda

In other words, the unique consciousness and positive qualities of the songs have the ability to counteract lower emotional states that are often impediments to concentration and meditation.

What negative states might the song “Peace” address?  You can think of a number of opposing states including agitation, anxiety, restlessness, and tension. Similarly, the lightness and joy of “The Secret of Laughter” counteracts depression, discontentment, and self-involvement, along with envy and jealousy.

Kriyananda assigned songs for each aphorism in his book Secrets of Emotional Healing. A summary of those assignments is provided – Antidote Songs and Ananda Music Song List.  I consulted with Kriyananda on antidote assignments for a few songs. Over the years, I have continued the work of assigning antidote qualities to the full body of Ananda Music and hope to share more broadly the results of this work.

What I find especially effective about these antidotes is that when you are mired in negative emotions or states of consciousness, it is easy to identify the problem but it may be difficult to identify a positive counterpart. For example, when you are angry, it may not occur to you that the most powerful antidote may not be calmness. The best antidote and counterpart to your feelings of anger might be in giving up your expectations or desires about someone else’s behavior or events in the world. A song like “Go On Alone,” draws you from outer expectations into your own center. It is an antidote for negative and angry feelings that can reverse your emotional state in a matter of minutes, if not seconds.

“Wrath springs only from thwarted desires. I do not expect anything from others, so their actions cannot be in opposition to wishes of mine.” – Swami Sri Yukteswar

How can we use these meditation songs most effectively? Simply listen to a recording of an appropriate song or chant, or sing it yourself to attune to certain divine qualities. Most of the meditation songs or audiations are only a few minutes in length.

Another key to using the songs effectively is to focus attention on the underlying vibration or feeling of the music. In this instance, you are not listening to recordings or singing songs for entertainment. You are also not analyzing the music or the lyrics but are trying to feel the underlying quality of the music. Feel how the music resonates in your body and especially in your astral spine. Let that energy and consciousness – that feeling, pervade your awareness.

For example, when listening to “Peace” there is no need to figure out what the poetic lyrics are saying. Instead, let the music establish an upward sense of peace and calmness within you. When the song is done, try to stay in silence as long as you can with your awareness focused on those feelings of peace and calmness. Essentially, you may find yourself meditating in the truest sense of the word—concentrating on God or one of his attributes.

About the Author
Satyaki 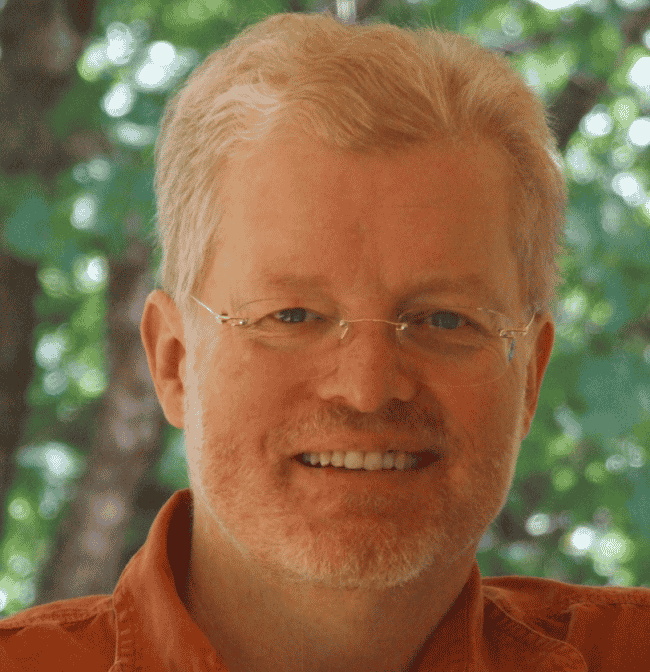 Satyaki (Kraig) Brockschmidt joined Ananda in Seattle in 1996 and served there in many capacities until moving to the Portland Community in 2004 and then to Ananda Village in 2011. From early on, his love of Ananda Music has had him singing in choirs and as a soloist. He also directed the Portland choir for several years. Since 1998, he has deeply explored Swami Kriyananda’s concept of “music antidotes” and how music affects consciousness. Satyaki worked as a Program Manager and Content Developer for 22 years at Microsoft, during which time he wrote several books and gave many talks on some of Microsoft’s key technologies. In addition to his technical works, he is author of ‘The Harmonium Handbook’ and ‘Solving Stress,’ both published by Crystal Clarity, along with a memoir of his early tech career, ‘Mystic Microsoft: A Journey of Transformation in the Halls of High Technology.’