I have read from Gurus Sai Baba, Sitaramdass Omkarnath and Haidakhan Babaji that we are in Kali Yuga and the greatest practice for liberation in this Kali Yuga is naam japa. I know this differs to what Paramahansa Yogananda says about us being in Dwapara Yuga. Why the difference of opinion between such great masters ? Did Paramhansa Yogananda ever say naam japa alone can liberate us, even if we are in Dwapara Yuga?

“In India, the presently accepted tradition is that we still live in Kali Yuga, the dark age. According to this conventional reading of the texts—a reading dismissed with cool logic by Sri Yukteswar—mankind is, relatively speaking, not much past the beginning of Kali Yuga, and is destined to sink ever more deeply into the swamp of ignorance and moral degradation that is the product of this age…. Things, according to that interpretation, will continue to worsen for another 427,000 years. At that point, some believe, the world will be annihilated, whereas others believe that Satya Yuga, the spiritual age, will reappear and will initiate once again the eternal process of descent from Edenic idyll to stygian disaster…. [Sri Yukteswar] claimed that a serious flaw had crept into the reckoning, several centuries ago, of the much more ancient yuga system. The flaw itself, he said, was a product of Kali Yuga’s gift of ignorance to mankind. The true duration of Kali Yuga, and of each of the other ages, is, Sri Yukteswar proclaimed, far briefer than those impossibly long time spans allotted to them conventionally. Instead of 432,000 years in all for Kali Yuga, that age lasts only 1,200 years. In the year 1600 A.D., the earth began to come out of Kali Yuga, and completed its emergence a hundred years later, in the year 1700 A.D. As the night stars pale before the slowly coming dawn, so the final century of Kali Yuga saw the weakening of those rays before the approach of Dwapara Yuga, the age of energy. In 1700 A.D. we experienced the first roseate clouds, so to speak, of Dwapara…. In 1900 A.D., what we might call the sun of Dwapara Yuga proper rose above the horizon. The age of energy had begun.”

Why is there is a difference of opinion among various Masters and Gurus? Of course, that could be said about this topic and about many other topics also. Spiritual teachings often are interpreted or presented in different ways, according to the needs of its listeners or readers. 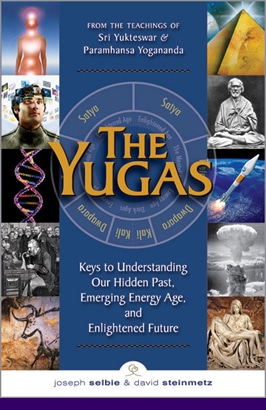 In truth, it is a matter of deciding which path or Master/Guru you personally choose to follow and then accepting the teachings of that path wholeheartedly, because of your loyalty to your chosen path and its designated teachers.

I have studied various theories about the Yugas and aside from my loyalty to my path and gurus, Sri Yukteswar’s explanations of where we are now in the Yuga Cycle make much more sense to me than any other explanations that I have come across.

One of the very best books available about this topic is: The Yugas by David Steinmetz and Joseph Selbie. It is also available on Amazon. I highly recommend that you read it. It sheds much light on your particular question and on the whole fascinating topic of the Yugas.

Regarding the practice of naam japa, or the repetition of God’s name(s), it certainly is an inspiring practice, no matter in which yuga you are living. However, Paramhansa Yogananda explained that the meditation techniques of Kriya Yoga are extremely suitable for this present age of Dwapara Yuga and are powerful in their ability to lead us to liberation and freedom in God, as quickly as possible.