Yogananda said that Babaji, Lahiri and Sri Yukteswar were the three Magi who later were Jesus' spiritual teachers during his "lost years" in India. In the 19th century Jesus asked Babaji to spread the teachings of Yoga in the West and the same three great souls prepared Yogananda for his mission. During his lifetime Yogananda met saints who took part in Jesus' life: Therese Neumann who was Mary Magdalene and Judas who was a disciple of Sri Ramakrishna.

Who was Yogananda at that time? Jesus himself? 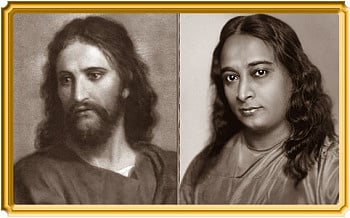 Nobody knows. Some disciples of Yogananda, including Swami Kriyananda, indeed believed that he was Jesus. Kriyanandaji even asked him the question directly: “Sir, were you Jesus Christ in a former life?” The guru replied indifferently: “What difference would it make? The Ocean is the one reality beneath all its waves.”

Why did he answer in this way? Because our limited eyes identify a guru with his outer form. But this in no way is the inner reality of any true guru. Yogananda therefore directed the disciples’ eyes to that “Ocean” of God, who is the real Guru: the one “Guru of all gurus”, the inner reality of all true gurus.

To explain it better: these true Masters are completely empty of themselves. They don’t even exist, except as in the Ocean, in God. In them, there is no ego, no “I am Yogananda”, or “I am Jesus”. They are egoless, meaning not identified at all with their human form, personality, and body, which however we see and recognize. They are in God, and God is in them. As Yogananda often put it: “I killed Yogananda long ago. No one dwells in this temple now but God.”

This is the reason why Yogananda answered: “What difference would it make? The Ocean is the one reality beneath all its waves.”

So look at God, who alone played this role, and also that role.

This being said, Yogananda revealed that he was an avatar, which indeed brings him a little closer to possibly having been Jesus. In addition he always stated to have brought back “original Christianity”. He also taught Kriya Yoga, which Jesus and the apostles had taught long ago, according to Yogananda. He even called his teachings “The Second Coming of Christ”. He also told his disciples: “Read the lives only of those in our own line: Saint Francis of Assisi, for example, and Saint Teresa of Avila.” So why would Teresa and Francis be “of our own line”? In addition Yogananda stated that his three gurus –Lahiri Mahasaya, Sri Yukteswar, Mahavatar Babaji – were the three wise men who came to visit Jesus at the manger and whom Jesus later visited in India.

Another point is interesting: Yogananda ends a talk about “Will Jesus reincarnate again?” (Man’s Eternal Quest) with a clear statement: “[The great ones] will come, because there are hosts of brothers in this world who are stumbling in the mud of delusion and suffering. The great ones have to come again, as Jesus too will come again, to take more souls to the kingdom of Heaven.” Put these words next to Yogananda’s promise to come again: “Crossing a million crags of suffering, with bleeding feet, I will come, if need be, a trillion times, as long as I know that one stray brother is left behind.”

All this is what made many of his disciples wonder: “Was Yogananda indeed Jesus?” Of course such thoughts are mostly kept private, as the entire Christian world would consider it sheer madness and fanaticism.